Danielle Kelly Predicts Quick Finish At ONE on Prime Video 4 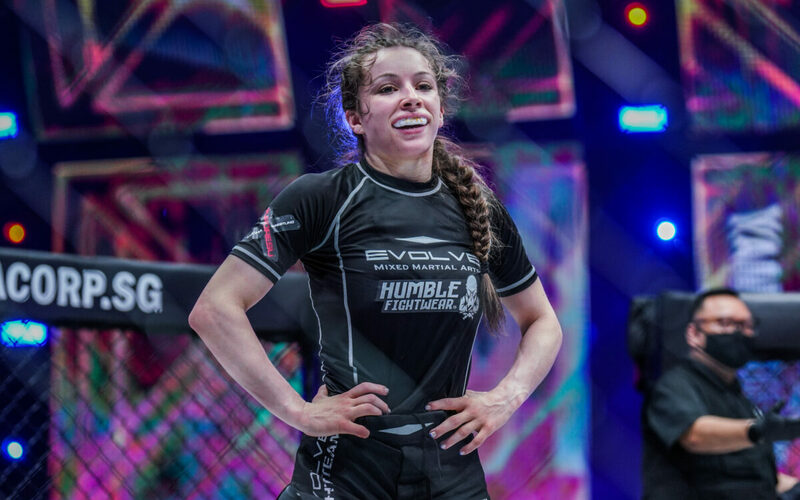 One of the brightest American grappling stars will return to the mat at ONE on Prime Video 4: Abbasov vs. Lee on Friday, November 18. Danielle Kelly will step inside the ONE Championship Circle against Mariia Molchanova for an atomweight submission grappling match on the lead card. The matchup will mark Kelly’s second match on the global stage, and she is as confident as ever that she will shine inside the Singapore Indoor Stadium.

Kelly debuted in ONE against Mei Yamaguchi in March at ONE X. Although she could not secure a submission, the matchup showed her promise against a talented veteran. Since then, she has returned to the gym to refine her game. An area of focus for the Philadelphia native has been her defense, which she believes will prepare her for all possibilities against her Russian foe.

“So I’ve been kind of keeping my training the same because I’m still studying, and I’m still training for other potential grapplers. But I have been working on a lot of defense for this one, too, so I can stay comfortable if I’m in a bad position with her. I know she might be good at certain things. But I think I’m confident and comfortable to the point where if she tries to give me an armbar or something, I’m going to be better than her and be ten steps ahead,” said Kelly.

Under the global ruleset, there is an emphasis on always attacking. There is no time to stall in submission grappling matchups, which may play in favor of the Russian. Kelly noted her opponent’s aggression in previous bouts but feels confident she will be able to defend her attacks. And without a gi on, Kelly views that as a disadvantage for her opponent that she can exploit.

“I think she’s used to relying on the grips. Just seeing her matches, a lot of her advantages over the other girls were pulling them down with the gi. And I think for this one, she’s not going to really have that advantage because we’re going to be no-gi, and I think she’s going to bank on even if I stand up or not. So, I think it would be a disadvantage to her not to have the grips,” said the American.

Kelly expressed that she sees many weaknesses in her opponent’s abilities. Perhaps the most glaring to the 26-year-old are her opponent’s mechanics. She detailed her opponent’s penchant for using brute force over technique. Kelly is confident her defenses will keep her safe until she can take control of the action if she falls into those positions.

With the technical edge, Kelly’s confidence is beaming. Never one to mince words, the atomweight grappler is not predicting a tough night at the office. With an aggressive ruleset and aggressive opponent, Kelly is calling her shot for an early first-round finish.

“I think she might stand up with me a little bit. I know that you can’t really stall in this match, so I’m definitely going to just try it. I’m definitely going to try to engage with her most on my part, but I feel like she might try to avoid engaging with me. So, I know that the rule set – for a certain amount of time, if you’re not engaging, you get a stalling point, so she’ll have no choice but to engage with me,” said Kelly.

“I’m going to say under two minutes. I’m just giving her an extra minute to be nice. Hopefully, she engages with me so it doesn’t drag out.”

ONE on Prime Video 4: Abbasov vs. Lee airs live and free for all Amazon Prime subscribers in the U.S. and Canada on Friday, November 18, at 8 p.m. ET/5 a.m. PT. Tickets for the event are on sale now at Ticketmaster.