Fury vs. Chisora 3 – Preview of an Unwanted Fight 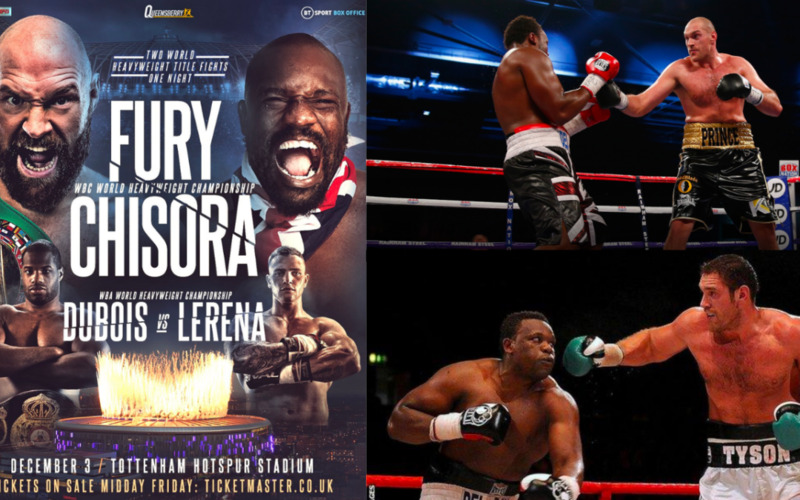 This Saturday night, December 3rd live from the Tottenham Hotspur Stadium, the WBC champion, Tyson Fury takes on a former foe, Derek Chisora, whom he’s already beaten twice, both times in a dominant fashion. 2011 marked their first meeting where Fury won a unanimous decision, dominating 117-112, 117-112 and 118-111 in a fight that was never close. Three years later, Fury won again, this time Chisora’s team retired him in the tenth round.

Their third meeting will mark Fury’s third WBC title defence and Chisora’s second chance at capturing the WBC belt. His first attempt came against Vitali Klitschko, which he lost via unanimous decision.

The reason this is an unwanted fight is that it’s a fight that makes no sense. Fury should be facing Oleksandr Usyk. Unfortunately, he isn’t. Huge rumours of Fury vs. Anthony Joshua circulated, however, despite seemingly agreeing on terms, the fight never came to fruition.

Chisora is 1-3 in his last four fights, losing to Usyk and Joseph Parker twice before bouncing back against Kubrat Pulev last time out. A singular win over Pulev shouldn’t warrant a title shot, however, that’s boxing, unfortunately.

How did we get here? The Tyson Fury Side

Let’s paint the picture. It’s April 23rd 2020, Fury has just brutally knocked out Dillian Whyte, a man who many thought could give him problems, in a little under seven rounds. He gets on the mic post-fight and announces that he’s done with boxing. He’s retiring and claimed, “I was unbeatable at this game”.

Now, let us fast-forward to August 20th. It was a huge night for British combat sports. The PFL made their London debut and Leon Edwards became only the second British fighter to capture a UFC title when he savagely knocked out P4P king, Kamaru Usman. In the world of boxing, Anthony Joshua rematched Oleksandr Usyk in Jeddah, Saudi Arabia looking to avenge only his second professional loss.

Joshua, on the night, would fail in his quest to get his belts back. He was out-classed, despite improving on his first effort. Logically, the next fight to make was Usyk vs. Fury. Fury had relinquished The Ring heavyweight title, however, kept hold of his WBC belt, proving that he wasn’t fully retired from the sport.

Usyk refused to fight Fury in December due to injuries as well as the ongoing conflict in Ukraine taking up a lot of his time. The focus then shifted to a potential Fury vs. Joshua fight, a fight that would be the biggest in British boxing history. Fury called out Joshua, Joshua accepted and fans got excited. Joshua accepted the demands of Fury, the purse split and the fight looked to be set.

The fight then simply fizzled out. No explanations, no logical reasoning why, it just never came to fruition due to contract disputes (which easily could have been solved). This left Fury with a date in December, an arena booked and no opponent to clash with.

How did we get here? The Derek Chisora Side

When Fury knocked out Whyte, Chisora was staring down the barrel of retirement himself. He was enduring three straight losses and at 38, has taken a lot of damage during his career. He’s got a ‘war’ style of boxing, been in huge clashes with Whyte, Parker, David Haye and Fury himself over a career which started in 2007.

After facing Kubrat Pulev in July of this year, never in his dreams could Chisora have predicted that he would get a shot at the WBC belt. Although it was a win, it wasn’t all that convincing, a split decision allowed him to get his hand raised.

The Fight on December 3rd

Despite trash-talk between Fury and Mahmoud Charr, the WBA (Regular) champion, talks between the two went nowhere. Then, seemingly out of nowhere, the Chisora vs. Fury trilogy bout was announced. Fury’s promoter, Frank Warren claimed that Chisora was the ‘strongest option’ for the December 3rd bout.

Fury spoke about Chisora, noting “I’m giving my old mate Derek Chisora a crack at the whip for the third time, but this time for the heavyweight championship of the world. I’m repaying the favor”.

There’s little doubt, however, that Fury is somewhat ‘touchy’ when quizzed on the legitimacy of the challenge. When YouTuber, TrueGeordie quizzed The Gypsy King on the fight, he lost it with the interviewer. He launched a strange attack on Geordie, began calling his names and got aggressive in his defence of the fight. Unfortunately for Fury, it’s clear for all to see that even he doesn’t believe that Chisora is a viable challenger.

There were better, more logical options for the WBC title bout. DraftKings have the odds as big as -3000 for Fury to win the fight, which tells you everything you need to know about how heavy a favourite the champion is. Would Daniel Dubois or Joe Joyce be as big an underdog? We highly doubt it, suggesting that despite what Frank Warren says, Chisora isn’t the strongest option.

Want a more in-depth look at our views on the fight? The MMASucka podcast crew broke it down this week on the show: