Five Fights to Make After UFC on ESPN 42 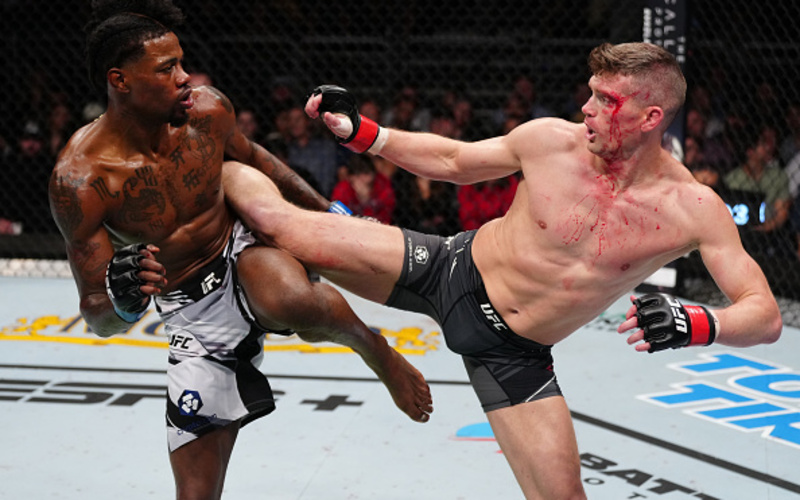 The final month of 2022 started with a bang.

UFC on ESPN 42 took place over the weekend on Saturday, December 3rd from Orlando, Florida’s Amway Center. The main card, contested on both ESPN and ESPN+, ended with seven straight finishes including a memorable five-round main event between welterweights Stephen Thompson and Kevin Holland.

A victorious Rafael dos Anjos found success in the night’s co-main event as the former UFC champion called out another former promotional champion. Flyweight Matheus Nicolau and heavyweight Sergei Pavlovich added to their growing resumes with stoppages over their respected opponents as they near their divisional peaks.  Longtime veterans Clay Guida and Michael Johnson bounced back after prior losses with decision victories on the preliminary card. Two octagon newcomers this year of Francis Marshall and Yazmin Jauregui remained undefeated opening the Orlando event with second-round knockouts.

It is time to begin planning for the upcoming months as we reach the end of 2022. Here are five fights to make after UFC on ESPN 42.

Despite less than two weeks notice, middleweight Roman Dolidze managed to have his hand raised in the second round over Jack Hermansson. His finish was nothing short of creative trapping Hermansson in a calf-slicer before reversing position and securing the technical knockout with an onslaught of ground-and-pound. Dolidze puts his name in contention for “Fighter of the Year” having additional knockouts over Kyle Daukaus in June and Phil Hawes in October. Another win would be his fifth straight as he steps closer towards cracking the division’s top ten.

The opponent whom Dolidze replaced was Derek Brunson who pulled from the pairing with Hermansson after suffering an undisclosed injury. Brunson had five straight victories from 2019 to 2021 and was likely one more shy of a title shot until he faced defeat in February this year to Jared Cannonier. The former NCAA Division II wrestler will look to return in healthy condition as the Wilmington, North Carolina native turns 39 at the start of the year.

In his post-fight interview, Dolidze did call out undefeated Khamzat Chimaev, but the fight is likely one that will not happen as Chimaev is likely due for a top five contender next. Giving Dolidze fifth-ranked Brunson would be both an exciting meeting and appropriate test.

Not long after a knockout loss to Dustin Ortiz in July of 2018, Brazil’s Matheus Nicolau was released from the promotion. Two wins later, however, saw his return to the UFC and has since made his second tenure one to remember. Nicolau has won four straight in the flyweight division and, on Saturday, earned his first knockout win since 2014 with a first-round finish of Matt Schnell. The victory for the Nova Uniao talent and season four semifinalist of The Ultimate Fighter: Brazil was the 19th of his professional career through 22 fights.

Another Brazilian who has made similar headway is that of Alexandre Pantoja. July saw one of his most impressive performances to date with quick work over Alex Perez en route to a 91 second neck crank. The win was his third in-a-row since February of last year and the tenth to his name by way of submission. Pantoja sits ranked second at 125 pounds and is on the cusp of a shot at gold.

Have this rival country pairing as a five-round title elimination bout with the winner next in line for either Deiveson Figueiredo and Brandon Moreno as the two fight a fourth time for the championship in January.

Karate defeated Kung Fu in the night’s featured main event. Stephen Thompson and Kevin Holland battled to a “Fight of the Year” contender through many back-and-forth rounds with nearly all fight-time spent in the standing position. Holland suffered a broken hand in the first round and slowly faded to Thompson’s dynamic arsenal before his corner threw in the towel between rounds four and five. The former two-time welterweight championship contender of Thompson got his first knockout since Johny Hendricks in February of 2016 while snapping a two-fight skid after unanimous decision losses to grapplers Gilbert Burns and Belal Muhammad.

Looking to make his way into welterweight’s top ten is Michel Pereira. The well-rounded athlete has put together a string of impressive wins including two decisions this year over Sanford MMA’s Andre Fialho and American Top Team’s Santiago Ponzinibbio. Pereira’s unorthodox fighting style lead to his joining with the promotion in 2019 after a wild Road FC fight against Dae Sung Kim.

A bout between Thompson and Pereira would be just right for a five-round “Fight Night” event. This gives both men an opportunity to establish their next steps at welterweight while giving fans an appealing matchup on paper.

Rafael dos Anjos had a successful return to the welterweight division. His performance was dominant from start-to-finish utilizing takedowns and top control before securing a second-round submission over Bryan Barberena by neck crank. The former UFC lightweight champion moved to 2-1 this year taking a main event decision over Renato Moicano in March while losing a main event via knockout to Rafael Fiziev in July. Dos Anjos now sits first in promotional history with over eight hours of time spent competing in the octagon (8:01:49).

In his post-fight interview, dos Anjos called for a fight against Conor McGregor. The Irish superstar and former simultaneous two-division champion saw his latest victory over Donald Cerrone in January of 2020 but followed with two technical knockout defeats to Dustin Poirier in 2021. McGregor is likely to return in 2023 as the new year will kick off in less than four weeks time.

During his championship reign, dos Anjos was supposed to fight McGregor at UFC 196 in early 2016 until he was forced out of the contest due to a foot injury. Why not try again? Let these two historic competitors headline a pay-per-view around mid-2023.

RDA looking to re-ignite the rivalry with Conor McGregor after his #UFCOrlando victory 👀 pic.twitter.com/MqdbzojF7K

A contender has unquestionably emerged. Sergei Pavlovich needed less than 60 seconds to end the night for Tai Tuivasa using dangerous punches to finish “Bam Bam” by knockout. The win was the former FNG heavyweight champion’s third of the calendar year, defeating Shamil Abdurakhimov in March and Derrick Lewis in July, and his fifth straight by knockout in the first round. Pavlovich has now won 17 of his 18 professional fights losing only in his November 2018 promotional debut to Alistair Overeem.

Current UFC heavyweight champion Francis Ngannou last defended the title in a January unification bout over then-undefeated Ciryl Gane by unanimous decision. The year, however, has been competitively inactive for the Cameroonian as he has spent time recovering from a right knee surgery to his ACL and MCL in March.

Curtis Blaydes sits in the most likely spot for the next crack at the title. However, his last fight ended just 15 seconds in after Tom Aspinall suffered a horrific knee injury. Although Pavlovich could be paired with Blaydes in a title eliminator bout, there needs to be a change of blood contending for the championship. With Ngannou awaiting his UFC return and Pavlovich riding the division’s best momentum, this meeting is only a few signatures away.

He wants his bonus! 😅