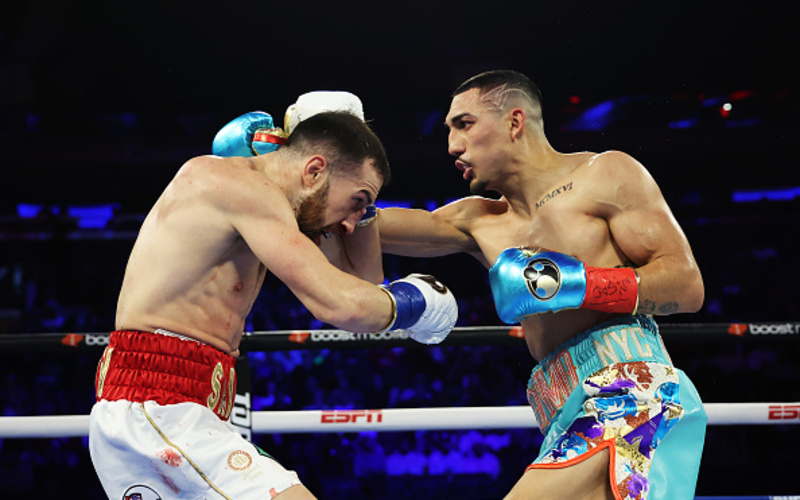 Teofimo Lopez added another on the win column in Saturday’s ESPN’s Main Event against Sandor Martin in a very underwhelming performance that resulted in a controversial decision victory for the former unified lightweight champion.

Lopez (18-1, 13 KOs) began the fight with his usual aggressive pressure, however he struggled to find success in connecting his punches and constantly was caught by Martin (40-3, 13 KOs) when he threw check hooks.

Martin proved the game-plan of landing those hooks proved to be successful, however both men suffered a clash of heads in which busted Martin’s nose which would go on to bother him throughout the bout with his breathing and constant leaking of blood.

Once the second round came, it was Lopez who was caught by a right hook that left the former champion unbalanced and dropped him for an official knockdown that set the tone for Lopez that he would be in store of a long night.

Later on, Martin once again caught Lopez with the same right hook that would once again drop Lopez, but controversially enough was not ruled a knockdown which would cost Martin heavily in the decision of the fight. Lopez salvaged his image as he was the fighter who kept going forward which must’ve swayed the judges decision.

When the scorecard were read, one judge had the bout 95-94 in favor of Martin, the second gave a 96-93 for Lopez and the most questionable decision was a 96-92 card in favor of Lopez, ruling his win as a split decision victory.

Though he may have the win recognized on his record, Lopez failed to impress and showed many flaws and limitation in his style of fighting, failing to adapt to Martin’s counters as well as failing to deliver on giving the audience any kind of entertainment value he constantly spoke about leading into the bout leaving the arena fairly quiet.

He would call on for a rematch against George Kambosos Jr, the man who gave Lopez his only career loss thus far but aside from that, what will be interesting going forward is how the perception of him will change amongst the boxing world and the fans.