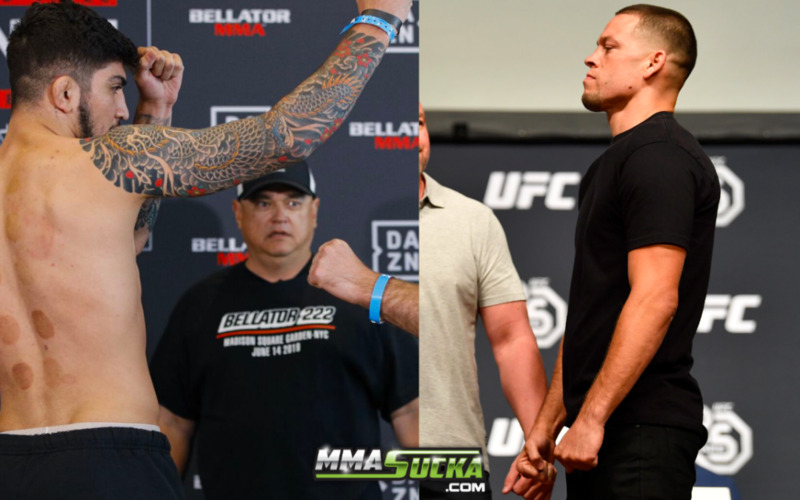 Dillon Danis is up to his old tricks. Attending The MMAHour and speaking to Ariel Helwani, many expected him to be focussed fully on his upcoming boxing debut against Youtube star and businessman, KSI. The fight will go down on a Misfits boxing & DAZN production and will take place in KSI’s home country of England. He, however, teased a potential boxing match with former foe, Nate Diaz.

During the interview in which Danis and Helwani constantly went back and forth attempting to gain points on each other, Danis described a recent run-in with Nate Diaz in New York. The two men have never seen eye to eye after Danis was ‘Team McGregor’ when Conor McGregor faced Diaz back in 2016.

The whole interview can be caught here:

Describing the incident, which occurred after UFC 281  and was captured by fans and uploaded straight to Twitter, Danis claimed that he and a member of Diaz’s team got into it inside the arena, where Diaz then threw a drink at the BJJ star.

The two were then separated before the two men got into it again outside the arena. Danis was outside talking to MMA manager, Audie Attar when he claims:

“I’m talking to Audie, and then I get hit with an empty Snapple bottle or something? So in my head there’s probably some hecklers, because there’s a bunch of fans from the UFC there. Is this a heckler or a homeless guy? And I turn around and it’s Nate, and he’s just screaming and doing shit”

The 2-0 Bellator man then went on to state:

“Apparently he [Nate] wants to have a boxing match with me after the KSI fight”, Helwani then probed him further on the matter, asking him whether he would be interested in a potential fight with Diaz, El Jefe replied “100%, MMA or boxing”.

Does a boxing or MMA match between Dillon Danis and Nate Diaz interest you? Let us know in the comments below!