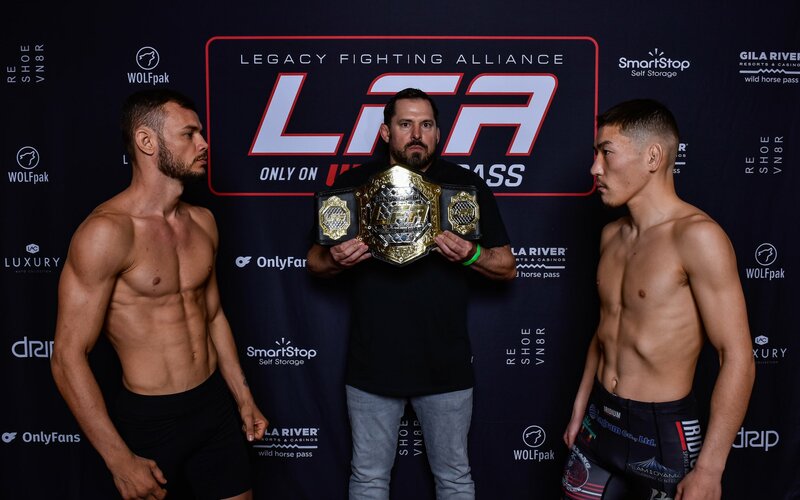 The Legacy Fighting Alliance (LFA) is set to make its return for the first time in 2023 with a seven-fight card from the Gila River Resorts & Casinos in Chandler, Ariz. The show will be headlined by a vacant flyweight championship fight between Brazil’s Felipe Bunes and Japan’s Yuma Horiuchi.

After recent company flyweight champions Charles Johnson and Carlos Mota have gone on to compete in the UFC, Bunes and Horiuchi will now vie for a crown that will most likely lead one of them on a path to the industry leading promotion later this year. Both fighters sustained highs and lows in 2022, but both men are coming off victories. Horiuchi, a one-time title challenger, last beat Juan Puerta at LFA 144 with a rear naked choke in the third round, and his last defeat came at the Road to UFC tournament when he fell to Topnoi Kiwram. He has proven durable throughout his career, however, as his last loss by way of finish came nearly a decade ago.

As for the Pitbull Brothers product Bunes, he may possess the higher quality 2022 defeat of the two, having fallen to former UFC mainstay Jussier Formiga back in February 2022 at LFA 124. The victory was the most recent for the 37-year-old Formiga, who has not retired and could be in a position to fight the winner. Bunes, meanwhile, is 2-4 in his last six contests following a 10-2 start to his career. He is the main training partner of UFC flyweight champion Deivison Figueiredo.

A flyweight title fight between Bunes and Horiuchi was originally scheduled for the LFA 144 show where Horiuchi beat Puerta.

Oddsmakers currently see Horiuchi as a -145 favorite, while Bunes can be had on most sportsbooks at a +110 price tag.

LFA 149 will be co-main evented by a fight between Marcus McGhee (5-1) and Luciano Ramos (8-7) in the bantamweight division. The 32-year-old McGhee trends older for the top fighters at 135 pounds, but has impressed with hands six fights into his professional career. The MMA Lab product look to get into the LFA win column against Ramos, an Argentine fighter who trains out of the Nick Diaz Academy and has dabbled with professional boxing matches since 2021. A victory over McGhee would bring him to 2-0 in LFA.

Elsewhere, 6-foot-6 middleweight Eric Fimbres will meet Tony Charles in a battle of west coast prospects. Meanwhile, Cedric Katambwa will look to make it 3-0 on his career when he takes on Adam Garcia at 155 pounds. Katambwa is riding a six fight winning streak dating back to his amateur days. Princeton Jackson, a 2-0 fighter out of Arizona, will open the main card against Chris Brant. Brant, who trains at The Goat Shed in Miami, Fla., will be making his professional debut.

Felipe Bunes def. Yuma Horiguchi* via TKO (strikes) at 3:46 of Round 1 — For the vacant LFA Flyweight Championship

Marcus McGhee def. Luciano Ramos via TKO (punches) at 1:40 of Round 2

Eric Fimbres def. Tony Charles via TKO (strikes) at 1:52 of Round 3

Cedric Katambwa def. Adam Garcia via TKO (injury) at 1:00 of Round 1

Princeton Jackson def. Chris Brant via Submission (RNC) at 4:09 of Round 1

*- Horiuchi is ineligible to win the championship due to missing weight

Chance Ikei def. Shad Walters via TKO in Round 2