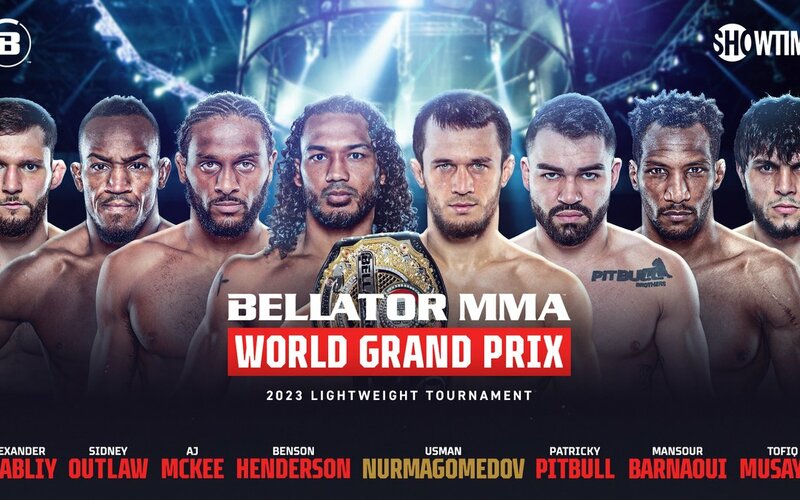 Bellator has announced a new tournament in the form of a Lightweight World Grand Prix. Bellator Lightweight Champion Usman Nurmagomedov will take part, of course in the grand prix, and his title will remain on the line throughout the tournament as it has for other titles in previous grand prix.

All Lightweight World Grand Prix bouts will be five, five-minute rounds and the official bracket and matchups are already taking shape. Fighters in the grand prix include of course Nurmagomedov but he is joined by A.J. McKee, Patricky Pitbull, Tofiq Musayev, Benson Henderson, Alexander Shabliy, Sidney Outlaw, and Mansour Barnaoui.

Introducing the competitors for our next $1,000,000 World Grand Prix. What a stacked line-up!

McKee and Pitbull will be the big names outside of the champion to see this for Bellator. McKee just re-signed with the promotion on Tuesday and now he looks to start his next chapter of brand building by winning another grand prix. For Pitbull, he will look to earn back the title that he just gave up to Nurmagomedov in November 2022 when he lost a one-sided decision.

Another name to watch who may take advantage of this chance at stardom is Mansour Barnaoui. Barnaoui is a fun fighter to watch and always looks for a finish. He has an impressive 13 submissions alongside six knockouts which brings him to an impressive 95% finishing rate. Fighters who score finishes always seem to have a better chance at winning tournaments, look no further than what A.J. McKee did at featherweight.

Filling out the roster is names like Benson Henderson who both UFC and Bellator fans will know. The rest of the bracket in Shabliy, Outlaw, and Musayev all have a great chance at taking full advantage of this grand prix and the route they need to do that is becoming clear now as well.

Bellator’s Lightweight World Grand Prix will kick off on Friday, March 10, when the promotion returns to its unofficial home at the SAP Center at San Jose. Newly crowned Lightweight World Champion Usman Nurmagomedov will defend his belt against former UFC Lightweight Champion and Bellator title challenger Benson Henderson in the main event.

Serving as the co-main event to them will be another grand prix bout between Tofiq Musayev and Alexander Shabliy in what promises to be a thrilling striking affair and may not last the full 25 minutes. Despite it being the main event, it will be scheduled for five 5-minute rounds like the Nurmagomedov-Henderson bout due to it being a grand prix fight.

A great tournament with a solid opening-round matchup based on early matchmaking by Bellator President, Scott Coker.