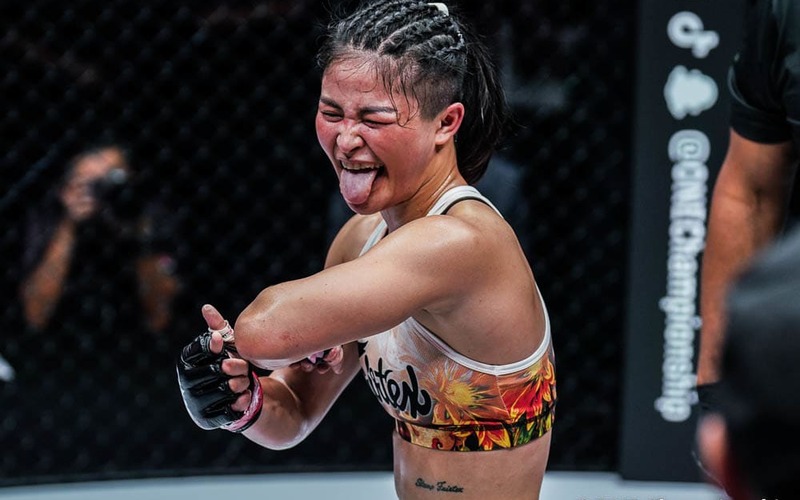 Stamp Fairtex entered the week looking at a mixed rules superfight against pound-for-pound striking great Anissa Meksen. However, Meksen failed to make the weigh-in and hydration window and was removed from the event. On less than 24 hours notice, Stamp accepted a kickboxing match in a weight class above where she usually competes.

Anna “Supergirl” Jaroonsak was scheduled for her own match at ONE Fight Night 6 against Ekaterina Vandaryeva. However, the Belarusian missed weight. The two could not come to terms on a catchweight Muay Thai scrap, and “Supergirl” welcomed a challenge against her compatriot. The bigger challenge shifted Stamp’s mindset into just having fun inside the ONE Championship Circle.

“Yes, it was a lot of pressure for me because I have got a few disadvantages in terms of the feet and also with the weight class. I think to myself that I will just do this and I will just have fun. And this will be like entertainment. Losing or winning, it doesn’t matter” said Stamp.

Without the clinch or knees, Stamp felt she was at a disadvantage. “Supergirl” tried to take over from the outset with intense forward pressure, but Stamp soon found her range and countered with powerful punches. After picking her shots and taking over in the final round, Stamp picked up the split decision victory.

In the post-match interview, Stamp called out the winner of the upcoming unification bout for the ONE Atomweight Muay Thai World Title between Allycia Hellen Rodrigues and Janet Todd. Stamp feels she has unfinished business with both women who took her striking titles. If Stamp gets her wish, 2023 could be a return to her atomweight throne.

“The first round was a bit difficult for me. I used the first round to look at the game and also find out how to plan a strategy for the second question. Yes, I called out Allycia Rodrigues and Janet Todd because I want to win the belt for kickboxing and Muay Thai” said Stamp.

But she is not looking forward to a return date with Meksen. Stamp said that she felt it was unprofessional not to show up during the testing window. The search for a new opponent left her feeling unmotivated to run it back with the French-Algerian striker.

And she is not ready to abandon her run at mixed martial arts gold either. However, Stamp is putting that pursuit on the back burner for the time being. The former two-sport World Champion understands the heartbreak of the Lee family and is giving them time to grieve. When the ONE Atomweight World Champion is ready to return to the Circle, Stamp said she would then return and chase the title.

“I would like to use this time to reclaim my title in kickboxing and Muay Thai because I still feel sad about what happened with Angela Lee and the Lee family. So that will take a while, and after a while, I’ll go back to MMA for Angela Lee” said the 25-year-old.