CHICAGO, Ill. (June 5, 2012) — To describe the career of Brett Rogers as a roller coaster ride could be considered a massive understatement. The former heavyweight title contender was at the top of the MMA food chain not long ago, but for a career that has seen the highest of highs, the lowest of lows soon followed. Only 31, heavy-handed heavyweight Brett “Da Grim” Rogers is looking for a fresh start and a new challenge with Bellator Fighting Championships.

“I am incredibly thankful to Bjorn Rebney and Bellator for giving me and my family this opportunity,” said Rogers. “I feel that I am still one of the top heavyweights in the sport and now I have the opportunity to prove it with Bellator. I love the tournament format as it will give me the chance to regain my top position, of course with a lot hard work.”

After beginning his career with a spotless 9-0 record that included eight knockout victories, Rogers, who will make his Bellator debut on Friday, June 22nd from The Mountaineer Casino Racetrack & Resort in Chester, West Virginia at Bellator 71, made his mark in the MMA world by dismantling former world champion Andrei Arlovski in convincing fashion. The win earned Rogers a fight with “The Last Emperor” Fedor Emelianenko, and all eyes were on Rogers. After a first round that saw Rogers batter and bloody Emelianenko, the Russian legend stunned Rogers with a massive right hand that put an abrupt halt to the contest.

Rogers then began a downward spiral with losses to Alistair Overeem and Josh Barnett that quickly humbled the once undefeated heavyweight. Rogers also faced issues outside of the cage, including an arrest stemming from a domestic dispute. With his legal troubles behind him and the chance to compete in a future Bellator Heavyweight Tournament, Rogers is ready to see what the future holds.

“Over the past year I have been challenged in my personal life, but all is now good in the Rogers family,” Rogers said. “Everyone makes mistakes in life but it’s how you recover that really counts. I spend every day with my wife and kids and enjoy every minute of it. Fighting is my job and I love it, but I also love my family and that’s why I made things right before returning to the cage. All I can say is get ready for a new and improved Brett Rogers.”

“I was in Chicago the night Brett Rogers came within just a few punches of dethroning The Last Emperor on a worldwide stage and I watched early in his career when he was a KO machine,” Bellator CEO & Chairman Bjorn Rebney said. “Brett’s management’s been talking to us for months about Brett. And, after talking to Brett at length, I think this could be the type of fresh start he needs to put his fighting career and other parts of his life back to where he hoped they would be.” 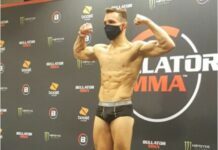 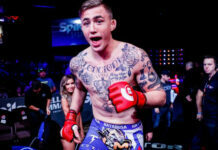