Professional fighters deserve to get paid. I harken back to the wise lyrics of a rap song by Tech N9ne, “FU Pay Me.”

I was recently reading a story about some professional American fighters who got screwed over by a certain American brand. I’m not going to throw anyone under the bus, mostly because I would like to avoid law suits. Instead I want to get to my point. I’m going to use MMA as the example, but this applies to other athletes like the Canadians who are representing my country at the Olympics.

I posted this on my Facebook and it got a bit of a response:

Giving an athlete, like a fighter, a t-shirt to wear and not offering them any sort of compensation doesn’t make them “your” fighter. They are doing YOU a favor not the other way around. Professional fighters, or even amateur athletes who are training for the Olympics need more financial support, not a “friend” who tries to piggy back on that athlete’s success. If you want to be a successful clothing brand in the fight game, start supporting the fighters with $$, not a cheap hoodie made in China. 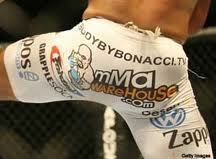 It wasn’t directed at anyone in particular but I have heard story after story of brands not living up to their end of the bargain when it comes to fighter sponsorships. If you want to be a player, in what is already a much diluted industry in professional mixed martial arts, start running your business with integrity. Start supporting the athletes that are the reason the sport is what it is today. Sure, not every fighter is going to make it to the big time, but for them to have a legitimate shot; they need to find different revenue streams so they can train as much as possible.

Personally I think the whole sponsorship idea of a business putting a logo on a fighter’s shorts is getting a little played out. Some guys will walk to the ring or cage looking like NASCAR, and I wonder how do those businesses feel about not really getting much exposure? Sure it’s great for the fighter because he and his agent/manager are making money, but what is that athlete really doing as a brand ambassador? So in that case the money thrown at the fighter is just a charitable donation and nothing more.

Fighters fight, and managers are supposed to manage and do what is best for their client. We need to get out of this old age ideology that the more sponsors the better. What you want are quality sponsors that will endorse you and you will endorse them. It should be a strategic partnership for all involved. If you are sponsored by “Douche Bag Fight Gear” you better be wearing their t-shirt in all your interviews or shouting to the heavens how much you love “Douche Bag Fight Wear.” You become their representative and spokesperson for the duration of the sponsorship agreement.

I know of some great companies who will give a substantial discount on services a fighter may deem as useful, that is another way to go, but in the end it’s all about the Benjamins Baby. A high level athlete should not be promoting your business for free. That sponsor has a responsibility to pay for that advertising and help push that fighter’s brand too.

That is something a lot of people forget. A fighter is also a brand and should be treated as such. Unfortunately a lot of athletes get taken advantage of because they would rather be training than dealing with the business side of things. Whether it is companies who don’t pay up or shady managers who take more than they should, an athlete should not be burdened with that kind of stress. At the end of the day the athlete’s  business is to make sure they are 100% ready physically and mentally to perform at their best. Having to stress or worry about money, knocks a few percentage points off that readiness meter.

Companies who don’t pay these athletes are doing nothing but exploitation. That isn’t a harsh way of putting it, it’s the truth. Some fighters get roped into rep’ing a clothing line in exchange for…clothing. If they are happy with that trade off fine that is their prerogative, but that is not a win/win situation as someone so eloquently commented on my Facebook post.

The bigger picture is that company is using the hard work that athlete has put in to try and get noticed. Giving that fighter clothing isn’t going to pay for training or put food on the table. Meanwhile that company is selling hoodies at some ridiculous marked up price and pocketing the money to pay for more cheaply made overseas gear so that they can continue to profit.

The point of this column is directed towards fighters and managers who are trying to make a go of it in the professional ranks. Don’t complain that you’re not getting paid when you agree to endorsement deals that pay you in product. Their support should be measured in dollar signs and promotion.

Call me a capitalist, but Tech N9ne’s philosophy on business pretty much sums it all up. In a recent interview on BJPenn.com, Tristar head trainer Firas Zahabi spoke about a new initiative called FundaFighter.com.

The first guy to come up with the idea was the late, great Evan Tanner. He didn’t want to deal with corporate sponsors. I had never heard of the concept before until the owner of the building that houses Tri-Star, Robbie Stein, brought it to my attention. He came across a website called KickStarter which helps people find funding for an invention or if they were looking to publish a book or produce a film. We were constantly looking for sponsors to help our fighters financially and we figured that this is something that would work in MMA.

Although this project is in the beginning stages it is one channel or opportunity for fighters to make some extra coin. Firas believes that with the popularity of the sport and fans wanting to connect with the athletes, the Fundafighter.com initiative allows them to help the athlete get through training camp and not have to always rely on fight purses alone. It’s an interesting concept.

This is a great way to help fund our fighters and get them through all of their fight camps while at the same time increasing the relationships the fans already have with the fighters. Going through a camp is very demanding on a fighter and when they have to work a full-time job to support themselves it can have an effect on how much they grow as a mixed martial artist. They need to eat right and live right. They only get so much from their purses and most of the time it’s not enough to live on.

I will conclude this column? Rant? Whatever we want to call it, with this:

Dear business owners, enough with the exploitation of athletes. They are not training and competing so you can make a penny off their back. A true partnership is supporting what they do so they can promote what you do. If you can’t follow that simple ideology you are no different than a pimp and you will never make it.

Dear athletes, market who you are. Go out and promote yourself, get a website, use social media, YouTube, and get on the radio. Find a manager who knows what the “F” he is doing and not some friend of yours who has a degree in basket weaving or thuganomics. But please, there is a line that one must walk when it comes to self-promotion. If you are 2-0 or 0-0, or 0-5, professionally, you are not the second coming of George St. Pierre yet. However, that said, get out there and make yourself marketable so businesses want to invest in you.  Train hard and win. This is a results driven business.

Trying to make it in the world of professional mixed martial arts is a grind. Some will still have to work a  job they may not love or sleep on a friend’s couch. It’s the sacrifice one has to make to try and reach the ultimate goal.  However, don’t sell out unless someone is ready to make it worth your while. MMASucka’s Micah Brakefield, who writes a very riveting blog about his life as a fighter called “Road to the Pros”, put it, “If the economy crashes and its rebuilt on t-shirts, MMA fighters are set!”