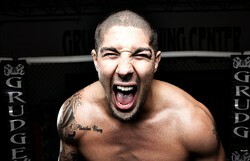 The lone heavyweight bout on UFC 165’s main card was certainly a shocker. Many people pegged Matt Mitrione to win due to Brendan Schaub’s suspect chin, but things went pretty much the opposite of what was expected. Schaub took control early, and was able to get the submission victory. Now MMASucka.com has the shocking highlights.

UFC 165 occured on September 21st, emanating from Toronto, ON’s Air Canada Centre. The main event saw Light Heavyweight Champion Jon Jones manage to eke out a decision victory after being taken to the limit by challenger Alexander Gustafsson. Stay tuned to MMASucka.com for more on this and other events.