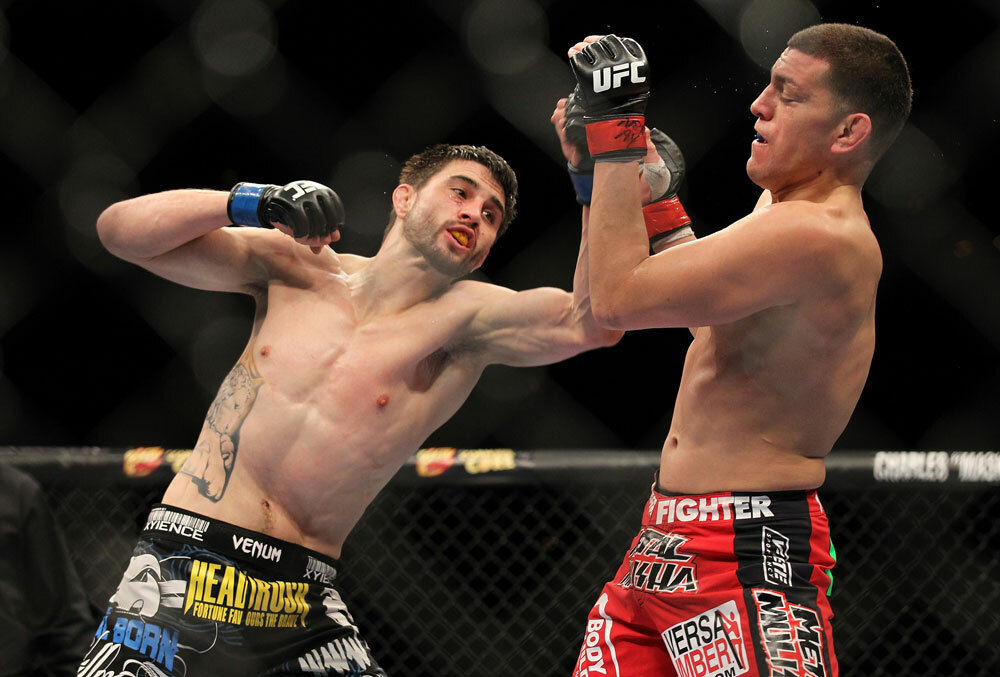 Thank God for Carlos Condit! Last Saturday night at UFC Fight Night 67 we saw the return of the “Natural Born Killer” and we missed him.

Mixed Martial Arts is an exciting sport, but over the years we have seen a lot of fights and fighters bore us to sleep as they sleepwalked to a victory or a loss…who really remembers the outcome because those fights usually become forgettable.

A prime example was the fight between Francimar Barroso and Canadian Ryan Jimmo last weekend. That bout got a bonus for fridge break of the night. Both men received complementary breakfasts as they spent the evening making out in the cage. Jimmo, who is a really nice guy and soft spoken, fights like his personality. It’s too bad, but I think Ryan stamped his walking papers to the WSOF or Bellator.

Back to Condit. The welterweight division was put on notice after the Albuquerque native returned after a year on the shelf recovering from a knee injury he sustained at UFC 171. Not only did he take Thiago Alves to the woodshed and beat him, but he signed off on the bout with his signature elbows to Alves’s nose.

The UFC needs more Carlos Condits who aren’t afraid to get in there and get after it. The division as a whole has felt a resurgence since GSP packed his Gi, and Gatorade to the safe confines of his Igloo in Montreal. Having the dominant French Canadian no longer on top is something Condit sees as a real opportunity.

“I think GSP stepping aside has electrified the division,” Condit told MMASucka.com. “Everybody is hungry and there isn’t this one dominant guy who sits at the top.

“Now I think guys in the top five or even the top ten can beat anyone on any given night.”

He’s right because as much as we loved Georges, his style was something that many people were trying to emulate which made for boring ass fights. There is nothing wrong with trying to win a fight any way possible. But there is something about point-fighting that just doesn’t sell the sport like it should.

There needs to be some style, some sizzle to the steak and it’s something guys like Carlos Condit, Robbie Lawler, Johny Hendricks and at times Rory MacDonald do when they get into the Octagon.

After sealing the victory in Brazil, Condit called out the winner of the welterweight title fight that is set to go down on July 11th on a stacked UFC 181 card. Champ Robbie Lawler will be putting his title on the line against Rory MacDonald and Condit wants the man who comes out of the Octagon with the strap.

“I want whoever has the title in a couple of months…Whether it’s Rory or Robbie, I want that guy,” Condit told media at the UFC Fight Night 67 post fight press conference.

Now whether or not you think Condit deserves a title shot is your own opinion. But here is mine. He needs a win or two before he can work his way back into title contention.

He has three losses in his past five fights, not something title contenders can really bring into a meeting with Joe Silva or Dana White when bidding for a shot. What Condit does have though is an exciting fighting style, a name, and a win over Rory MacDonald.

If Rory beats Lawler in July, then maybe, just maybe the Canadian will call for a rematch with Condit to revenge a loss that still probably eats away at him. It’s a money fight that the UFC could be tempted to cash in on.

So if you’re going to call out those two guys, who does Condit believe will walk out of the Octagon with the welterweight title?

“I think Rory is going to be a little less reserved in this fight; although that works very well for him in a lot of his fights, where he is just super technical, he almost has like a clinical approach to it,” Condit explained on Sucka Radio.” But against a vet like Robbie Lawler it didn’t work and Robbie was able to find his moments and do some pretty good damage. I see Rory coming out a little more aggressive, trying to push the pace and taking more risks than he did in the first fight. I don’t know who is going to win but I think it will be a bit more exciting than their first match.”

So Carlos waits for who’s next. In my humble opinion if he wants a more direct road to a title shot instead of waiting why not call out Johny Hendricks for another dance?

If we are going to talk about money fights, their epic battle at UFC 158 was one hell of a barn burner. It was fight of the night and although Hendricks came out with the unanimous decision, it is a rematch that most fans would love to see.

Whether it’s Hendricks, Woodley or even the winner of Matt Brown and Tim Means, it’s nice to see the Natural Born Killer back and doing what he always does. Killing it.