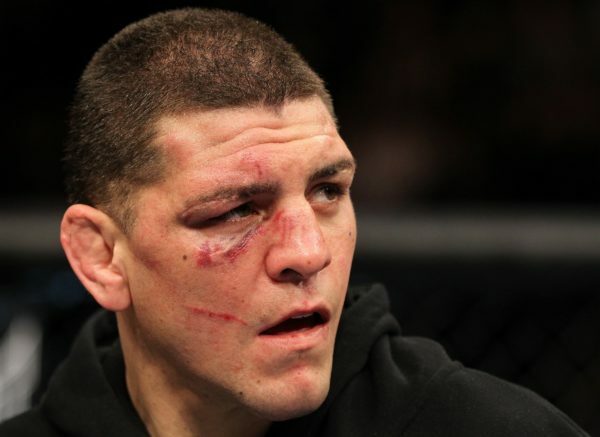 On September 14, Nick Diaz sat in front of the Nevada State Athletic Commission to hear his fate after failing his post-fight drug test against Anderson Silva at UFC 183.

His elevated marijuana metabolites resulted in a five year suspension and a $165,000 fine.

A number of fighters have refused to fight in Las Vegas in support of Diaz and the #FreeNickDiaz movement. Now Jason Heit of the Shadow Mountain Medicinal Society has taken things one step further and released the following statement.

“I am a former Canadian Boxing Champion, retired professional boxer and mixed martial artist, prescribed medical cannabis patient, and a health and wellness advisor at the Shadow Mountain Medicinal Society. I am a prescribed patient of medical marijuana because of injuries suffered in my profession. I was prescribed non-steroidal anti-inflammatory medication for years that hurt my stomach. I now use a topical cannabis cream that takes away the inflammation and pain.

I volunteer my mornings at the dispensary where our team provides patients access to medical cannabis. To become a prescribed patient for medical cannabis one must go through a screening process with a doctor and pharmacist.  National Access Cannabis is there to help them navigate Canada’s Cannabis Medical Access Program. If they qualify, they are prescribed medication, and can then come see us at our dispensaries. We provide clean, quality tested products, offer a supportive ear and help our clients with advice.

I reached out to Nick Diaz to let him know about the patients I see who are persecuted every day for choosing this medicine. I let him know how many other people out there are in his position and that he is an inspiration for us all. I also let him know we are going to support not only him but others that are being persecuted. Nick was thankful and replied, “I know I’ve been fighting for something for a long time, but I didn’t realize this is what I’m fighting for until now. I’m happy to fight for other people in this position.”

After speaking with Nick, I reached out to advocate Ted Smith who is responsible for the recently changed laws in Canada with his recent victory in the Supreme Court of Canada allowing the right to use products other than dried cannabis.  Ted and Owen Smith were found not guilty after they were charged for baking edibles for cannabis patients. Ted said, “I will always be available to support cannabis patient.”

I also reached out to Dieter McPherson of the Canadian Association of Medical Dispensaries who also offered his support. Dieter spoke about the studies of treatment of concussions and injuries with cannabis and was surprised of the ignorance of the fight commissions. Together we have come together in a unified voice to help stand up for people who continue to be persecuted for their choice of medicine.

No one deserves to be judged, persecuted, shamed or punished for wanting pain relief from a legal, safe medicine.

We are calling on all members of Shadow Mountain Medical Society, National Access Cannabis, Leafly, the Cannabis Buyers Club of Canada, CANLIO, Cannabis Digest, the Canadian Association of Medical Cannabis Dispensaries and anyone else who wants to end of persecution of Medical Cannabis prescribed patients. We have a unified group in boycotting all Nevada State Athletic events until they drop the punishment and fine, and allow an exemption for prescribed medical cannabis patients.

Shadow Mountain Medicinal Society is dedicated to the protection of medical cannabis patients. We support patients of our community who exercise their legal right to choose cannabis medicinally. Together, we stand for good solutions, good medicine and sound decisions. We will continue to stand until our right to choose this safe and effective medicine is both respected and protected.”