From the streets to the cage – Robin Laybourn a true champion

For some people, getting up in the morning is the hardest thing to do. For others, it could be getting into the gym or not eating that tasty donut. When you think of a mixed martial arts fighter, you don’t often think of drugs and rehab being the hardest part of their day.

Kicking off the Battlefield Fight League 39 main card was an amateur bout for the vacant light heavyweight championship. Robin Laybourn took on Josh Morgan and was able to finish the fight in just two-minutes and thirty-four seconds.

Following the bout, Laybourn had an emotional post-fight speech with BFL commentator Darcy McBride. One thing he said that stood out was, “I shouldn’t even be here.”

“Well the reason that I said that, and I don’t mind saying it in an open form like that, is because I’m a recovered drug addict myself,” Laybourn told MMASucka.com. “I was about as hopeless of a cocaine addict that you could ever be you know? In and out of jail, treatment centres, the worst you could ever imagine. And I think I went through detox and rehab probably 50 times before I finally got it. And when I said ‘I shouldn’t be here,’ I meant I really shouldn’t be there. I made dangerous decision, I put myself in. if you talk to any close friends or family they’ll say its an absolute miracle I’m even alive so that’s what I meant by that. When I did decide to clean up, one of the things that helped me hold my attention and stay away from the drugs was stepping into an MMA class. I had already held a pretty high belt in Tae Kwon Do when I was a young kid but other than that I had no real martial arts experience. So trying to stay clean, and battle with all that I went into this MMA class. At that point I was 315lbs when I first went into an MMA class so I just started training and all that was just a little gym then I ended up training under Kalib Starnes for 4 years. Throughout training with him he helped me lose a lot of weight and the reason I brought my wife in the cage was because she recovered with me, she recovered with me which is even more against the odds than normal. So we both pulled ourselves out of that together, and I brought her in because she makes a ton of sacrifices for me to do this and she’s also a national level figure competitor. She just made nationals in her second year of trying it.”

When he said he was lucky to be there, that was the closest thing to the truth. Addiction can be tough to overcome and it didn’t happen overnight for the 36-year-old. In fact, it took him almost ten years.

“I got into hard drug use when I was probably 14 and it took me until 22 to stop that.”

MMA gave Laybourn an outlet and one that has been able to keep him occupied and driven. He is able to take what he has learned not just in the gym, but also on the streets and give back to those in need.

There is a way out and Laybourn is proof.

“I very much am (lucky to be around). A lot of terrible things happened in the midst of that and everybody’s got a story and fortunately that story for me is one of my greatest assets now because I have something to offer to other people that suffer with the same thing. I’m living proof that it’s not necessarily the only way it has to be, there is a way out, but when you’re in that place it’s hard to see the way out.”

Not only were drugs a problem for the Ryan’s MMA fighter, he battled an eating addiction as well. He came into the sport of MMA at an astounding 315-pounds.

He got his first amateur experience on a local card at super heavyweight. He was able to cut down to light heavyweight for his last two bouts and looked as impressive as one can. Don’t look for him to cut down to 185-pounds any time soon though.

“My very first amateur fight was on a Gerry Gionco card as a super heavyweight at 285lbs and the guy I fought had to weight 300 at least. My second fight I cut down to 265 so that was my first time cutting and I fought heavyweight all my fights up until my last two fights at light heavyweight.

“I’m not allowed to go any lower, my wife will kill me. She won’t let me cut down to 185 she’s made it very clear that she’s not down for that,” Laybourn said. “She said I look to skinny at 205. I cut to 205, I walk in the cage around 220-223. It was substantial enough, I dieted down and depleted and the morning of I cut down 10 pounds. Having a wife in fitness at that level helps so much. All my meals are prepared I wouldn’t be able to do it without her. And me being a heavy guy and having problem with weight, you’ll probably get a kick out of this I’m standing in my bedroom, we padlock my bedroom at night because if we don’t all the kids snacks go missing. So that’s how committed I am to trying, and the one thing that I’ve always prided myself is that there is always going to be failures but you got to keep trying you know? I’m a food addict man, I have to pad lock myself in my room and my wife hides the key from me and lets me out in the morning because if not about 1,000-1,500 calories get consumed in my sleep.”

Laybourn has a family at home — a wife and four kids, plus he’s 36-years old and owns his own commercial painting company. He is the true definition of a hard working man. When he hears guys at the gym say they are too busy to train, he gives them a smirk and it makes him train that much harder.

The man came from such a hard past that has put some miles on his body, but in his late thirties he has accomplished a lot more than many people that are on this planet and again — he wasn’t expected to be here.

“Well what it is, I love hard work but at the same time I’m 36 years old and prior to getting into MMA, I didn’t have the perfect life. I put a lot of miles on my body and one of the things that I struggle with the most is that for so many years ive been getting into the fighting that my wife and kids are sacrificing their time with me so I can pursue that goal and my wife is in nationals and my kids are in the B.C arena cross circuit and as much as I’m getting ready for my competition, they’re getting ready to become champions as well and they require my time and support as much as I require theirs and it’s important for me to find that balance and make sure I give them the time they need to reach the goals in their sport. When I was set to fight for 205 belt about a year ago, I cancelled the fight because like about a year and a half or so again I snapped my Achilles tendon in half, I felt my tendon tear a little and I just got nervous because I don’t get paid to go in there and do it I do it for the love and im a family man with a business and I couldn’t afford to take the risk of hurting myself and not being able to work.” 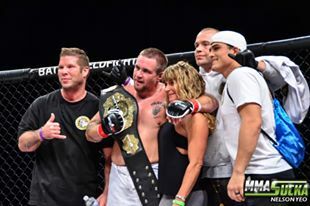 As I said, MMA has given a lot to Laybourn. He has brought himself up off the ground, he has given up on the junk food and found a new love for life. The sport has let the BFL amateur 205-pound champion have a focus that is not on something that will take him down the wrong path and lead him in the right direction.

“What it’s done for me is obviously, first and foremost, once I got past training for fun so to speak and started competing it brought direction and focus to me who generally is unfocused in areas as health and fitness and eating well,” stated Laybourn. “It gave me the goal I needed that meant enough for me to make the sacrifices. I’m not going to eat this junk food, or do this because I want this more you know? It brought direction and purpose in that aspect in my life when I couldn’t seem to find it. I met so many great people through it and meeting people so nice and fighters are really dynamic sorts of people. I’ve met a lot of good people and great friends I also lost 100 freakin pounds that was one of the biggest things in my life for sure. I talk about my family my kids, you walk 100 pounds overweight you aren’t going to be around long enough to see them so that was a huge thing for me. And honestly it gave me direction and something to do when otherwise, my mind would stray and I was caught in addiction and the wrong side of the tracks for so many years and I tried so many times to get my act together and failed over and over about 50 or 60 times. And when I found MMA I don’t think it was the only thing but it was a thing that was put in my life for me to get that energy out. I was like okay I got to get up and do things for my family my business and then go train at the MMA gym it gave me a passion and a feeling that’s never been matched like a high. When I got that belt wrapped around my waist it was probably the best high I’ve had.”

Following the title victory, it seemed as though Laybourn was going to step away from the cage to focus on family and life. However it seems as though you may be seeing him defend his strap soon rather than later.

“Probably sooner the better, I’m not getting any younger.”