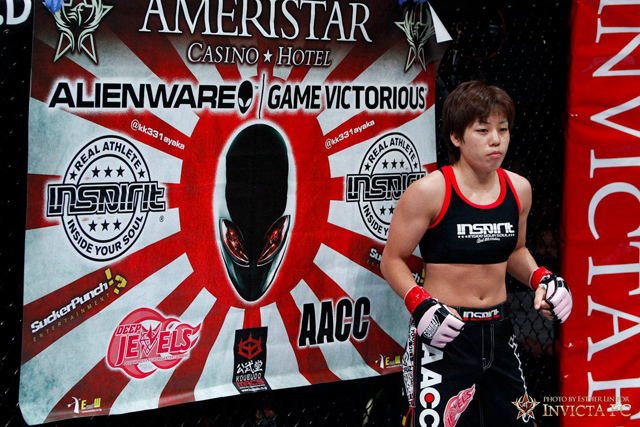 Japanese Atomweight champion Ayaka Hamasaki faces off against challenger American Amber “The Bully” Brown in her first Invicta FC title defense after winning the belt last July, beating Herica Tiburcio by split decision. Ayaka (12-1) hails from the gym AACC in the heart of Tokyo, Japan. Her only loss is to now UFC contender Claudia Gadelha in 2013. Up until now, she’s fought mostly top contenders in the strawweight division (115 lbs) in her career which was mostly in Jewels and DEEP in Japan until her Invicta debut in 2012 where she continued to show her mettle.

She dropped to Atomweight (105) to challenge Herica Tiburcio for the belt.

Japanese fighters are notorious for walking around close to their fight weight and not cutting much weight. This turns out to be disadvantageous when fighting overseas, especially in America, where the wrestling culture inspires drastic weight cuts. Ayaka was similar when fighting at 115.

“I decided to drop weight classes because my body is small compared to foreigners,'” she said. “Plus my knee was bad at the time. Now I’m getting a little bigger through physical training, though. I don’t really pay attention to how much I weigh on a daily basis not during fight camp. I’d say that I do cut a lot of weight, but not to the degree that I suffer too much.”

The MMA scene in Japan has been evolving over recent years.

“There are Japanese fighters who cut a lot of water weight,” Hamasaki commented. “However, their methods don’t really agree with me, so I don’t cut as much water weight as them.”

Historically, major MMA events took place in rings, such as in Pride, Shooto, Dream, HEROES, Pancrase, and DEEP. With the explosion of MMA around the world, caged events began popping up in Japan. Japanese gyms are adding cages, or sections of cages to their gyms, which is difficult due to limited space in the crowded cities. A few years ago, the AACC gym, which had only a boxing ring and grappling mats to practice on, installed a wall of caging. This is obviously a great boon to its fighters.

“I practice defense on the cage, and that allows me to simulate actual fight situations in sparring, so it’s great,” Ayaka said.

The majority of Japanese promotions had previously prohibited the use of elbow strikes, so the only fighters who had to practice were fighters who fought overseas. In an interview in 2012, Ayaka admitted to not feeling comfortable throwing them in a fight, despite knowing they were allowed. Things have changed. “Nowadays I pay attention to using them in sparring, and I practice elbows on mitts, so I’ve become able to use them during fights,” she said.

Ayaka first started martial arts with Judo in high school. She trained for nine years, and during that time won an international competition. After school, she wanted to continue something, and her friend took her to the AACC (Abe Ani’s Combat Club). There, she got hooked on MMA. About two years afterwards, she competed in her first amateur competition under the “Jewels” promotion. She had three amateur Jewels fights and then went pro in 2009 in Shooto. It’s often hard for grapplers to make a smooth transition to becoming an well-rounded fighter proficient in striking, and often fall into the trap of trying to force a knock out to prove that they can do it.

The 33 year-old knows she won’t have an easy fight with Amber. The tough boxer-turned-MMA fighter has finished 4 out of her 6 wins, three by submission. Brown’s latest win was against Shino VanHoose this past January by guillotine choke.

“My impression of Amber Brown is that she has strong striking and a lot of power,” said Ayaka. “Her grappling has gotten even better since the last time I saw her fight in Japan. But I believe if I fight the way I want, I’ll be able to win. I’m training a lot of striking and grappling for this fight. Amber is a formidable opponent, but I’m ready for her!”

Do fans recognize this champion on the streets?

Ayaka gave her reply with a laugh. “Fans don’t really approach me in Japan. People talk to me more in America!”

She works a 9-5 job five days a week, and heads to the gym after work.

“This is my first title defense so I feel a little pressure, but I’m looking forward to it. I’m excited to be fighting in Vegas!”

The event will stream live and exclusively on UFC Fight Pass beginning at 5:30/8:30 PM PT/ET.

Tickets are available for purchase at the Tropicana Las Vegas Show Tickets desk by calling 800-829-9034, or online at troplv.com.