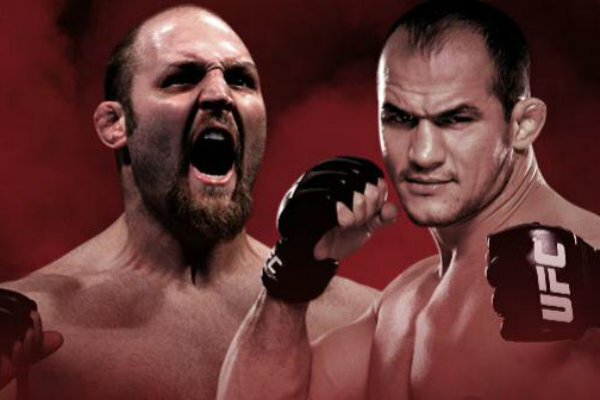 The UFC is back this Sunday afternoon following a brief period of inactivity—competitively speaking—albeit with a rather top-heavy offering in their first excursion into the sovereign European state of Croatia. Headlining the card is a pivotal contest between the phoenix of the heavyweight division, Ben Rothwell, whose UFC tenure until 2014 was one that didn’t quite indicate greatness on the horizon, and former heavyweight champion Junior Dos Santos, whose record since December 2012 has alternated wins and losses—the two most recent of which coming by way of until-then unprecedented TKO stoppages.

Aside from a heavyweight co-main event between UFC staple Gabriel Gonzaga, whose presence on the card might just be to solicit ire from fans of Mirko “Cro Cop” Flipovic, and Derrick Lewis, UFC: Zagreb is lite on casual fare. But for hardcore fans it’s just another day at the office with the added allure of possibly uncovering a gem otherwise hidden in the UFC’s elastic ranks.

Here are my predictions for the entire card, in five sentences or less per fight.

#4 “Big” Ben Rothwell vs. #5 Junior “Cigano” Dos Santos: The formula for losing to Junior Dos Santos (17-4), at least until his last bout, was as such: stand at boxing distance with him for any extended period. Then we saw Alistair Overeem do precisely that and succeed. Ben Rothwell (36-9) has neither the speed nor the style to pull off what “The Reem” managed to, so his options are seemingly narrowed down to either Cain Velasquez’s approach in his and Dos Santos’s second and third contests—smothering “Cigano” against the cage while landing strikes in close proximity, eroding his defenses until there’s nothing left—or devise an altogether new approach to taking on the Brazilian bruiser. Rothwell has been on a tear through the heavyweight division and the timing is ideal for him to overtake a perennially elite fighter, as Dos Santos’s wear and tear is showing. Look for Ben to rely on power over finesse and secure a surprise TKO victory within the first two rounds. Rothwell by TKO.

Derrick “The Black Beast” Lewis vs. Gabriel “Napao” Gonzaga: While both men hit extremely hard, neither do their finest work while vertical. Now in his 13th year of professional competition, Gabriel Gonzaga (17-10) has faced the best of the heavyweight division for two generations’ worth of talent and has come as close as any also-ran to capturing the title. Lewis (18-5) is a comparative neophyte who, with the exception of a knockout over Jared Rosholt, has seemed largely incapable of entering the contenders’ circle. Fortunately for him, “Napao’s” chin isn’t quite what it once was. That should afford “The Black Beast” more competitive room than he would have gotten three or four years ago, but it still will likely fall short of what he needs to end the still savvy Brazilian’s afternoon early. Gonzaga by SUB.

Francis “The Predator” Ngannou vs. Curtis “Razor” Blaydes: A clash between two heavyweight prospects, both under 30 years of age, who have thus far never had their hands raised based on a decision? Sounds like a solid time to me. The six-four Ngannou (6-1), who coming off of a second-round knockout win in his UFC debut back in December, is largely reliant on kickboxing (but versed on the ground enough to have secured both choke and joint-based submissions). He’ll want to keep the fight standing against Blaydes (5-0), a JUCO national titlist from Harper College, who recently got the call up after strong showings in Ed Soares’s Resurrection Fighting Alliance. This one’s a close call, but I have to err on the side of MMA’s transitional gold standard: wrestling. Blaydes by UD.

Timothy Johnson vs. Marcin “Tybur” Tybura: In another heavyweight scrap, we find big top strongman Timothy Johnson (9-2) taking on Marcin Tybura (13-1), a former M-1 champion whose grappling prowess led him to an almost undefeated run in Russia’s premiere MMA league. (He lost due to foot injury to Germany’s Stephan Puetz in May.) Johnson will be the considerably larger fighter on fight night, as he typically weighs in at the heavyweight limit of 265 pounds. However, in terms of finesse, Tybura should hold the advantage. Neither man holds one-punch knockout power, so this contest boils down to versatility, which will likely favor the debuting Pole. Tybura by TKO.

Igor “The Duke” Pokrajac vs. Jan Blachowicz: Following a less-than stellar run in the UFC, Igor “The Duke” Pokrajac (28-12) returned to competing in his native Croatia and rattled off three impressive first-round finishes that earned him an invitation to compete once more in the Octagon. At 37 years old, he’s an old but dangerous dog whose power has yet to diminish. Blachowicz (18-5) is well-rounded and defensively quite sound and should hold his own, but the surging Croat is fighting in his home town and still has the ability to melt opponents with a single strike. Pokrajac by TKO.