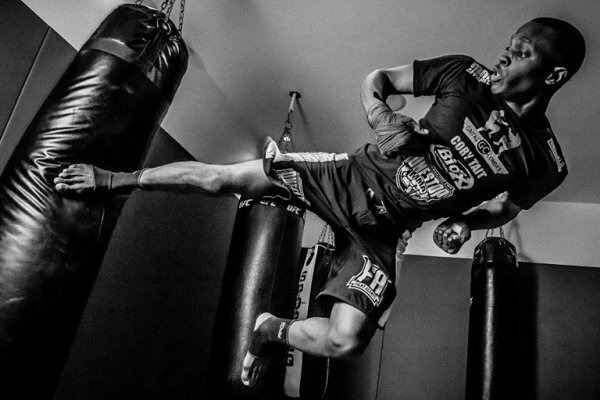 Since his professional debut in 2010, former UCMMA featherweight and bantamweight champion Cory “Capcom” Tait (8-3) has remained one of the most dynamic and thrilling fighters competing across the pond. The 28-year-old British dynamo is a veritable finishing machine whose methodology is marked by nuance; all eight of his victories are split down the middle—four and four—in terms of knockouts and submissions.

Cory Tait on his Titan FC 38 debut this weekend: “In my head, Saturday’s the day that I die, so I have to give everything”

He grew up a combative wunderkind, earning a black belt in Tae Kwon Do by the age of 10 and capturing numerous kickboxing titles before transitioning into mixed martial arts at the age of 18. Groomed for battle from an early age under the watchful eye of former international no-holds-barred champion Gintas Bukauskas, he later moved to UFC light heavyweight Jimi Manuwa’s Lion’s Pride MMA for a spell to broaden his range of training partners and explore further avenues of artful violence.

Despite his fan-friendly style, Tait has remained largely out of public view since his last fight, which took place at Cage Warriors 72 in September 2014. In the interim, he inked a new deal with Titan Fighting Championship signed on with Boca Raton, Florida’s Blackzilians as a member of their unofficial subgroup, the Ukilians, a squad of UK fighters representing the team stateside and abroad.

This Saturday, April 30, Cory “Capcom” Tait is set to make his United States debut against Andrew “The Beast” Whitney (12-4) at Titan FC 38: Carl vs. Muhammad in Miami, Florida. The event will stream live on UFC Fight Pass.

MMASucka.com recently caught up with Tait to talk about his upcoming fight, his future aspirations, integrating with the Blackzilians, what took him so long to get back in the cage and much more.

MMASUCKA.COM: Your bio on Wikipedia says that when you were younger you competed in several amateur grappling competitions. Do you remember which ones those were?
Cory Tait: It wasn’t anything big. It wasn’t anything major. At the time I was just kind of finding my feet with the grappling stuff. UK MMA. Yeah, pretty much if you just call it that everyone back home will know what you mean.

Well, maybe they weren’t a big deal, but I saw that in your second-to-last fight with Cage Warriors you took on James Pennington, whose strong suit was grappling. Yours, at least going into the fight, was perceived to be striking-based. And you submitted the dude in the first two-and-a-half minutes, if I’m not mistaken.
Yeah, that is my little ace in the hole. People forget about it. This is MMA, you know. I do like to strike. I do love it. But if I can wrap a neck or take an arm or leg, I’ve gotten submissions with them all. I’ll take ‘em. Anyone who thinks I’m just a striker now, they’re just misinformed—and badly. That’s my bonus. I wish that they would do that.

Did you want to fight him where his strengths were or was that just how it played out?
Well, Pennington… It’s a funny story with him. I met him maybe a year or two before we fought and, again, I’m not a hostile person, but when I met him he seemed to have a chip on his shoulder towards me and I just didn’t like that. But I always knew that one of these days, if he’s as good as he is—I was on the come-up at the time—more than likely we were going to meet each other. And when that chance happens I’m fucking jumping on it. I did actually want to knock him out, but I could see that he was kind of intimidated by my strikes and would rather grapple. So rather than me trying to get back to my feet each and every time… Well yeah, you saw the fight. I hurt him with a knee. He thought I was going to try to break away and I ended up sweeping him and hitting him with one elbow and he basically gave me that guillotine.

I thought it was kind of poetic in a way.
Yeah. Thank you. That’s a good way to put it: poetry in motion.

You said in interview with BloodyElbow.com (this was, I think, prior to your last fight), when asked about signing with Bellator MMA, that you were essentially not interested with signing with anyone but the UFC. You weren’t interested in signing with another promotion. But now you’re signed with Titan FC. Is that perhaps because they have a built-in “Zuffa-out” clause, or was it more because you wanted to expedite your entry into the U.S. market and get your name spoken around here a little more?
It was a bit more that, to be honest. I came out here, got signed with the Blackzilians and I’m just looking forward to fighting. It’s been so long since I fought. Things back home didn’t really go my way in terms of my gym, my coaches and stuff like that. I’m still good with a lot of gyms that I have been to. Lion’s Pride with Jimi Manuwa—shout out to them. But my primary base where I was training, that kind of got shut down so I came out here to just try to keep my name in the game and, again, America is where it’s at for MMA. It just made sense to me to get out here and try and get onto a good show.

Titan’s doing a lot. They’ve obviously got their ties with the UFC and I’m more than happy to get in with that. I mean, Bellator’s not a bad promotion, but then again everybody thinks of the top and when I think of the top, I do think of the UFC. I’m just happy that I can get back in, get back in with Titan at the moment and just take it a fight at a time.

How have you acclimated to being with the Blackzilians? You were with your old coach, Gintas Bukauskas, for quite a long time.
It’s definitely a big change. Training with Gintas, Jimi and those guys, I’m no stranger to hard training back home. I guess it was just more the volume of training when I first got here. I got here last summer and did three months out here. The first two weeks, I pushed hard. After I got signed [with the Blackzilians] my body just had to take a couple days to kind of realize what it was I was doing. But I guess in doing what I was doing, which was training so hard, it obviously got me signed and made me part of the team. But like I said, I’m no stranger to hard work. The guys here are fucking just good guys. They welcome you here with open arms. It was a touch that Danny Roberts was here when I first got here as well—a familiar face. So yeah, they welcomed me quite openly and obviously my talent speaks for itself and everybody likes having me in the training room.

Have you developed friendships with any of the fighters there specifically?
Of course. Like I said, Danny was here, though I’m not sure how much longer before. He’d obviously spent some time. But yeah, we’re just a group of like-minded guys. Carrington Banks, Sean Soriano, Michael Johnson, Jason Jackson, they’re all actually good friends of mine now. Des Greene is here. CES MMA champion Andre Soukhamthath, he’s here as well. There’s a good stable of guys and they’re helping me every day. I’m just so grateful that I’m here and they’re happy to have me.

Speaking of coming to the U.S., our wacky election cycle has been pretty hard to miss with everything going on this year. As sort of an outsider looking into this process, what are your thoughts?
It’s funny you ask that. Back at home in the UK, it’s not that they cover it more there; it’s a bit more in my face back home. Over here everything’s a bit simpler. I live three minutes from the gym. I hardly really ever have the TV on. I’m always reading or just chilling out. I haven’t seen much, to be completely honest. I don’t really know what’s actually happening right now. I think the world will be in a bit of an uproar if Donald Trump ends up winning that shit. I’m pretty sure I’d hear about that. I haven’t, so I’m guessing—I’m guessing—that things are as smooth as they can be right now. To be honest I can’t really say much because I haven’t seen too much.

You’re fighting Andrew Whitney in your Titan debut. No doubt you’ve watched tape and know his tendencies. What are you expecting from him and what are you expecting to do in the cage this Saturday?
Well I’m expecting to win. That’s the top priority. I mean I’ve seen him. I’ve studied him a little bit. I don’t watch too-too much tape on guys. You don’t want to build them up. I don’t know where he trains or what he’s doing now. But I’ve seen him. I can’t say I’m not impressed. He knows what he’s doing, but at the same time I’ve been doing what I’m doing and have been training with the best guys in the world. I’m just hoping it comes out my way and I’m doing everything I can to make sure I can do that. I’m not really worried about him, to be honest.

It’s been a while since you last fought. [September 2014.] Was it a contract thing? Was it you trying to get over into the States that put a hold on things? Why did you take so long off?
Basically complications with gyms, coaches and stuff back home. Obviously I had that fight, my last fight with Cage Warriors for the title. I came up short on that. When you lose your coach, your gym and then the fight on top of that all while you’re not really training, it does make you rethink a lot of things and reevaluate a lot of things. I took that time to just observe the game and what it is that I want out of it rather than just jump back into it and act like everything’s OK, you know? It’s better to sit down and really think. It just turned out I saw that Linton Vassell was training over here. We came up on the same show back home. I gave him a shout, packed my bags, came out here and it all worked out for the best. They could write a move about that shit, you know?

What are your goals for the next couple years in the sport?
I’m just trying to go to the top, bro, one fight at a time. It’s funny—as I’ve gotten a little bit older I see that yeah, you’ve got to take it one fight at a time. Back before when I was fighting I put a lot of pressure on myself to win this fight, win by this knockout, win by that knockout and try and just jump straight to the top. But you have to take things one fight a time. I’ve realized that and have put my all into this training camp, I’ve put my all into this fight and it will give me the result I’m looking for to then boost me to the next level . I’m not really looking past Saturday. In my head, Saturday is the day that I die, so I have to give everything.

Cory “Capcom” Tait faces Andrew “The Beast” Whitney this Saturday, April 30, at Titan FC 38: Carl vs. Muhammad. The event will be held at Miccosukee Resort and Gaming in the Miccosukee Tribe of Indians of Florida Event Center and will stream live on UFC Fight Pass. Click HERE for tickets. 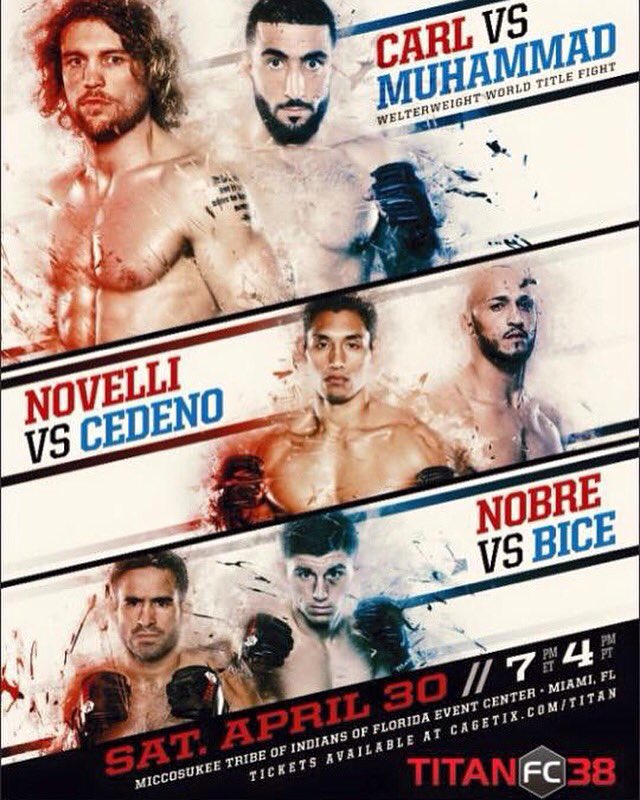 Tyron Woodley: A nightmare to remember