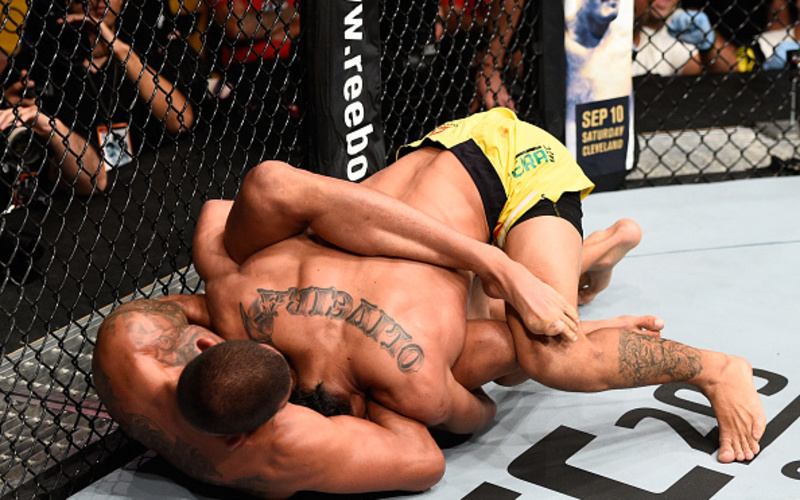 Last Saturday in Vancouver, Anthony Pettis, one of the most spectacular lightweights we have ever seen in the UFC, made his featherweight debut against #6 ranked Charles Oliveira. After watching Pettis in his last three fights get overwhelmed by Rafael Dos Anjos, get out-wrestled by Eddie Alvarez and get outworked by Edson Barboza, we really didn’t know what kind of fighter we would see walk into the cage.

The man who gave us the showtime kick and had made the spectacular look routine on his way to becoming champion of the UFC‘s 155 pound division, suddenly looked hesitant and lacking the confidence to throw the devastating techniques we had seen him end fights with for his whole career.

Anthony Pettis is playing with fire in the featherweight division

Fans, media and maybe even Pettis himself seemed unsure about his cut down to 145 pounds and standing across the cage from him, Oliveira was no walk in the park. As the fight began Pettis did indeed seem slightly hesitant before starting to open up with vicious body kicks one of which would eventually drop Oliveira.

While it was nice to see Pettis display his striking, survive a litany of submission threats from Oliveira and catch him in a wicked guillotine in the third round, the real story of this fight is the conditioning of Pettis as the fight dragged into the later rounds. He seemed to slow down and was starting to get tagged and even gave up a fairly easy takedown to the smaller Oliveira. Pettis was able to lock in that guillotine and take home a win against a very good grappler but as he attempts to climb the ladder at featherweights will the hiccups we saw in this fight come back to bite him?

For a fighter with the star power and the resume that Pettis carries, it doesn’t take many wins for him to find himself fighting top 5 featherweights and when you look at the top dogs in that weight class it’s more than fair to question how the version of Pettis we’ve seen lately combined with a wicked weight cut will be able to survive if Max Holloway, Frankie Edgar, Cub Swanson or Conor McGregor come knocking.

After his win in Vancouver Anthony Pettis jumped up to #6 in the UFC featherweight rankings. With the title tied up in the McGregor show and Jose Aldo holding the interim belt it’s very realistic that we could see Pettis matched up with a top three featherweight sooner than later. With the technical striking that Holloway possesses and the run he’s been on as of late can you really imagine Pettis snagging a win over him or even going the distance for that matter? If the Showtime that fought against Oliveira shows up against Holloway he’s getting taken out. Holloway won’t give Pettis the distance and set up time he needs to set up his kicks and with Pettis’ gas tank looking mighty suspect, Max could very well drag him into deeper waters of the second or third round and get a stoppage.

Despite the technical dismantling of Frankie Edgar that we saw by Aldo at UFC 200, he is still one of the toughest match ups in the UFC for anyone. I’d like to remind everyone that Frankie beat BJ Penn three times which, in my book makes you a borderline superhero.  Combine a super durable cardio machine in Edgar with a depleted Pettis who doesn’t like to be pressured and suddenly door number two looks just as bad as the first scenario against Holloway.

On paper the move down in weight made sense for the former champion after being beaten by Dos Anjos and Alvarez and watching himself get lost in the shuffle with the rise of Tony Ferguson and Khabib Nurmagomedov. Anyone would want to take a step down in weight with those monsters lurking, but he may have dove head first into a whole new shark infested pool filled with slightly smaller sharks who all have superior cardio.

Even the fighter ranked one spot below him, Jeremy Stephens, looks like a bad match up for Pettis. Stephens is as tough an out as there is in the UFC and has nuclear power in his hands. If Pettis can’t land something huge in the first round and a half he could find himself gassed out and in firing range of career changing punches from Stephens. Suddenly what looked like a necessary career move for one of the best lightweights we’ve ever seen is now looks like Pettis could just be playing with fire here.

The UFC isn’t interested in what is best for Anthony Pettis. He is a star, a former champion and someone with a recognizable name that they can use to build up a new young star. If casual fans tune in and see Max Holloway taking out a former king with a name they know, it gives Holloway even more credibility that the UFC can cash in when it comes time to sell a title fight against Aldo or Conor. When it comes down to it they can and will use the equity built up by Pettis in his championship runs against him if they feel they can feed him to an upcoming star.

Anthony Pettis is a tremendous fighter and by no means is he dead in the water at his new weight class, as he proved in his first win but it only gets harder from here. The small windows in striking he left open that led to him getting tagged by Oliveira will make an even bigger difference in fights against far superior strikers. Those little mistakes that he got away with could get him put to sleep against fighters with the power of McGregor, Aldo and Stephens. The cardio issues he showed will make him look like lunch to fighters with a great gas tank and the importance of that only gets larger if he’s put into a five found fight.

Would it surprise me if Pettis made a run at 145 and beat some of these top guys? He’s a world champ and those are only four ounce gloves, so of course anything can happen, but more than likely it would appear we may be about to witness a decline in Anthony Pettis, and it will come to the great benefit of the top of the featherweight division.