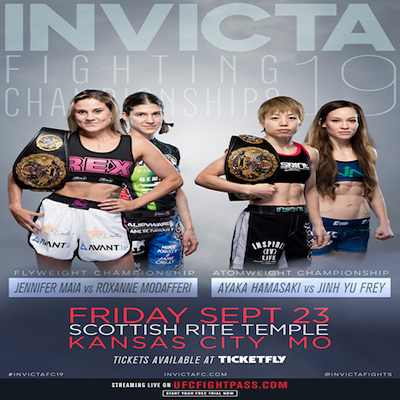 Maia is from Curitiba, Paraná, Brazil, fighting out of Chute Boxe Academy. She began her fighting career with Muay Thai and professional boxing in 2008, and got three wins before transitioning to MMA in 2009. In Invicta, she had mixed success facing Zoila Frausto, Leslie Smith, and DeAnna Bennett before going on a three-fight winning streak in Brazil, continuing back in Invicta with her unanimous decision win against fellow Brazilian Vanessa Porto in March of this year. She went home from this “Fight of the Night” with the flyweight belt in her suitcase, and hopes to return with it to Brazil again in Invicta 19.

After her stint on The Ultimate Fighter season 18 three years ago, ‘The Happy Warrior’ has gone 4-1 in her last five fights with Invicta. The loss was to Porto in a close unanimous decision in April 2015. Roxanne’s last fight was a win over DeAnna Bennett by decision in March, and she’s ready with new tricks for Maia.

“I’ve really evolved as a fighter so much since joining Syndicate MMA in Vegas,” Modafferi commented. “It’s the best team with the best coaches I’ve ever trained with. I’m always learning new things every day, so even if my opponent researches my previous fights, she’ll see a different fighter in the cage this time.”

Japanese Ayaka Hamasaki first captured the title after dropping from strawweight to atomweight to face and defeat Hérica Tibúrcio in Invicta 13. She defended it against in March in a hard-fought arm-bar win against top contender Amber Brown, and will look to do so again against Frey. She trains out of the AACC gym in Omori, Tokyo, and is the three-time Jewels lightweight queen champion title in Japan. She is the number one ranked Atomweight in the world.

“I feel it’s an honor to be ranked as number one,” Ayaka said. “I’ll work hard to protect my place there.”

About Frey and her prediction of the fight, she said, “I can see that her striking is excellent.   If this fight happens to go all five rounds, I’m determined to fight to the end with the same strong will of a title challenger.”

Jinh Yu Frey is on a tear, having defeated Cassie Robb, Liz McCarthy, and Hérica Tibúrcio, earning her the title shot. She began with Muay Thai and boxing before taking up jiu-jitsu and wrestling to make her a well-rounded MMA fighter.

“I’m really excited about getting this title fight,” Frey said. “I’ve worked so hard, and to finally be here is both exciting and surreal.”

She thinks their fight will be a bit of the classic striker versus grappler. “She is obviously going to want to take me down and I want to keep it standing. I think we are both great athletes, so we will see who is better prepared and who wants it more. I have a lot of respect for Ayaka. She has a very tenacious spirit. She is the champ for good reason.”

Also on the card, former title contender for the bantamweight belt Irene Aldana will be facing Faith “The Immortal” Van Duin. Irene challenged Tonya Evinger but was defeated. However, she bounced back with a decisive win against Jessamyn Duke in March of this year. We last saw Faith in Invicta 13 against Christine “Cyborg” Justino. She then picked up a victory in Brace 41 in her home country of New Zealand and is ready to be back in the Invicta cage.

See below for the full Invicta FC 19 card: 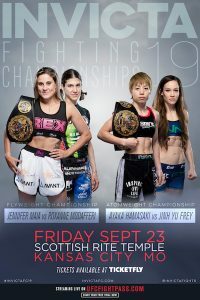