Eddie Alvarez might not get his money fight with Conor McGregor 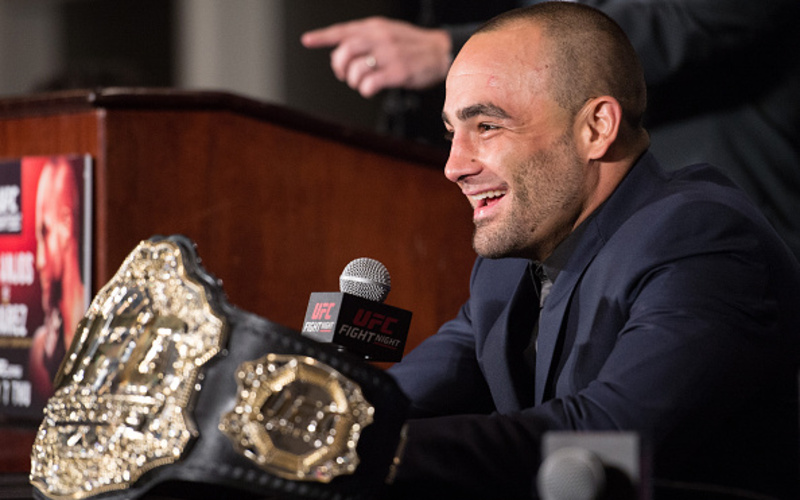 Eddie Alvarez might not get the “money” fight with Conor McGregor that he is lobbying for. UFC President Dana White suggested on Twitter earlier this week that he was working on Khabib Nurmagomedov as the next opponent for Alvarez at UFC 205 in New York, but nothing is officially announced.

UFC Tonight reported that McGregor is unlikely to compete on the New York card because of a leg injury, per White.

McGregor’s camp has denied that the featherweight champion is unavailable to compete.

The report by UFC Tonight also stated that Alvarez did not meet a “deadline” to sign the contract to face Nurmagomedov at UFC 205, so now the UFC is working on setting up that bout for UFC 206 in Toronto on Dec. 10.

Alvarez (28-4) claimed the UFC lightweight title with a first round knockout of Rafael dos Anjos at UFC Fight Night 90 in July.

Alvarez has been clamoring for what he called a “gimmie” fight with McGregor and has been calling out the Irish superstar on social media, while the McGregor camp has expressed mutual interest.  McGregor has constantly stated he wants to become a two-division champion in the UFC and he currently holds the featherweight championship, which he won at UFC 194, with a 13 second knockout of longtime featherweight king, Jose Aldo.

McGregor has yet to defend the featherweight title since that victory in December and White insisted after his win over Nate Diaz at UFC 202, that McGregor would need to either defend that title next or vacate it.

Nurmagomedov (23-0) has only competed once in the last two years due to various injuries, but has finally regained his health and has insisted he should be the next challenger to Alvarez’s title.

The lightweight division is stacked at the moment and former champion dos Anjos will face off with another top contender, Tony Ferguson, in November, with the winner most likely getting a title shot down the line.  While the Russian fighter is undefeated, his inactivity in the last two years has many questioning if he should be granted the next title shot, with so many other fighters more deserving of that opportunity.

McGregor has been generating record breaking pay per view and gate numbers and his appearance on the inaugural New York card would seem to be the perfect fit for such a historic card.

Tyron Woodley will make his first title defense of his welterweight championship against number one contender Stephen Thompson and Donald “Cowboy” Cerrone will face off against Kelvin Gastelum in other bouts confirmed for the card, but no main event has been announced.

Rashad Evans will also make his middleweight debut on the stacked card when he goes up against Tim Kennedy.

With such a strong Irish presence in the New York area, it would seem like the UFC would do everything in their power to have McGregor headline that card, but White’s surprising comments seem to indicate that’s not a given.  McGregor will definitely use that as leverage against the UFC and White’s comments could also just be a negotiating ploy on behalf of the UFC.

The UFC has announced a press conference on Sept. 27 at Madison Square Garden so a big announcement should be expected.