Matchmaking for the UFC 204 Winners & Losers 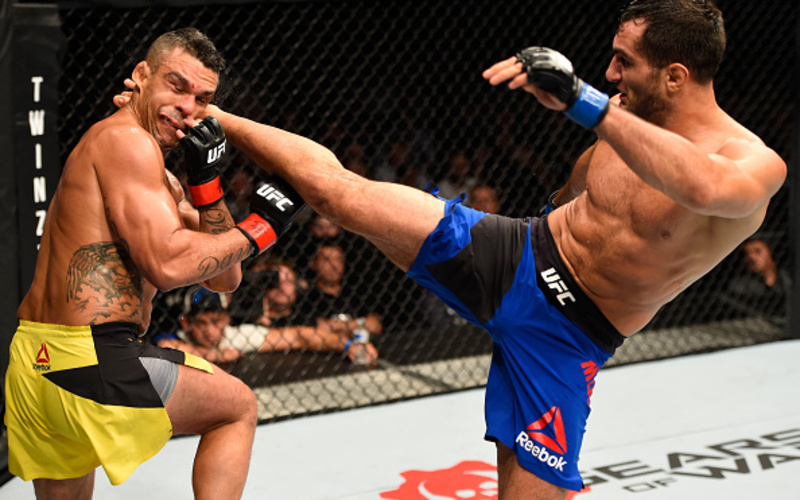 The 11:00 p.m. start time, and 5:00 a.m. finish, didn’t stop European fans from partying. UFC 204 took place Saturday night in Manchester, England. It was headlined by veterans Michael “The Count” Bisping and Dan “Hendo” Henderson competing for the middleweight title. The co-main event featured two other decorated MMA veterans in Gegard “The Dreamcatcher” Mousasi and Vitor “The Phenom” Belfort. After their bouts last night,  it’s time to look into the future of many of the fighters from the card and see what fights to make after UFC 204.

Michael Bisping (30-7)
Last Opponent: Dan Henderson
Who Should be Next: Winner of Luke Rockhold vs. Jacare Souza

Bisping managed to successfully defend the middleweight title, avenging the biggest loss of his career to the 46-year-old Henderson. It surely was not the cleanest of performances, but he managed to get the job done. Bisping now rides a five-fight win streak, having not lost since November of 2014. Henderson was ranked at #13 before the fight; looking inside the top ten, the competition is absolutely stacked.

Rockhold vs. Souza II will be taking place in just over a month, seeing the #1 and #3 middleweights collide for a potential shot at the belt. A win for Rockhold would set up the trilogy between himself and Bisping, or a win for Souza would set up his first chance at the UFC title. This, by no means, does not count out the winner of Chris Weidman vs. Yoel Romero from receiving a shot. I believe it will all come down to USADA testing results and performances they give inside the octagon.

Gegard Mousasi (40-6-2)
Last Opponent: Vitor Belfort
Who Should be Next: Winner of Derek Brunson vs. Robert Whittaker

Mousasi showed great composure against Vitor Belfort, scoring the second round TKO and earning one of the biggest wins of his career. The only slip in his last six fights came against Uriah Hall, suffering the only technical knockout loss of his career. His other notable wins since January of 2015 include victories over Henderson, Costas Philippou, Thales Leites, and Thiago Santos. I believe Mousasi is just a slight step behind the names of Rockhold, Souza, Weidman, and Romero at the moment. Two other high-ranked middleweights will be competing against each other next month in Melbourne, Derek Brunson and Robert Whittaker. These two have also earned respected win streaks in the division. Whoever comes out on top will be in the right spot for a possible fight with Mousasi.

Jimi Manuwa (15-2)
Last Opponent: Ovince St. Preux
Who Should be Next: Glover Teixeira

Jimi Manuwa earned a brutal second-round knockout win over Ovince St. Preux Saturday night. Many counted Manuwa out, having not competed in 13 months and previously suffering two knockout losses (and his only losses) to notables Anthony Johnson and Alexander Gustafsson. However, he surprised many by finishing St. Preux earning the most impressive victory of his career. Manuwa sits at 5-2 in the UFC and definitely deserves another high-level opponent. Glover Teixeira caught my eye; both now have stoppage victories over Ovince St. Preux and stoppage losses to title contender Anthony Johnson. With Teixeira coming off a loss and Manuwa coming off this win, a striker vs. striker match-up between the two would surely be a fun one for the fans.

Stefan Struve (31-8)
Last Opponent: Daniel Omielanczuk
Who Should be Next: Andrei Arlovski

Stefan “Skyscraper” Struve utilized his 84.5 inch reach advantage well against the smaller Daniel Omielanczuk, securing a second round D’arce choke. Struve’s finish moves him to having the second most submissions in the history of the UFC’s heavyweight division at five, behind only Frank Mir who holds eight. Struve has now won three of his last four fights, only slipping a unanimous decision loss to Jared Rosholt in November of 2015. The first opponent that came to mind was Andrei Arlovski; I’d imagine the UFC would like to keep him around for a while longer if he doesn’t chose retirement. Arlovski is a notable name to the casual viewer and is deserving of notable opponents in return. The winner of, what could be, Struve and Arlovski would be a very important fight in the heavyweight division.

Mirsad Bektic (11-0)
Last Opponent: Russell Doane
Who Should be Next: Dennis Bermudez

Mirsad Bektic showed a well-rounded game plan going up against the short-notice replacement Russell Doane. Bektic still remains undefeated at 11-0 with five of his wins coming by knockout and three by submission, just at the age of 25. This man definitely deserves a top 10 or 15 opponent, and I would like to see a match-up between himself and Dennis Bermudez. Bermudez currently rides a two-fight win streak defeating both Tatsuya Kawajiri and Rony Jason in 2016. This is a winnable fight for Bektic, but also would be the toughest and most important test of his career (if the fight were to take place).

Dan Henderson (32-15)
Last Opponent: Michael Bisping
Who Should be Next: Retirement

The 46-year-old Henderson has done a tremendous amount for this sport. Despite not going on top, he gave it his all against Bisping in the final fight of his mixed martial arts career. Henderson racked up four “Fight of the Night,” one “Knockout of the Night,” and two “Performance of the Night” inside the UFC. He was the Pride welterweight and middleweight Champion, along with being the Strikeforce light heavyweight Champion. He won the UFC 17 middleweight tournament in 1998 and the Rings’ King of Kings 32-man tournament winner in 1999. Henderson holds numerous awards in Greco-Roman wrestling, being a member of the 1996 United States Olympic team. He holds MMA victories over many greats including Fedor Emelianenko, “Shogun” Rua, Wanderlei Silva, Belfort, and Minotauro Nogueira. Saying goodbye to someone like Henderson is tough, but and end must come to every great legend. Thank you for everything, Dan.

Vitor Belfort (25-12)
Last Opponent: Gegard Mousasi
Who Should be Next: Retirement

“Wes, are you serious?” Yes, I thought I would discuss the possible retirement of Belfort. His career has taken a downfall in the past year and a half, losing three of his last four being finished by TKO each time. He would walk away with five “Knockout of the Night” bonuses and one “Performance of the Night” bonus, currently holding the record with the most knockouts in UFC history (12). 7 of Belfort’s 18 knockout victories have come under 60 seconds. Belfort was the former UFC light heavyweight champion and won the UFC 12 heavyweight tournament in 1997. He holds many notable victories including Wanderlei Silva, Randy Couture, Rich Franklin, Henderson (x2), and Bisping. If this is the end, we thank you for everything, Vitor.

Ovince St. Preux (19-9)
Last Opponent: Jimi Manuwa
Who Should be Next: Ilir Latifi

The conditioning played quite a toll on Ovince St. Preux, drastically slowing down in the second with constant pressure from his challenger Manuwa. Now with three setbacks in his last four fights, St. Preux is definitely in need of an impressive win. I would love to see St. Preux face off against Ilir Latifi. This is definitely a personal preference, a light heavyweight fight that I have wanted to occur for a while. Both are coming off two vicious knockout losses to their own respected opponents. Both have heavy hands that could end the fight at any second.

Daniel Omielanczuk (19-6-1, 1 NC)
Last Opponent: Stefan Struve
Who Should be Next: Gabriel Gonzaga

Daniel Omielanczuk took this fight on just about a month’s notice, filling in for Ruslan Magomedov. At no point did look as though Omielanczuk was having success against Struve, and I believe there are still parts of his game that needs improvement. He was on a three-fight win streak before this fight and now moves to 4-3 in the UFC. Gabriel Gonzaga has fallen off the radar in recent years and is still hanging around in the

Russell Doane (14-7)
Last Opponent: Mirsad Bektic
Who Should be Next: Michinori Tanaka

I am being very considerate here. Russell Doane has now lost his last four fights in a row to Iuri Alcantara, Jerrod Sanders, Pedro Munhoz, and now Bektic. His last victory came over Marcus Brimage in July of 2014; the only reason I am providing him a fight suggestion is because he did take this fight on short notice against Bektic. I thought of Michinori Tanaka; he is open for a fight and is ranked fairly lower in the bantamweight division. I would give Doane one more chance to compete in the UFC. If he loses, that’s it.

Other fight suggestions for the remaining victorious and defeated from UFC 204: