Matchmaking for the UFC on FOX 22 Winners & Losers 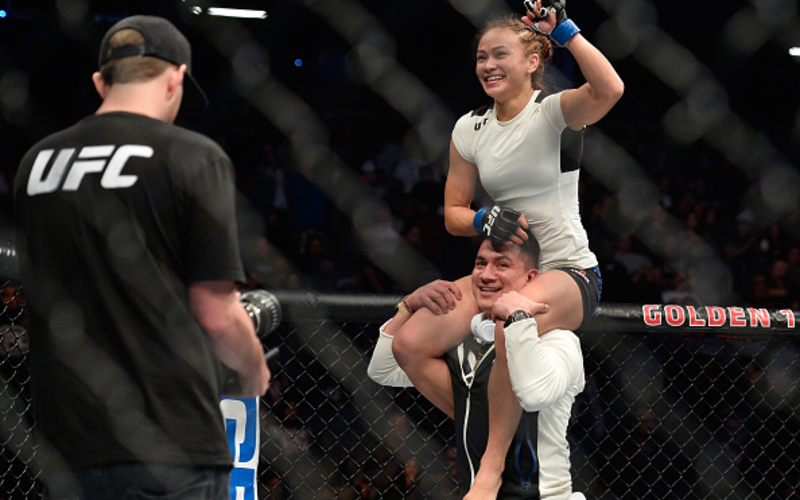 The UFC made its fourth promotional trip on December 17 to Sacramento, California for UFC on FOX 22. In the strawweight-featured main event, Michelle Waterson came out victorious over Paige VanZant by submitting the 22 year old with a rear-naked choke in the first round. The co-main event saw young up-and-comers Mickey Gall and Sage Northcutt battle in the welterweight division. Gall’s slick grappling skills led to a submission victory in his favor, keeping his professional unbeaten streak alive. UFC on FOX 22 also featured the final octagon appearance of “The California Kid” Urijah Faber, scoring a win over Brad Pickett in front of his hometown crowd. The fourth and final fight making up the Fox main card was between welterweight strikers Alan Jouban and Mike Perry. Jouban managed to outwork Perry for the fifteen minutes, en route to a unanimous decision victory. Following Saturday night’s event, it’s that time again to provide fights to make after UFC on Fox 22.

Matchmaking for the UFC on FOX 22 Winners & Losers

Michelle Waterson (14-4)
Last opponent: Paige VanZant
Who should be next: Jessica Andrade (15-5)

Following a 17 month layoff after suffering a knee injury, Michelle Waterson returned to make quick work of Paige VanZant, earning a first-round submission win. The former Invicta FC Atomweight Champion has only suffered one loss since 2010 in nine fights; seven of the eight wins have come by finish. Waterson is undeniably one of the best strawweights on the UFC roster and with this win, has moved herself one step closer to receiving a shot at the title. Former bantamweight Jessica Andrade has looked fantastic since making the move to 115 pounds, earning two stoppage wins over Jessica Penne and Joanne Calderwood in 2016. Andrade was briefly linked to fight two different opponents on December 30th’s UFC 207; however, neither fight managed to fall through, and the plan to keep her on the card remains undecided. Waterson vs. Andrade should be the fight to make next; however, I do not believe it should take place at this event. Give Waterson time to prepare with a full-fight camp, and let her face Andrade at possibly UFC 208.

Mickey Gall (4-0)
Last opponent: Sage Northcutt
Who should be next: Marco Polo Reyes (7-3)

One of the “Looking for a Fight” stars had to take the loss, and it wasn’t Mickey Gall. His grappling played out the way as some expected, submitting Sage Northcutt by rear-naked choke in the second round. Gall sits undefeated as a professional finishing all four fights by submission. During his post-fight interview, Gall suggested that his next fight might be at 155 pounds. He also proceeded to call out Dan Hardy, who has been hinting at a UFC return for the past two years; however, he has yet to do so. The more realistic possibility, of course, would be for Gall to plan the move from welterweight. A possible lightweight opponent could be Marco Polo Reyes, who now rides a three-fight UFC win streak with two post-fight bonuses. This is a winnable fight for Gall, but also one to test his skills against Reyes who is climbing his way through the division.

Urijah Faber (34-10)
Last opponent: Brad Pickett
Who should be next: Retirement

Finishing your professional mixed martial arts career with a win in front of your hometown is one of the best ways to end a legacy. Urijah Faber did just that, earning a dominate unanimous decision victory over Brad Pickett in his final octagon appearance. His career started all the way back in November of 2003 and within three years, Faber won the Gladiator Challenge Bantamweight Championship, King of the Cage Bantamweight Championship, and the World Extreme Cagefighting (WEC) Featherweight Championship. He would make the move full-time to WEC, compiling five title defenses and a 21-1 record before losing the belt in November of 2008 to Mike Brown.

During his WEC reign, he formed a notable rivalry with Dominick Cruz, whom Faber defeated by guillotine at their first outing in March of 2007. Both would see an official drop from featherweight to bantamweight, and Cruz would later earn the WEC Bantamweight Championship. With the WEC’s merge with the UFC in 2010, Cruz was made the inaugural champion of the division. The two would meet at UFC 132 in July of 2011, seeing Faber lose a “Fight of the Night” unanimous decision to his foe and unable to capture the title.

Two fights later, he would lose another decision to Renan Barao for the interim UFC Bantamweight Championship. Faber would have a successful year in 2013, earning four straight victories over top-fifteen ranked opponents at the time. The wins would give Faber another chance at Barao in February of 2014, who was promoted to the champion following Cruz’s streak of injuries. He would lose again by first round TKO, and walk away once more without the UFC belt.

Following his second loss to Barao, the remainder of 2014 and 2015 saw Faber earning three victories and one more loss to Frankie Edgar. He was given one more chance for the bantamweight title at UFC 199 in June of 2016, the belt having been recaptured by Dominick Cruz. The fight saw Cruz earning a decisive unanimous decision victory, closing out the trilogy between both veterans. Faber would lose his next fight to Jimmie Rivera in September; however, he would rack up this final fight from Saturday night on a high note by defeating Pickett.

Thank you for an unbelievable career, Urijah Faber, and we wish you the best of luck in your future.

Professional model Alan Jouban didn’t let the trash talk (or punches) of Mike Perry get the best of him by earning a unanimous decision victory. The stand-up talent of Jouban continues to improve with each fight, who now rides a three-fight win streak in 2016. A new addition to the welterweight division with impressive striking is Norwegian Emil Meek, who recently scored a decision victory in his UFC debut over veteran Jordan Mein. Meek’s name had popped on the radar before Mein, having knocked out former UFC fighter Rousimar Palhares in 45 seconds. Both Jouban and Meek are making impressive strides in their careers, and a face-off between the two would seal a definite position in the Top-15 rankings.

Paige VanZant (7-3)
Last opponent: Michelle Waterson
Who should be next: Maryna Moroz (8-1)

Paige VanZant suffered the second submission loss of here career to Michelle Waterson, and the third loss of her ten professional fights. VanZant got back in the win column in her previous outing, scoring a switch kick knockout over Bec Rawlings in August. VanZant is only 22 years old, and as people have said numerous times before: there is no need to rush. She still resides in the Top-15 of her division and is still a threat for any opponent matched up against. Maryna Moroz is another young strawweight who has shown a fairly well-rounded game. Moroz has won her last two fights with her only career loss coming to Valerie Letourneau. I believe the skill-set of both Moroz and VanZant are fairly even, so this could make for an interesting (and important) fight in the division.

Sage Northcutt (8-2)
Last opponent: Mickey Gall
Who should be next: Brian Camozzi (7-3)

Sage Northcutt showed some impressive stand-up; however, the grappling of Mickey Gall could not be matched, as he tapped from a rear-naked choke in the second round. This is his second loss of 2016, having defeated Enrique Marin between the two at UFC 200. Northcutt is still a marketable name and a fan favorite to many who watch the sport; however, he has areas to work on. The 22 year old still has found some success already in his UFC career, and his development will improve with more experience. A recent addition to the welterweights who matches Northcutt in experience comes with Brian Camozzi, who dropped a loss in his UFC debut to Randy Brown. Camozzi came over from the Resurrection Fighting Alliance after winning three straight fights in the promotion by finish. A bout between he and Northcutt would be a critical test for both to see where they stand among the younger competition.

After getting dropped in the first round, Brad Pickett did not have any success throughout the fifteen minutes against Urijah Faber. Pickett has lost five of his last six fights, his only win a controversial one over Francisco Rivera in February. The UFC will be heading to the O2 Arena in London, England for UFC Fight Night 108 on March 18th in 2017; conveniently, “One Punch” is from London. Talks about Pickett retiring have been discussed, and having a final fight in your hometown would be worth it. A clash between he and veteran Kid Yamamoto would be a really interesting one to watch for this card. Unfortunately, Yamamoto has faced a string of injuries that have kept him out of mixed martial arts competition in recent years. His lone octagon appearance since 2012 came in February of last year, a fight with Roman Salazar that ended in a No Contest. A perfect swan song ending would be for Pickett to go out on top in front of his home crowd, just like Urijah Faber did to him.

Mike Perry struggled to find a rhythm against Alan Jouban, getting out-struck for most of the fight and dropping a unanimous decision. This was the first loss of his professional career, having won all nine of his previous fights by knockout. His UFC record is 2-1, but he still is a powerful threat for anyone in the welterweight division. Another heavy-handed striker who made his UFC debut in August was Sabah Homasi. He stepped in on two weeks notice to face the dangerous Tim Means; despite being finished in the second round, Homasi showed he rightfully belongs in the UFC. A fight between he and Mike Perry could be an absolute war and a must see for the MMA community.

Other fights to make after UFC on FOX 22: