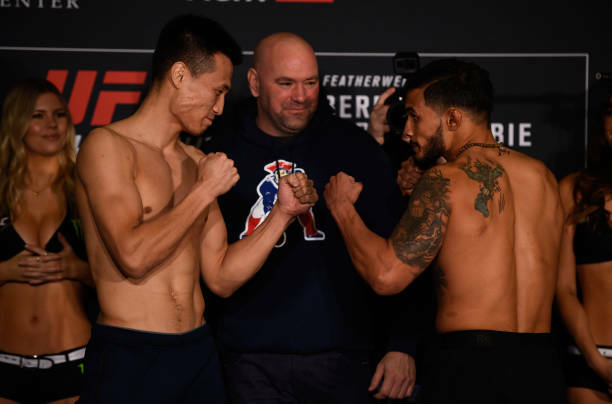 The UFC kicks-off February with a Fight Night card in which many MMA fans are enthusiastic about. UFC Fight Night 104: Bermudez vs. Jung takes place in Houston, Texas – the home of this years Super Bowl.

The much anticipated return of the Korean Zombie, Chan Sung Jung, is finally set to take place Saturday night against #9 ranked featherweight Dennis Bermudez. Fans have been eager to see what the Korean Zombie can still do after taking a mandatory three years off from MMA to serve in the army.

Also fighting on the main card is Alexa Grosso, who will take on Felice Herrig. Abel Trujillo looks to defeat James Vick. Ovince Saint Preux will look to rebound from two straight losses against Volkan Oezdemir. Anthony Hamilton will take on Marcel Fortuna, and Jessica Andrade will have her hands full with Angela Hill.

Chan Sung Jung def. Dennis Bermudez via TKO (punches) at 2:49 of Round 1

James Vick def. Abel Trujillo at :49 of Round 3

Marcel Fortuna def. Anthony Hamilton via KO (punch) at 3:10 of Round 1

Chas Skelly def. Chris Gruetzemacher via submission (rear-naked choke) at 2:01 of Round 2

Khail Rountree def. Daniel Jolly via KO (knees) at :51 of Round 1