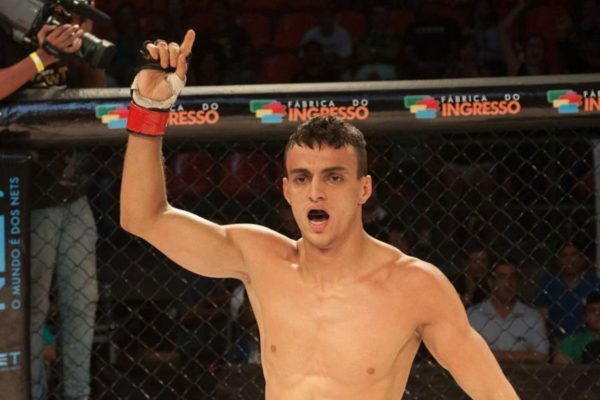 The UFC hit the ground running in February with a solid card last weekend. It featured the return of Chang Sung Jung, also known as The Korean Zombie, and the brawler did not disappoint.

We also saw another disappointing performance from Ovince Saint Preux, which dropped his UFC light heavyweight ranking to #9. Whether he can bounce back from his third straight loss remains to be seen, but the 33-year old is 1-4 in his last five fights and could be on the hot seat moving forward.

For the rest of February, the re are two UFC cards on the docket. UFC 208 will feature the inaugural UFC Women’s Featherweight Championship match between Holly Holm and Germaine de Randamie this evening, while Derrick “The Black Beast” Lewis  will make his return against Travis Browne in Halifax next Sunday.

Here is a look at the up and coming UFC prospects who have, and will, hit the Octagon in February.

Adriano Martins put a stop to Islam Makhachev‘s rise, but the 25-year old Russian came back strong against Chris Wade. He displayed better striking, and utilized his wrestling to come away with the unanimous decision win. Tonight, Makhachev will have an opportunity to prove himself against MMA veteran Nik Lentz. If he can make it two in a row, Makhachev could have a big year in 2017.

Jarred Brooks should have made his UFC debut tonight against Ian McCall. However, after falling sick, McCall has been removed from his UFC 208 bout. Taking to Twitter, Brooks gave his opinion regarding McCall’s ‘illness’.

@LynchOnSports. I scared the dude into sickness he was sick with fear

With McCall’s bad luck continuing, one can only hope the UFC finds Brooks another opponent soon. Hopefully it will be in the coming months after a reportedly strong training camp.

Gavin Tucker held the Extreme Cage Combat Featherweight Title before making the jump to the UFC. He will be taking on Sam Sicilia, which should be his toughest test yet. The 30-year old Canadian brings a nice blend of striking and grappling, but has not faced top competition. This will be a great fight for him to test the UFC waters.

The brother of celebrated Tristar coach Firas Zahabi, Aiemann Zahabi will be making his UFC debut against Reginaldo Vieira on February 19. He fought primarily in Canadian promotions before getting the call, but has three submission and three TKO victories in the first round. Not to mention, he has one of the best camps on the planet behind him at Tristar. If there is any reason to believe in the 29-year old, it is the simple fact that he trains with monsters like Rory MacDonald and Georges St. Pierre.

Making a name for himself in Australia and the South Pacific, Alexander Volkanovski has plenty of fights under his belt, but made his way to the UFC for better competition. He took on Yusuke Kasuya last November and won via second round TKO. Kasuya only landed four strikes and a takedown, while Volkanovski landed 50 strikes and three takedowns. He will take on Michel Quinones next weekend, which should dictate his UFC future moving forward.

Deemed unfit to fight due to medical reasons, Justin Willis was pulled from the UFC 208 card, and subsequently postponed Marcin Tybura‘s next bout. In a completely stagnant division, both fighters would have had the chance to take a big leap up the UFC heavyweight ladder. In what could have been an exciting bout, hopefully Willis and Tybura will hit the Octagon later this year.

Jack Marshman has plenty of fights under his belt at just 27 years old. He can take damage, but dish it out just as well. In his UFC debut against Magnus Cedenblad, Marshman showed strong striking skills but even better versatility. He was able to score the second round TKO, and will take on Thiago Santos next weekend. Marshman should have a good chance at coming away with a win, if he shows similar abilities in his second UFC fight.

Despite the poor record, the TUF semi-finalist Khalil Roundtree Jr. has improved since the loss to Andrew Sanchez. He lost his next fight to Tyson Pedro via first round submission, but looked great against Daniel Jolly. Jolly failed to land a single punch, while Roundtree Jr. was able to score the first round TKO with just three punches. If he continues to improve in all facets, Roundtree Jr. has the athleticism to be a deadly fighter in the UFC light heavyweight division.

In Rick Glenn‘s defense, his UFC debut was against MMA veteran Evan Dunham, and it was a very tough bout for the UFC newcomer. He still earned a Fight of the Night, but lost the bout via unanimous decision. Prior to the UFC, Glenn compiled a great record, and even holds a submission win over Johnny Case, one of the most notable prospects in the UFC. He held the World Series of Fighting Lightweight Title, and has plenty of experience for his age. He will look to redeem himself against Phillipe Nover tonight in Brooklyn.

Marcel Fortuna was fairly unknown before his fight with Anthony Hamilton. He fought primarily for the Dragon House promotion, and his only career loss was against Ultimate Fighter alumni Jesse Taylor. He was considered a grappling practitioner prior to his UFC debut, but his striking skills are clearly improving. He defeated Hamilton with a great first round TKO, which earned him a Performance of the Night bonus. Expect him to see another big name opponent in his next fight.

Ricardo Ramos came away with a controversial win over Michinori Tanaka last weekend, but the Brazilian looked confident and fluid nonetheless. He showed tremendous poise for 21-year old newcomer, and lived up to the hype after appearing on “Dana White: Lookin’ for a Fight“. He is a very promising fighter with impressive versatility for his age, and could be one to watch with another UFC win.

There is plenty of potential in Volkan Oezdemir. He has only lost via submission while under the Bellator banner, but has come back strong with three-straight wins. He made a name for himself last weekend after defeating Ovince St. Preux in a split decision. It was a good striking performance, and certainly opened the door to top competition in his next bout.

Fighting out of Coconut Creek with American Top Team, Oezdemir has a great team behind him, and has shown plenty of versatility at just 27 years old. It will be intriguing to see who the UFC gives him next, but he should make a big splash in the UFC light heavyweight division this year.

Cannonier held two heavyweight titles in Alaska, and will be taking on his toughest matchup yet in Glover Teixeira. He showed good striking skills, and even better poise against Cutelaba. He was in tough positions, but found ways to recover and get to his feet. If he pulls off another impressive win, the 2-0 light heavyweight fighter will be knocking on the door of a wide open UFC division.

Curtis Blaydes has been nothing short of impressive in his last three fights. He fought valiantly against Francis Ngannou in his UFC debut, but lost the fight via doctor stoppage in the second round. Since then, Blaydes has gone 2-0 with a Performance of the Night against Cody East, and a round 2 TKO against Adam Milstead last weekend.

The UFC is praying for more heavyweight fighters, and Blaydes could be the one to watch. The division is completely open, and the 25-year old should see a ranked opponent in his next fight. Look for ‘Razor’ Blaydes to have a big year in 2017.

Taking on Roan Carneiro in his UFC return, Ryan LaFlare is well-bred MMA fighter, but has not fought since December 2015. After losing to just Demian Maia, LaFlare came back with a unanimous decision win against Mike Pierce. After suffering multiple injuries, LaFlare will make his long-awaited return in front of his hometown crowd in New York.

LaFlare is an elite wrestler, but has developed his overall MMA game. He is a grappler by trade, but is always ready to bang. This fight should be exciting, and the heavy-favorite LaFlare should be a fighter to watch as he gets back on track at 33 years old.

Randy Brown is arguably not a prospect, but his loss to Michael Graves brought everyone back to earth, especially “Rudeboy” Brown. Now riding a two-fight win streak, Brown is looking to enter his fifth UFC fight against Belal Muhammad with all the confidence in the world. Muhammad is 1-2 in the UFC, and is hardly a high-end contender at the moment. If Brown were to lose this bout, his status as a true welterweight prospect will remain in question.

Looking at his last fight against Brian Camozzi, Brown came out very confident and patient. He picked his shots, and landed the second round TKO. If he comes out with the same confidence, there is a good chance Brown will leave the prospect realm forever. For now, as we continue to watch his skills grow, everyone is waiting for the Jamaican-native to enter the top 15 UFC welterweight ranking.