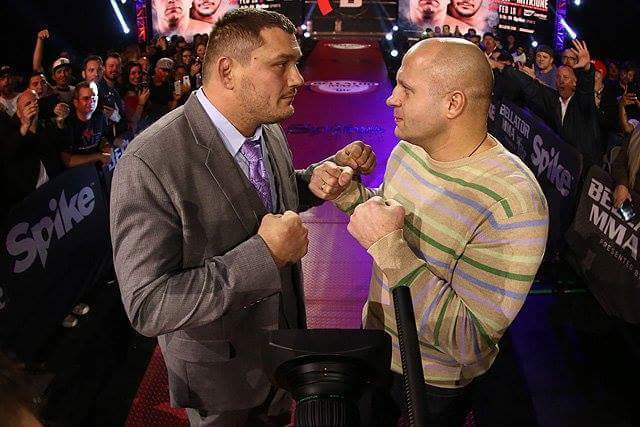 After a disappointing UFC 208 pay-per-view last night, it’s time to look ahead to next weekend.

Overall, it may not be the most stacked card ever put together, but it sure is an exciting one, starting all the way at the bottom of the card. The prelims feature prospects like Anthony Do, Paradise Vaovasa, John Cardenas, and Don Muhammad. The undercard also features names fans have probably heard of like James Terry and Carlos Eduardo Rocha. But the most intriguing fight on the undercard for many sees Team Fedor’s Anatoly Tokov bring his 24-3 record into the Bellator cage for the first time to take on 13-4-1 ‘Kiko’ France. Tokov enters the bout as one of the best middleweights in a talent-filled Russia.

Bellator 172 is next weekend and we should all be excited

The main card is really what people should be excited for, though. The main event features the return of heavyweight MMA legend Fedor Emelianenko who looks to make his Bellator debut against UFC-veteran Matt Mitrione.

Former king of PRIDE FC, Fedor returned from a three-year retirement in late 2015 under the RIZIN FF banner making quick work of Jaideep Singh. Afterward, in June of last year, Fedor took on Fabio Maldonado under the EFN banner, coming out on top after a 15-minute contest that saw Emelianenko in trouble more than once. Now, with tons of questions on people’s minds about where “The Last Emperor” might be in his career, he is set to take on one of the most athletic and dangerous heavyweights in the world; Matt Mitrione.

Mitrione, unlike most others, made his MMA debut in the UFC. After entering the TUF 10 house, Mitrione made his MMA debut during the Finale in December of 2009, knocking out castmate Marcus Jones. He then fought exclusively for the promotion until 2016, amassing a 9-4 record in the process. He then signed with Bellator and debuted five months following his UFC release. Since joining the promotion he has gone a perfect 2-0, stopping Carl Seumanutafa and Oli Thompson. Now the former NFL’er is gearing up for the biggest fight of his life against the greatest heavyweight this sport has ever seen.

American Kickboxing Academy’s Josh Thomson has faced a who’s who of lightweights. Whether it be a Bellator cage, a UFC cage, a Strikeforce cage, or a PRIDE ring, Thomson has seen it all. After being released from the UFC in July of 2015, Thomson made his Bellator debut in September of that same year on their big ‘Dynamite’ show, beating Mike Bronzoulis by way of unanimous decision. He then went on to stop 10-1 Pablo Villaseca just 3 months later. After a highly anticipated fight between Thomson and Michael Chandler fell through for May of 2016 due to a Thomson injury, he was not able to be seen compete at all in 2016. But he hopes to have a far more active 2017 if he can get by “Pitbull” early on.

Being one of the few Bellator MMA mainstays, Patricky “Pitbull” has fought with the promotion exclusively since Bellator 36 in 2011. After going a perfect 2-0 in the first half of 2016, including a brutal KOTY contender vs. Ryan Couture and a unanimous decision win over UFC-vet Edimilson Souza, Freire was given a lightweight title fight against Michael Chandler. After suffering a brutal knockout at the hands of Chandler in June of 2016, “Pitbull” took some time off and hopes to make the climb back towards the title, starting with Josh Thomson.

With the title being vacant right now, the heavyweight division is wide open. Every fight matters and every fighter hopes to make an impression that warrants the promotion to put them in that vacant title fight sometime in the near future. Cheick Kongo and Oli “The Spartan” Thompson know this, and both men will be looking to out-do the fighters in the evening’s main event.

After spending seven years in the UFC and beating guys like Matt Mitrione and Mirko Cro Cop, Kongo was released from the UFC in 2013 following a loss to Roy Nelson. In that same year, he signed with Bellator MMA and put together two wins in a row over Mark Godbeer and Peter Graham. He was then given a title shot against then-champion Vitaly Minakov but would lose by decision. He then put together another two-fight win streak, stopping Eric Smith and Lavar Johnson, all before losing to a natural light heavyweight in the form of “King Mo”. Since that loss in 2015, Kongo has won three straight, including a win against former champion Alexander Volkov, and most recently besting Tony Johnson Jr. These three wins straight are the best he’s done in the Bellator cage, and the best streak he has been on since 2008-2009.

Englands Oli Thompson entered the Bellator cage last year riding a 5-fight win streak, including a win over current KSW champion Fernando Rodrigues Jr. He was lucky enough to make his debut in the UK. Unfortunately for him, his opponent was a fired up Matt Mitrione. The two brawled it out much to the delight of the crowd before Mitrione won by TKO in round two. Thompson hopes to rebound successfully against veteran heavyweight Cheick Kongo and has reportedly already booked another fight for May of this year against Mariusz Pudzianowski, but that has yet to be confirmed.

After months of anticipation, TUF 1 castmate and former UFC title challenger Josh Koscheck will return to action and make his Bellator MMA debut against 6’2 Mauricio Alonso in a fight that was announced just two weeks prior to the event to the surprise of many.

Formerly a member of AKA, but now fighting out of Dethrone Base Camp: Fresno, Koscheck will return to the cage having not fought since March of 2015, and having not won since February of 2012. After injuries pulled him out of fights against Matt Secor and Paul Daley in the Bellator cage, it looks like this time we’ll actually see Koscheck fight. He was choked out by Erick Silva in his last outing, which was less than one month after he was brutally choked out by Jake Ellenberger. Hopefully, everything that has been setting him back these past few years has been handled so we see the Koscheck of old next Saturday.

36-year-old Mauricio Alonso trains out of Fairtex Gym, and, despite being a relative unknown, is quite a threat anywhere the fight may take place.  He is primarily a striker but has quite a decent ground game if the fight does end up there. Alonso has won two straight by decision over Mike Persons and Bellator, GLORY veteran Justin Baesman in August of 2016. This is easily the biggest fight of Alonso’s career and it would be absolutely monumental if he could pick up a win over Koscheck.

The whole card is full of great match-ups that are must-watch for any fan of MMA, but that main card is very exciting on paper. Lots of big names, lots of great fighters, lots of intriguing stories, and tons of potential for Bellator 172 to be an event we all remember.

Fedor makes his Bellator MMA debut as he takes on that “legit” heavyweight we’ve all been waiting to see him take on since his return from retirement. A massive opportunity for Matt Mitrione. An incredible lightweight fight that could determine who challenges for the belt next. An important heavyweight contest. The debut of Josh Koscheck. The debut of Anatoly Tokov.

Bellator 172 takes place on February 18 at the SAP Center in San Jose, California.

What’s not to love? See you guys next Saturday!