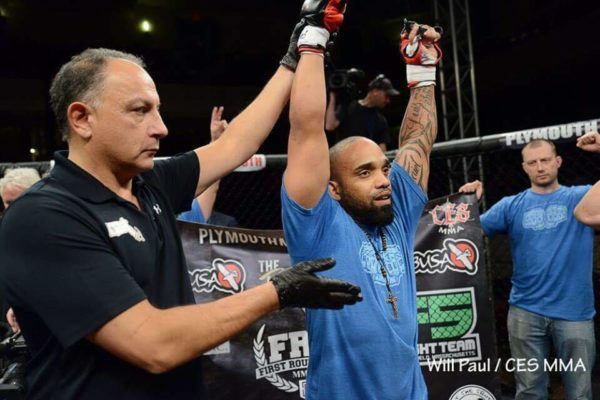 Will “The Brown Bomber” Santiago (7-3) will meet CES welterweight champion Chris Curtis in the cage for the belt on March 31.

For Santiago, a successful title challenge is just the next step towards his goal of reaching the UFC. That may seem like a lot of pressure, but it sounds little once you know what Santiago has already experienced in his life outside of competition.

Santiago told MMASucka that a victory over Curtis would “be a celebration of hard work and a lot of sacrifices that I’ve made and are continuing to make.”

Those sacrifices have never come easy. Santiago came from a rough childhood and teenage years where his parents were not as present as he would’ve liked, his older brothers were not the greatest role models, and he spent over a decade in prison for a crime that he preferred not to disclose.

He emerged from that experience with an inspiring mission: stop the violence and hate, help the homeless, and turn his life around. After being released from prison in 2009 at the age of 26, Santiago said that he is a different person from when he went there in 1998 at the age of 15.

“There’s a lot of people out there who get out of prison and they can’t do nothing,” the now 34-year-old said. “No one wants to give them a chance. I spent the last five years of my sentence working on how to change my life. I did all these types of things to better myself before I got out. I figured I could use MMA to get my message out.”

The fighter said that if he could give a couple of crucial lessons to people whose lives he touches, it would be to not play the victim and to confide in others.

“The more you keep things to yourself, you’re not going to go nowhere,” he said. “That was my problem. It got me to make some terrible decisions that I will regret for the rest of my life and that I can’t forgive myself for. Just love yourself and stay true to who you are as a person. Reach out to someone.”

“People started to help me out when they saw I was turning my life around.”

Santiago still needed to find a way to work and make money. After he was released from jail, he asked himself, “What am I good at?” The answer turned out to be fighting.

“I used to fight all the time in the street and I’ve always trained boxing,” he said. “I saw Kimbo Slice fight in Elite XC, and I was like, ‘I can do this.’”

The fighter believed that he was too old to get into the sport of boxing when he was ready to kick off the new chapter of his life.

“I tried MMA and fell in love with it,” Santiago said. “I’ve been doing it ever since.”

While a boxer at heart, “The Brown Bomber” has developed an affinity for all the other types of mixed martial arts disciplines, especially wrestling and Brazilian jiu-jitsu.

Santiago started off strong as an amateur in his newfound career path, notching two victories in just over six months. After that, he made the leap to professional competition.

When his record hit 4-3, Santiago was given a shot at the Cage Titans vacant welterweight title against Sean Lally. Santiago used his jiu-jitsu to pick up not only a first round submission, but also his first professional mixed martial arts championship belt.

The victory made Santiago feel he truly belonged in MMA, and he decided it was time to make a necessary and quite literal move in order to make the most out of his career. He moved from Lawrence, MA. to Albuquerque, NM to train at one of the premier MMA gyms on Earth.

“I spoke to my coach [Rick Alford] and got his blessing to reach out to a few gyms,” he said. “Jackson Wink MMA got back to me within 24 hours. I was shocked and surprised, but I packed my bags and left everything behind. It was the best decision I’ve ever made.”

One of the many sacrifices Santiago has made was leaving his ill mother behind in Massachusetts, but he’s hoping that his decision to do so will pay dividends. The more success he has in MMA, the more he can do to support his mother. He felt his best shot at that was training at Jackson Wink MMA.

“I was originally supposed to stay [in New Mexico] for six months, but I fell in love with it,” Santiago said. “Before you know it, it was over a year. I’ve been out here ever since.”

The up-and-comer has worked with many of the sport’s best at Jackson Wink MMA. He’s worked with names like Jon Jones, Holly Holm, Donald Cerrone, Michelle Waterson, Diego Sanchez, Alistair Overeem and Chris Barnett. Santiago said that his biggest partner during his current camp has been former UFC flyweight title challenger, John Dodson.

Santiago hopes that training with some of the “best minds in the game,” as he called his partners and coaching staff, will help him achieve his goals. The first is to reach the UFC. The second is to create noise in the UFC.

“I believe I’ll reach it soon,” he said. “I just need to stay humble.”

Curtis is the next obstacle standing in Santiago’s way. The Jackson Wink product said that Curtis is a tough guy, but it sounds like the current CES champion is making the mistake of underestimating the challenger.

Santiago believes he has multiple factors on his side heading into the biggest fight of his life. Fight-ending power, killer training partners and deceiving cardio to name a few. But he believes he only needs one advantage.

“I have a bigger heart. That’s the only advantage that I need.”

Based on Santiago’s story and the challenges he’s had to overcome, it’s not too much of a stretch to believe him.