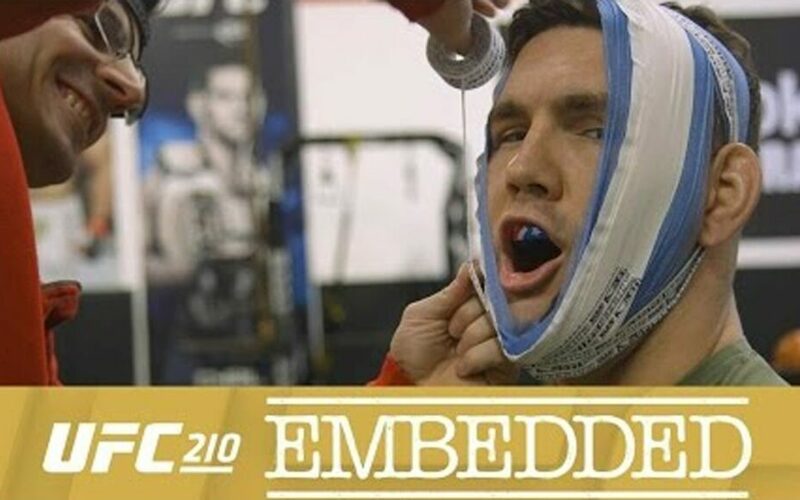 On Episode 2 of UFC 210 Embedded, former middleweight champion Chris Weidman trains a new generation of fighters on his last day of training camp. Opponent Gegard Mousasi breaks down the matchup on a scenic drive to his Leiden gym. Light heavyweight title contender Anthony “Rumble” Johnson stays focused on his striking, as divisional champ Daniel Cormier packs up for a family trip to Buffalo.

On Episode 3 of UFC 210 Embedded, former middleweight champion Chris Weidman packs for his trip to Buffalo, then checks in with the help of entertaining teammate Gian Villante. Light heavyweight champion Daniel Cormier travels in style to a Connecticut media day, where he has a tense exchange at ESPN with title challenger Anthony “Rumble” Johnson. Weidman’s opponent Gegard Mousasi arrives in New York and begins his fight week duties.

On Episode 4 of UFC 210 Embedded, the stars of the event make their way to Ultimate Media Day, where opponents — including light heavyweight champion Daniel Cormier and challenger Anthony “Rumble” Johnson as well as middleweight foes Chris Weidman and Gegard Mousasi — talk the talk. Afterward, Mousasi grocery shops for his post-weigh-in celebration, while Johnson gets fitted for a suit he plans to wear as the promotion’s new champion.

On Episode 6 of UFC 210 Embedded, it’s a tense morning as the stars of the card hit their numbers at the official weigh-in: strawweights Cynthia Calvillo and Pearl Gonzalez, middleweights Chris Weidman and Gegard Mousasi, and light heavyweight champion Daniel Cormier and challenger Anthony “Rumble” Johnson. Later that day, they face off once more in front of fans at the ceremonial weigh-in.