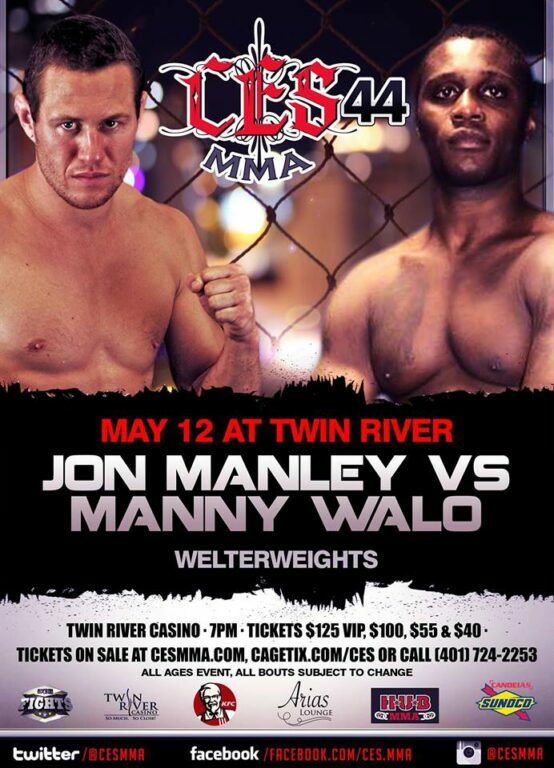 Manley (9-3) is a veteran of the UFC and The Ultimate Fighter where he made it all the way to the semi-finals before losing to Colton Smith in its 16th season. Manley was released from the company in early-2013 following a loss to Neil Magny, and he has only fought three times since. After winning two straight following the release, Manley lost to current UFC welterweight Mike Perry back in November of 2015 under the Premier FC banner. His bout vs. Walo will be his long-awaited return to action, as well as his return to the CES cage for the first time in over two years.

When asked about his return, Manley had this to say:

“I couldn’t be more excited to get back in the CES cage. Manny is a tough guy with a lot of experience, but I will be prepared. I’m going to finish this fight, whether it’s standing or on the ground. A win will be huge for me and my career.”

A winner of four straight, New Jersey’s Walo (11-2-1) is also prepared for battle. The former CES welterweight title challenger and CFFC welterweight champion has only lost twice in his young career, with one of those being his debut as a professional. After losing his debut, the Jersey City native went unbeaten for the next two and a half years, going 7-0-1 in the process. In January of 2015, he was unsuccessful in his CES title challenge, losing to Chuck O’Neil in the first round. Walo has since won four-straight, going 2-0 in WSOF and 2-0 in CFFC.

“Everybody likes a knockout or a submission, and that’s definitely what I’m going for,” Walo says. “I’m prepared to take a strategic risk to finish this fight and show everyone that I’m not someone to be looked past.”