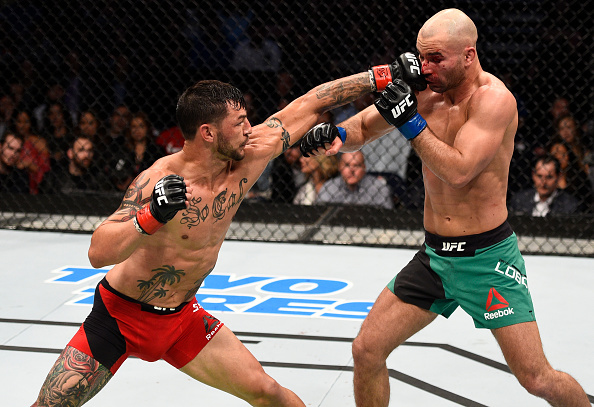 In Cub Swanson‘s last two fights he has come out on top in a couple of hellacious brawls that lasted until the final bell. One was a fight back in December at UFC 206 that many deemed the fight of the year in 2016 against an upcoming killer of a prospect with a chin made out of some sort of new metal in Doo Ho Choi. That fight reminded us all just what kind of viscous creativity Cub can bring into the cage with him. We got another reminder of that in Nashville when Swanson took on Russian/Irishman Artem Lobov in a 5 round battle of attrition that saw Cub take a pretty decisive win while endearing himself even more to MMA fans who we all know will swoon for a fighter willing to engage in a firefight instead of playing it safe. Some fighters make MMA feel like a sport, and some fighters make it without a doubt a FIGHT. Killer Cub is most definitely one of the latter. Now we must ask the question what’s next for Cub Swanson?

What’s next for Cub Swanson?

After back to back submission losses to two of the division’s elite in Frankie Edgar and Max Holloway, one leaving him with a broken jaw, the now veteran Swanson has enjoyed a resurgence in his career and in the minds of fans as well. His only losses in his UFC career have come against the very best competition at 145, and his wins usually come in barbaric fashion. With the current state of the featherweight division all of the sudden Cub has built himself a decent argument for the title shot that he called out for in his post-fight interview at UFC Fight Night 108 after he styled all over the Russian Hammer in the later rounds of their bout. Holloway and Jose Aldo will tangle at UFC 212 in June for the undisputed featherweight title, and looking down the rankings you have a hard time finding anyone more deserving than Cub at this point and you won’t find anyone who will bring a more exciting fight.

Frankie Edgar lost his interim title fight in a fight where he was thoroughly outclassed by a mustachioed Aldo, and he’s currently booked against Yair Rodriguez at UFC 211. Frankie would be a tough sell for another title fight at this point however if Yair were to take out Edgar in spectacular fashion it could very set up a number one contender fight with Cub, and if that happens it has all the ingredients to be one of the most exciting scraps the UFC can put on at this time. Yair’s creativity with his offensive weapons in maybe only surpassed by Swanson himself. More clarity will be offered into the equation after Yair and Frankie enter the cage, but if Cub isn’t granted his wish of challenging the Aldo-Holloway winner in his next fight who amongst us mere mortals wouldn’t hand over our hard earned cash to witness Swanson and Rodriquez throw leather and launch shin bones at each other for twenty five minutes?

Swanson has said that following his last two fights, that one would think have taken quite a toll on Cub’s chin with all the damage he has absorbed even in victory, that he would like to take some time off until December of this year or early 2018. While that certainly makes all the sense in the world and is arguably a smart move for the 33 year old, it may make the UFC brass hesitant to pencil him in as the next title challenger. Depending on the kind of damage the winner of the Holloway-Aldo clash takes the division might not wait for Swanson.It may not be what Cub ideally wants but I don’t think many would complain if once he returns to the cage we get to see a re-charged version of Cub continue this run of fun as hell fights against guys who aren’t the cream of the crop in his weight class.

Short of fighting for the belt one of the best case scenarios for his career could very well be fighting up and coming violent prospects and other vets willing to slug it out with him. He will put on a hell of a show and would likely be favored over just about any fighter that falls within those parameters. Looking into the crystal ball for Cub’s return one could easily imagine a fight night main event featuring Killer Cub facing off with the likes of the Korean Zombie Chan Sung Jung let’s say maybe on next year’s super bowl weekend card. Other options could obviously present themselves between now and then but even if Cub took on the man Jung just defeated Dennis Bermudez you could sell the hell out of those two animals being locked in a cage together. We could also be treated to a rematch with Jeremy Stephens or a war with former bantamweight champ Renan Barao. Who knows exactly what the future holds but whether it’s as a title challenger late in his career or as some sort of viscous gatekeeper in the division we will all be awaiting the beautiful carnage when Swanson steps foot back in the octagon.