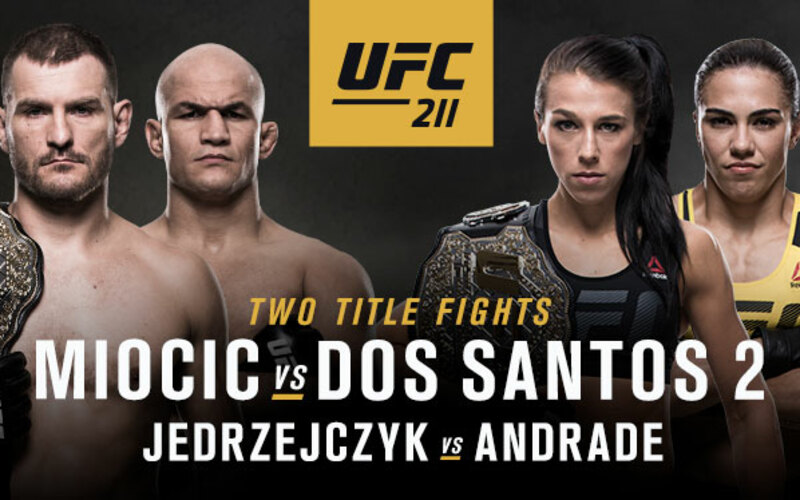 With just two fight cards in May, the UFC is putting everything on the line with an action-packed UFC 211

UFC 211 will take place tonight in Dallas, Texas, before the UFC makes their return to Sweden on May 28. There are a few up-and-coming fighters hitting the Octagon, but all eyes will be on Junior Dos Santos and Stipe Miocic, as Miocic looks to redeem his most recent loss to Cigano.
Joanna Jedrzejczyk will also be defending her belt against decorated grappler Jessica Andrade. While both fighters have shown respect for one another, this has the potential to be a Fight of the Night candidate.

Headlining the card in Sweden is Alexander Gustafsson and Glover Teixeira. What promises to be another slug fest, May looks very promising from a quality over quantity perspective. Even with a stacked card tonight, and a solid event in Sweden, several prospects will be showcasing their talents this month.

Here is a look at the top fighters hoping to climb the UFC ladder in May.

Gabriel Benitez suffered a setback when he lost to Andre Fili in 2015. Fighting just twice in the past two years, Benitez has a lot to prove as he takes on the TUF Latin America winner Enrique Barzola. Barzola is trying his luck at featherweight, and Benitez will be his third test after he beat Chris Avila last November. The winner of this fight should see a nice boost in competition in their next fight.

In a completely open heavyweight division, Chase Sherman and Rashad Coulter could make a splash with a solid performance. While Sherman is looking to save his UFC career, Coulter will be making his debut tonight in Dallas. Coulter, who trains out of Dallas, has everything to gain from a solid debut performance. Sherman needs to be a better defensive fighter, and avoid Coulter’s power. If he fails to do so, this could be a short night, and a short career, for Sherman.

The Swedish-native Jack Hermansson will be able to redeem his second round submission loss to Cezar Ferreira in front of his hometown crowd. Winning his UFC debut against Scott Askham via unanimous decision, Hermansson will take on Alex Nicholson, another fighter looking to get back on the winning trail. He has some versatility, and will need to use his cardio to grind out a win if the striking game fails. Both fighters should come out swinging, but it will be interesting to see who comes out on top.

Germany’s own Jessin Ayari will be hitting the Octagon later this month in Sweden, and will hope to build on his close split decision win against Jim Wallhead. It was a solid striking battle which saw Ayari edge out the win, and landing 23 more strikes in the process. Taking on a much tougher challenge in Darren Till, Ayari will be looking to slow down the very promising English fighter. He is a good finisher, and is riding a seven-fight win streak. A win over a solid prospect like Till should help him land a much bigger fight later this year.

Gadzhimurad Antigulov put on a great debut performance against Marcos Rogerio De Lima, scoring the first round submission and Performance of the Night bonus last November. He is a solid wrestler with impressive grappling, and should be able to showcase his skills against journeyman Joachim Christensen. Both fighters are fairly well-rounded, but there is a good chance this fight goes the distance. As long as Antigulov brings a solid cardio game, he has every chance to continue his winning ways.

After losing his UFC debut, Damian Stasiak came back strong with two submission victories over Filip Pejic and Davey Grant. He finished Pejic in the first round, and was able to overcome the striking game of Grant, and finished him in the third round. Taking on his toughest challenge yet, Stasiak will get a taste of a ranked fighter in Pedro Munhoz. Ranked 12th in the bantamweight division, Munhoz is riding a two-fight win streak with two Performance of the Night bonuses. Needles to say, this fight has the potential to bring fireworks.

Till was a very promising up-and-comer in 2015, but suffered injuries that kept him from competition. Making his return later this month, Till will hope to pick up where he left off against Ayari. Both fighters are exciting, and should present a solid striking battle. Till earned a Fight of the Night bonus in his majority draw against Nicolas Dalby, and won his UFC debut via second round KO/TKO against Wendell Oliveira almost two years ago. Expect the European prospect to be as hungry as ever, as he makes his UFC return.

Marcin Held was a great prospect as he entered the UFC, but was tossed to the wolves with very difficult opponents. The now 25-year old took on Diego Sanchez in his debut, and Joe Lauzon in his second fight. He lost to Sanchez via unanimous decision, but kept it close in a split decision loss to Lauzon. Now taking on Damir Hadzovic, Held has an opportunity to bounce back and showcase his skills in the UFC. He has already fought world class talent, and should be able to demonstrate his abilities against a less-experienced opponent in Hadzovic.

In terms of potential, Abdul Razak Alhassan could be higher. However, plenty of fighters have demonstrated consistent success, which puts Alhassan’s first round KO/TKO UFC debut against Charlie Ward in question. He is a judo national champion in Ghana, and trains out of Forth Worth, Texas. At 31 years old, Alhassan has not fought for very long, but has transitioned well to MMA. He is a well-decorated striker, with seven first round KO/TKO finishes. He will take on Omari Akhmedov in his next fight, which should be his toughest challenge yet.

After a close split decision debut victory against Nazareno Malegarie, Joaquim Silva finished Andrew Holbrook in the first round via KO/TKO last July. He is proving to be a solid striker at the professional level, and has developed his BJJ game over several years. In terms of MMA potential, Silva is looking really good at just 28 years old, and should have his hands full with veteran Mairbek Taisumov. The Chechen fighter is on a four-fight win streak, and has earned two straight Performance of the Night bonuses over his last two fights, dating back to April 2016. If Silva can take advantage of Taisumov’s one year absence, he should see a ranked opponent in his next fight.

Despite an unfavorable MMA record, Marco Polo Reyes has taken the UFC by storm, finishing his first two via KO/TKO, and wining his third straight bout via split decision in Jason Novelli. Reyes beat Cesar Arzamendia in his debut in the first round, and followed that up with a third round finish against the veteran Dong Hyun Kim. He earned performance bonuses in both fights, and looks go 4-0 in the UFC against his toughest opponent yet in Jame Vick. Vick is a decorated Texas boxer, and will be fighting in front of his hometown crowd. If Reyes can pull off the surprise victory, he will surely jump the UFC lightweight ranks without question.

Leading the crop for this month is Jason Knight. He is one of the fastest rising prospects in the UFC, and has continued to impress against better caliber fighters. Ever since losing his UFC debut to Tatsuya Kawajiri via unanimous decision, Knight has gone on a three-fight win streak, with his most memorable performance coming most recently against Alex Caceres. He won via round two submission, and earned a Performance of the Night bonus in the process. It was his second bonus since fighting Jim Alers, and he continues to show impressive versatility.

Taking on Chas Skelly in his next fight, Knight has every opportunity to enter the ranked realm with an impressive win. Skelly is another young, up-and-coming fighter, and putting a stop to his rise could do wonders for Knight. With another impressive performance, and a fourth consecutive win, expect the 24-year old to make a splash in the UFC featherweight division in 2017.