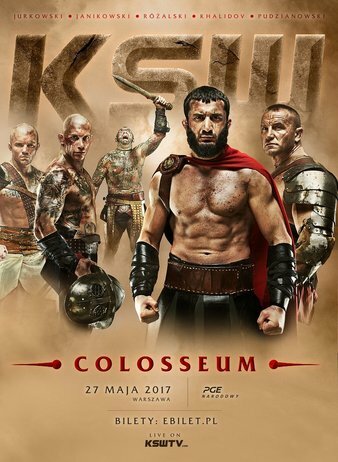 It’s finally here! KSW 39 is happening! One of the most stacked cards – in any promotion – is going down pretty early on Saturday.

The event will be headlined by a Champion vs. Champion main event when KSW Middleweight Champion Mamed Khalidov takes on KSW Welterweight Champion Borys Mankowski at a catchweight of 181 pounds.

That’s not all, though! Along with the super fight in the main event, five – yes, FIVE – title fights will be below it. Fernando Rodrigues Jr. will look to defend his KSW Heavyweight Championship against Poland’s own Marcin Rozalski. In an all-Poland match-up, KSW Light Heavyweight Champion Tomasz Narkun defends his title against a streaking Marcin Wojcik. KSW Lightweight Champion Mateusz Gamrot will look to defend his title & undefeated record when he takes on UFC-veteran “Stormin'” Norman Parke. “The Polish Zombie” Marcin Wrzosek will attempt to defend his KSW Featherweight Title against BJJ-Ace Kleber Koike Erbst. And finally; KSW’s Queen of Violence Ariane Lipski will do battle with Diana Belbita to determine who goes home with the inaugural KSW Women’s Flyweight Championship.

In what should be an absolutely incredible night of fights, KSW 39 is the card you should be paying most attention to. Check out the full card below which will be updated with the live results as soon as the event begins on Saturday!