Volume Against the Counterpuncher: UFC 212 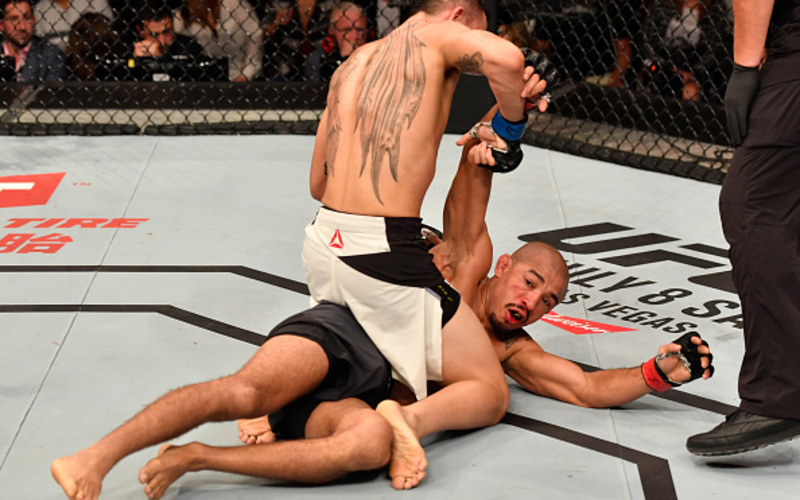 In seeing Max Holloway defeat the great Jose Aldo at UFC 212, it was something that startled me. Seeing Jose Aldo get outthought was something that I did not think could happen. He was such a cerebral fighter that had no equal in terms of making the correct decision. I told myself that I would not believe Aldo would lose a fight that he didn’t get quickly finished in, until I had seen it. And now having witnessed it I will tell my tale.

Volume Against the Counterpuncher: UFC 212

Max Holloway is great. He is awesome. He is cool. Nevertheless, I didn’t pick him to beat Jose Aldo. Now don’t get me wrong, I knew Max has a better shot than most to beat Aldo, but I didn’t expect him to get past the Brazilian’s layered defense and punish him with strikes.

The key to winning fights is to either rack up damage or to control the opponent. The easiest way to do the latter is to throw strikes. The more strikes thrown means there are more strikes that are going to land. This shift has been happening all through the UFC and MMA as there is a large amount of high volume fighters.

The reason for this is simple.  There aren’t enough deadly counterpunchers who can make you pay for opening yourself up so many times. There are always openings when presenting a strike, and the best counterpunchers can not only exploit those openings, but create them. Thus, the pace has be a medium one so that the counterpuncher gets enough information and opportunities to counter, but not fast enough to where he/she is flustered by offense.

Even though Jose Aldo is of the same mold he is a bit different. He doesn’t want a medium speed pace to fight at. The fight has to be at a snail’s crawl. He is at his best when the pace is brutally slow. In a minute and a half he threw three strikes. All three were jabs and the first one that was actually committed to was the last one.  This slow pace is what Aldo thrives under.

Jose Aldo is such a quick thinker and explosive athlete that he needs very little information to understand the fight. Once the pace is set he can explode out of it and flurry with an unexpected barrage of strikes. This is his volume. He may go for two or three minutes at a time without throwing more than five strikes. Then a beautiful 10 strike combination will follow after the senses of his opponent have been dulled.

I’ve been talking about Jose Aldo a lot, but I must give my respects to Holloway. He did win. Holloway is a fighter that pushes an extreme pace in his fights. His strike output is one of the best in the UFC and he uses it to wilt opponents and break them down.

Against Aldo, Holloway started off the fight measuring and reading Aldo. With this is was a guarantee that he was going to take a few lumps, but those gave him the feel for Aldo. He now knew how fast Aldo was. He knew how hard Aldo hit. These would serve him well as he could now finally get timing on Aldo and could be prepared for the strikes that were sure to be coming back at him.

The second round was when Holloway really started to pick up his pace. That combined with his hidden body work allowed him to continue to chip at Aldo without Aldo really knowing it. Replacing his earlier feints with strikes, Holloway continued to force Aldo to move. Aldo had to move his head, he had to move his feet, and he had to do all this on a narrow trigger to avoid getting hit. At first he was capable of this, but as fatigue started to set in Aldo’s inhuman reflexes slowed to just very good.

Instead of fully dodging strikes he would get clipped by them. And Holloway sensing the distance and range he needed to cover to land on Aldo pushed through it and started to land clean. Holloway started to build his game and it degraded Aldo’s. Holloway fed Aldo too many strikes and Aldo began to be unable to react to them.

I would argue that both the first two rounds went to Aldo, but it was clear that Holloway was the one building up steam. Aldo slowed and Holloway connected. Aldo dropped and Holloway pounded. Almost two minutes of destruction later and we have lost a great, but began a new one.

I enjoy just about everything, but MMA is the best thing to ever grace the universe.