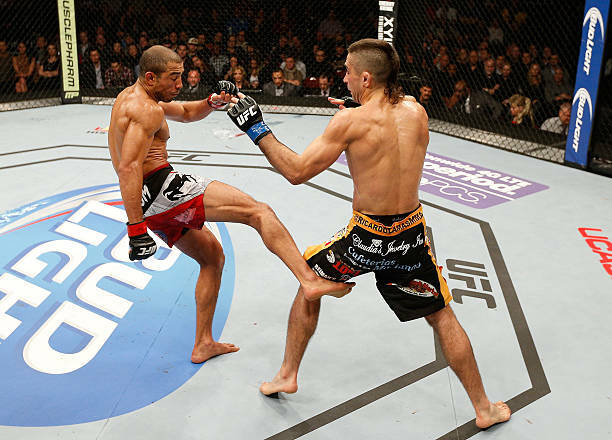 At UFC 212, Jose Aldo’s dominance atop the 145-pound division officially came to an end. There was much debate on the reasons behind this recent loss. Many, including this writer, pointed to a lack of leg kicks which lead to his defeat against Max Holloway. Especially since the Brazilians kicks are some of the most fierce, and dangerous, weapons in his arsenal. Yet the lack of kicks to the leg may have not been an anomaly, and actual proof behind the myth of Jose Aldo’s kicks.

In the early hours of April 25, 2010, fans and analysts were in awe. They had just watched a WEC featherweight title fight between Aldo and Urijah Faber. Aldo would defend his belt that night with a unanimous decision victory. Despite the champ having developed a reputation as a wrecking ball—since he had finished all his previous WEC opponents—this may have been one of his most impressive performances.

Many viewers looked on in amazement as Aldo made Faber’s left thigh look like a slice of filet mignon. It was such a thoroughly successful use of leg kicks that it turned Faber from an ultra-fast offensive fighter, to one that was limping and gun-shy. From then on, when any pundit spoke on the many weapons of Jose Aldo, kicks, and a heavy dose of them, was often first in their breakdowns.

However, statistics show that while it has been a useful weapon for “Scarface,” it wasn’t as essential to his greatness as we all might have thought. Aldo has many marquee victories, but for the purposes of this article we will focus on the fights against Faber, Mike Brown, Mark Hominick, both Frankie Edgar bouts, Ricardo Lamas, and the second Chad Mendes match-up. Aldo has nine finishes in his WEC/UFC career—four of them in the first round. Those short bouts can skew the numbers a bit, so most of those will be left out. All of the above, except versus Brown, were fights that went the distance. Giving us much more information to analyze.

In the aforementioned title fight against Faber, when he was a leg-thrashing machine, Aldo landed 138 strikes. Twenty-seven of which were leg kicks (the most of his WEC/UFC career), which equated to 35 percent of his total strikes landed (the third most over that time). At this point, Aldo was viewed as possibly the scariest kicker in the sport. And understandably so. However, the bouts that sandwich this one tell a different story.

In his title winning scrap against Mike Brown, Aldo landed 44 strikes. Just six were leg kicks. Surprisingly, his wrestling, and hooks heavy opponent landed more strikes to the legs. Yet a lacking of kicks did not stop Aldo from winning the championship with a third round (T)KO. Against Hominick, Aldo landed 131 strikes over five rounds. Eighteen of which were kicks to the leg. It was only 19 percent of his total strikes landed. In hindsight, the rise in output during his win over Faber may have been an outlier, instead of things to come. 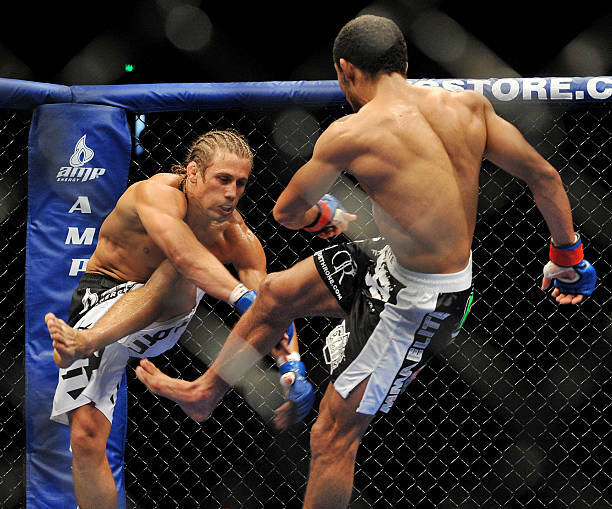 Of all the great opponents Aldo has faced in his career, none begged to be kicked in the legs more than Frankie Edgar. The New Jersey native is the thesis of constant movement. To slow down the former lightweight champion, a prescription of leg kicks would seem a likely strategy right? Yet that never materialized in either fight. Leg kick numbers actually declined from one bout to the next, despite both men landing more in the second of their two bouts that went five rounds.

In their first battle, Aldo landed nine of his 76 strikes (11 percent of the total landed) to Edgar’s lower limbs. In the rematch, four of his 81 strikes landed were to the legs (just five percent of the total). What makes it even more surprising is, like Brown before him, Edgar out kicked the former soccer play in both fights (9-to-22 and 4-23 respectively). This is a compliment to how much Edgar diversifies his attack, but also shows that Aldo beat one of the best fighters of the last decade, twice, by essentially targeting his boxing at the head.

Then came the rematch with Chad Mendes. In a fight-of-the-year war with the Team Alpha Male stalwart, both men landed a combined 207 strikes. Of the 122 that Aldo landed, only six were leg kicks. Once again, making up just five percent of all the strikes he landed over five hard fought rounds.

For this story, the statistics date as far back as Aldo’s WEC debut against Alexandre Franca Nogueira in 2008. Over this 18-bout period, there were only three instances where Aldo had a lower leg kick percentage. One of those was zero, and that was because he only landed two strikes in an eight-second win over Cub Swanson. For the talented fighters that Edgar and Mendes are, a varied attack that included lethal leg kicks would have made sense. Yet Aldo still won all four fights against the pair with his boxing, and of course, going to the head.

The only other time Aldo ever came close to what he did against Faber, was his decision win over Lamas. In that match-up the champion landed 35 percent of his total strikes to the legs (20 of the 85 landed). Adding to the intrigue, is that in these two fights where leg kicks were a primary tool, Aldo had far less significant strikes landed against him. Versus Lamas he was hit with 41 significant strikes, and 20 by Faber. Compared to the other five round fights, where Hominick landed on 71 occasions, Edgar scored 60 times in fight one, and 81 times in fight too, and Mendes landed 77 significant strikes in their second fight.

The reason why Aldo doesn’t kick more, despite the evidence that it benefits him offensively and defensively, is not the focus of this story. It could be injuries (as his coach Andre Pederneiras suggested after his UFC 212 loss), it could be confidence in his boxing, or it could be a lack of fight IQ. Either way, that debate can be discussed elsewhere. In the end, Aldo was always the greatest featherweight ever up until his loss to Conor McGregor.

All signs point to the former champion continuing his career, following losing two out his last three bouts. He is still one of the best fighters in the division, and a first-ballot UFC hall-of-famer. His boxing, athleticism, takedown defense and overall toughness have long been understated. However, when he makes his walk to cage next time, and Joe Rogan runs down the list of his wins and abilities, maybe leg kicks should be further down the list. Since there exists a myth about Jose Aldo’s leg kicks.