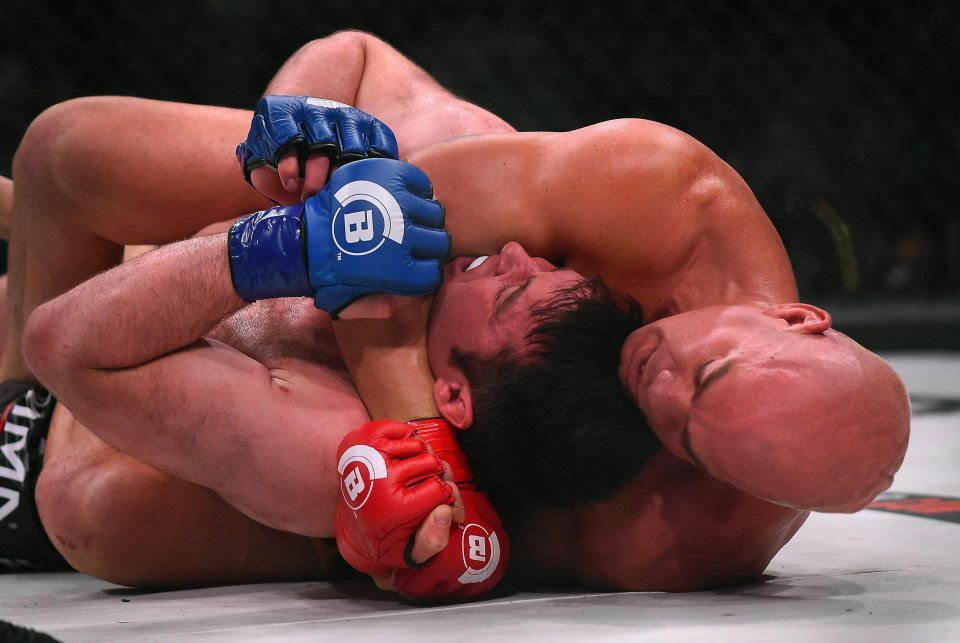 Bellator had one of the biggest nights of the promotion’s existence on Saturday, June 24, when it held a pay-per-view event at Madison Square Garden that featured top names and talent in the sport.

In a funky night that included upsets, great finishes, and a fluke injury, there are some interesting match-ups to be made for the biggest fighters on the card.

Between Tito Ortiz trash-talking Chael Sonnen while the latter was in the cage fighting Wanderlei Silva and Ortiz’s bewildered look during Sonnen’s post-fight victory speech, the rematch between the two sells itself. It’s also relatively clear at this point that Sonnen was brought to Bellator for money fights, and the rivalry rematch between he and Ortiz could sell. Sonnen would look to get revenge for a bad submission loss he suffered at the hands of Ortiz, and Ortiz would get a chance to pummel his rival again. Sonnen reassured fans that he could still fight when he cruised to a dominant decision against Silva after his concerning fight with Ortiz, and Sonnen’s claims that he made Ortiz tap verbally at Bellator 170 would also add fuel to this fire.

While Manhoef has found a home at middleweight, he has fought at light heavyweight before just as Silva has spent a chunk of time at middleweight in the UFC. That provides all the makings for a potential catchweight bout between “The Axe Murderer” and “No Mercy” Manhoef. The anticipated amount of stand-up violence in this bout would have fans both casual and hardcore grinning ear to ear. Odds are, neither man will use any wrestling. Odds are, someone will get finished.

It’s high time that the Bellator championship belt was put on the line, and Mitrione certainly deserves to fight for it after his first round knockout of MMA legend Fedor Emelianenko on Saturday. It is in this situation that a rematch with Kongo would made perfect sense. Kongo took a unanimous decision over Mitrione at UFC 137 back in 2011, and is riding a five-fight winning streak all under the Bellator banner. Mitrione has gone 3-0 in his Bellator career, winning all of his fights via T/KO. At the very least, it would be an intriguing match-up, as Mitrione has certainly evolved since his last encounter with Kongo.

Hear me out. If Emelianenko wishes to keep fighting, and per Ariel Helwani, he does, it may as well be a “legends fight” that would make Vitor Belfort proud. Ken Shamrock is still listed under Bellator’s fighter roster, and while this fight being made would take nothing short of a miracle, it’s unclear who else Emelianenko could fight. As we’ve seen over the past few years, Bellator doesn’t mind pitting old school legends against one another. Fedor-Shamrock would be yet another in a long line of fights that fits the tent-pole theme and would certainly garner the buzz of the MMA world, albeit with a tinge of regret.

Legend fights are fun and all, but for a return to normalcy, let’s talk about the inevitable rematch between Primus and Chandler. Undefeated Primus came in as a heavy underdog and defeated Chandler for his title inside the first round. However, it was a fight marred by an unfortunate ankle injury that led to the bout being stopped. The injury severely hampered Chandler’s ability to move inside the cage and stand up-right, and eventually was ruled a doctor’s stoppage TKO victory for Primus. Immediately following the fight, the two combatants discussed an immediate rematch. Look for that to happen when Chandler’s ankle is healed up.

Lima retained his welterweight title on Saturday night following a decisive unanimous decision victory over promotional newcomer Lorenz Larkin, who had just come over from the UFC. Rory MacDonald, another longtime UFC welterweight success story, recently made the move to Bellator and submitted Paul Daley in the second round in dominant fashion. It’s obvious that Lima vs. MacDonald for the strap is the fight to make.

Larkin may have come up short in his fight for the Bellator welterweight title against Lima, but he made it interesting at times, and is still a very good acquisition by the promotion. A fight between him and Daley would likely bring even more hype than the highly anticipated Lima vs. Larkin bout. Just like a prospective Wanderlei vs. Manhoef clash, Larkin vs. Daley would bring fireworks. The difference would be that this welterweight battle would actually have severe title implications.

Freeman pulled off one of the biggest upsets of the weekend when he choked out super-prospect Aaron Pico inside the first minute of their fight in impressive fashion. Ryan Couture, who beat Haim Gozali earlier on the card, would be an intriguing next test for Freeman. While Couture fought at welterweight in his latest scrap, all 15 of his other professional bouts were at Freeman’s weight class of 155.

Pico’s MMA debut was a night to forget, as it turns out that he bit off a little more than he could chew with the now 9-2 Freeman. If Bellator is wise, they’ll give Pico a more manageable opponent for his next bout. Grebb fought earlier on the same card as Pico and lost via knockout to Bradley Desir. At 3-2, Grebb may not pose the same challenge that Freeman did, but that could be a necessary evil for the sake of Pico’s development.

Bader not only improved to 2-0 over Phil Davis and won his Bellator debut, but he became the promotion’s new light heavyweight champion in one fell swoop with his split decision win. While Bader has talked about a Tito Ortiz rematch as a potential option, the new champion is down to take on more realistic opponents like Linton Vassell and Muhammed “King Mo” Lawal and “clean out the division.” Vassell appears to be the most deserving title challenger, currently riding a three-fight winning streak over Emmanuel Newton, Francis Carmont and former Bellator LHW champ Liam McGeary.

As of now, Davis likely beats anyone in the Bellator light heavyweight division not named Ryan Bader. Unfortunately for him, no one is likely in a rush to see a third fight between the two, and he holds an 0-2 record against the new champ. So, he’ll have to likely rack up a few wins. Lins could offer him a solid comeback opponent, while the well-rounded Brazilian would get the biggest fight of his career. There aren’t many other clear options for Davis, whose last two victories came over Lawal and McGeary. Unless Bellator decides to run-back one of those recent bouts or they don’t give Vassell the title shot, a fight with “Monstro” makes the most sense for Davis.