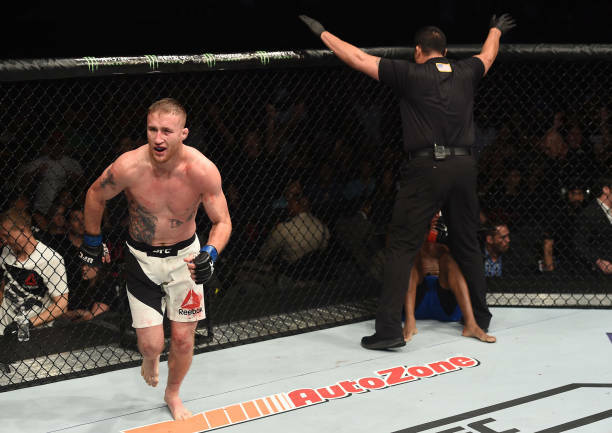 Undefeated lightweight brawler Justin “The Highlight” Gaethje just made his long-awaited Octagon debut, and it was incredible.

People are already clamoring and wondering what is next for one of MMA’s most exciting fighters. Gaethje himself wants to know the same thing, as his first words to Brian Stann during his post-fight interview were “Who’s Next?!”

Gaethje claims to be looking for his “equal”, and through 18 professional fights, he has yet to find that person.

Gaethje made his UFC debut against the #5 ranked lightweight in the world; Michael “The Menace” Johnson, and what a debut it was. 198 strikes were landed combined, and all 198 of those strikes were tallied as significant. Nearly 200 strikes landed in less than 10 minutes of action.

ONE HUNDRED AND NINETY-SIX WERE SIGNIFICANT OH MY LORD HAVE MERCY!!! #TUFFinale (via https://t.co/NDt313f4SE) pic.twitter.com/ZOyZOKGctw

It was a Fight of the Year contender and it showed the world that Justin Gaethje is for real – and also has one of the most fitting nicknames in the sport; The Highlight.

It was an unreal display of heart and power from both men, but in the end, particularly the newcomer.

The fight is over and we have all had time to process the madness that unfolded in that ridiculous brawl. But now the question is; what’s next?

Despite not being ranked, Gaethje surely will be in the next few days after stopping #5 in the world.

We need to remember that lightweight is kind of ‘stuck’ at the moment. The division’s champion is off about to participate in one of the biggest boxing spectacles ever, and the division’s interim title will likely be decided by an eventual (and long-awaited) clash between Tony Ferguson and Khabib Nurmagomedov later this year.

With all that being said, here are THREE potential opponents for Justin “The Highlight” Gaethje’s second UFC bout.

Kevin Lee might be the lightweight division’s hottest prospect at the moment. The 24-year-old boasts an impressive 16-2 record and has quietly risen up the UFC ranks with a 9-2 record in the promotion.

Lee has won five-straight in the last 14 months and most recently defeated Mike Chiesa in the main event of UFC Fight Night 112 in Oklahoma City. Lee called out Gaethje on Twitter shortly after his debut win tonight.

Lee promises to “break Gaethje physically”, and I say; why not let him try? Gaethje is known for his toughness. Mental toughness, physical toughness, it doesn’t matter. Gaethje has all of it.

However, Kevin Lee has proven that he can break guys both mentally and physically, especially as of late. That mindset and gameplan opposite Gaethje would be intriguing because he does that exact same thing.

Lee takes guys down and smothers them mostly. It is effective, but Gaethje does the same thing differently. He brawls with guys and has proven so far that 100% of the time he is tougher both physically and mentally than all of his opposition. He stays in your face until you are broken and can no longer take the punishment.

Gaethje has incredibly high-level wrestling despite rarely ever using it, so Lee may be forced to fight Gaethje’s fight. Or not. And that is why this fight is intriguing to think about.

This thought of this fight happening makes me cringe in the best way possible. Imagine the madness this fight would bring. It would break the internet. Both men throw wild power shots at their opponent, whether it be punches, knees, or leg kicks. The two are similar, but Barboza would have the clear technical advantage over Gaethje who would, on paper, have the superior chin.

The Brazilian is on a role right now. After a losing effort vs. Tony Ferguson in arguably the best fight of 2015, Barboza has since won three-straight. He followed up dominant decision wins over former world champions Anthony Pettis and Gilbert Melendez with an absolutely devastating KO over Beneil Dariush.

How would the #5 ranked Edson Barboza match up with a guy like Justin Gaethje, though? A guy who is seemingly unfinishable. A guy whose forward and in-your-face movement is seemingly unstoppable.

To the above question; I have no idea. But I want to see it. Take as much money as you must to let me see it.

“The Underground King” Eddie Alvarez. A favorite of hardcore fans for upwards of a decade.

Alvarez is known to take part in wars. Whether it be his 2008 brawl with Tatsuya Kawajiri in Japan or his pair of Fight of the Year contenders with Michael Chandler for the Bellator Lightweight Championship. Alvarez is almost always guaranteed violence.

He is 3-2 in the UFC and has a UFC Lightweight Championship win to his name. In his 6th Octagon outing in May, his bout with Dustin Poirier was also quite the war before ending in a disappointing No Contest due to fouls.

(Poirier would have also made this list if it were 4+ instead of 3, he just missed the cut!)

As said above; Eddie Alvarez is almost always guaranteed violence. The flurry he used to put away then champion Rafael dos Anjos was nothing short of spectacular, and it showed shades of what we had seen from him time and time again before entering the UFC.

With that being said; you know who else is always guaranteed violence? Justin F*cking Gaethje. These two would likely sling bombs at one another until one guy was unconscious. And it would be incredible to watch.

Alvarez is a high-level wrestler who sometimes resorts to grinding the opposition out, but it’s silly to assume that’d be easy to do against the D1 All-American wrestler that is Gaethje.

There you have it. The former WSOF Lightweight Champion has arrived. And it could not be more exciting. There are countless potential match-ups for him, and almost all of them are guaranteed to be absolute barnburners.

It is worth noting that Gaethje called out Tony Ferguson post-win.

Hey @justin_gaethje, who do you want next?

Though possible, Ferguson seemed like the easy answer, so we did not include him. And it seems incredibly likely that the UFC re-books Tony Ferguson vs. Khabib Nurmagomedov for the interim strap. So, I refrained from including either of those two.

“The Highlight” has arrived. And his second appearance in the Octagon cannot come soon enough.