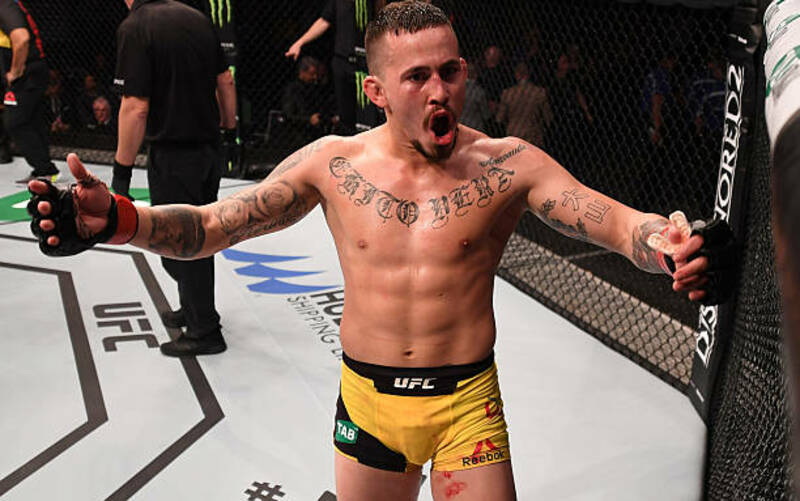 It doesn’t matter to Marlon “Chito” Vera (9-3-1 MMA, 3-2 UFC) whether Brian Kelleher (17-7 MMA, 1-0 UFC) submitted Iuri Alcantara in his UFC debut. Or if their UFC on Fox 25 fight takes place on Kelleher’s Long Island stomping grounds.The Ecuadorian Vera, and Kelleher, will each enter the July 22 bout off the backs of what is arguably the biggest wins in their careers.

Vera rallied for a third-round TKO victory over highly-respected veteran Brad Pickett, in the Brit’s retirement fight in March. Kelleher pulled-off a first round submission over former thirteenth ranked bantamweight Alcantara in Brazil. That was impressive, given Alcantara’s grappling pedigree.

“[Kelleher] beat a ranked guy, but that doesn’t mean anything to me,” Vera told MMASucka. “My last fight was a big fight for me, and I already forgot about that. Kelleher is one more guy I’m fighting. The biggest fight would be a title shot, and I’m not there yet,” said Vera.

“Whenever I’m in trouble, I find a way to survive,” said Vera.

Given that Vera just went to England and beat one of its national heroes in Pickett, facing Kelleher in New York (his home state) doesn’t seem to worry the fighter. Instead of thinking about that, “Chito” will draw on his motivations: his family and dreams. “I will show how much I want the win on fight night,” he said.

One of the most intriguing aspects of the fight between Vera and Kelleher is the prospect that the it won’t go the distance. The each combatant have an 80 percent finishing rate in their professional MMA careers, so whether the fight stays standing or hits the ground, the fight could end at any moment. Vera said he is prepared for whereever the fight takes place.

“Fights start in the stand-up all the time,” he said. “I will fight there and try to finish the fight. If not, I’ll use my other resources. Wherever we go, I’ll be ready.”

One thing that Vera said he doubts will happen is Kelleher winning the fight via stoppage. For all of Kelleher’s finishes, Vera has yet to be finished in his 12-fight career.

He now trains out of Team Oyama, and has gone 2-0 since a decision loss to Davey Grant.

“The reason I’ve never been finished is that I’m always fighting hard,” Vera said. “Whenever I’m in trouble, I find a way to survive. There’s always the chance you’re going to get caught with a punch, but sometimes, you see guys that are tired and let their opponent TKO him. I train hard so that won’t happen.”

Vera said he has significantly improved the quality of his training since making the move from Ecuador to Irvine, California. He now trains out of Team Oyama, and has gone 2-0 since a decision loss to Davey Grant.

“Being at Team Oyama has been great for me and my career,” said Vera–who has defeated Guangyou Ning and Pickett in his last two fights. “I have great teammates and coaches, and that’s the reason [for my late success].”

Vera will look to stay undefeated since moving to the United States, in this scrap against Kelleher on Saturday at the Nassau Coliseum.