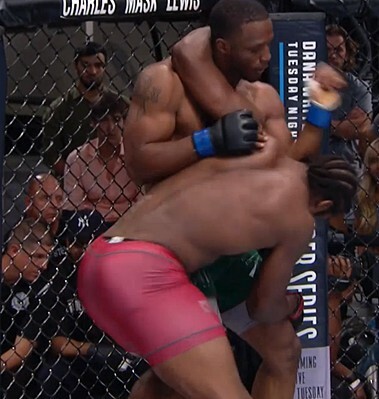 Another solid night of action is in the books courtesy of the Tuesday Night Contender Series.

Two fights ended with unfortunate injuries, but the winners of the other three bouts all showed promise. However, only two fighters received UFC contracts post-fight.

The decision was announced by Dana White moments after the main event.

Karl Roberson (5-0) took out LFA, Legacy FC-veteran Ryan “Superman” Spann in just 15 seconds. The grappler Spann got a hold of the former GLORY kickboxer early. As they were fighting against the fence, Roberson began to launch some short-elbows towards the temple of Spann, landing multiple effectively. The blows forced “Superman” to fall to the mat, and Roberson wasn’t far behind him as he continued to land more elbows on a downed Spann. Referee Jason Herzog saw enough and stopped the fight just 15 seconds into the first round.

Geoff Neal (8-2) is a natural welterweight who had fought 11-days prior to tonight. He replaced Gabriel Checco on short-notice and moved up a division to face Chase Waldon. “Handz of Steel” Neal hurt Waldon mid-way through the opening round with punches. The heavy-handed Neal flurried with even more punches, forcing Waldon to fall to the canvas. Neal did not let up, though. He continued to rain down punches on a visibly hurt Waldon before Jason Herzog stopped the contest at 1:56 of Round 1.

Geoff Neal gets the 1st round TKO after an 11-day turnaround from his LFA fight #ContenderSeries pic.twitter.com/BR8icSQHc0

The other notable omission who did not receive a UFC contract is Hawaiin featherweight, Dan Ige. In the night’s opening contest, Dan Ige improved to 8-1 with a dominant third round submission victory over an incredibly tough Luis Alvarez.

Also on the card; Alonzo Menifield defeated UFC-veteran Daniel Jolly after Jolly received an unfortunate eye injury and admitted that he could not see in between the first & second rounds. Kyle Stewart defeated Jason Jackson earlier in the night as well. Stewart scored a knockdown in round one which really messed up the ankle of Jackson. Early in round two, Jackson’s ankle completely gave out on him, thus stopping the fight.