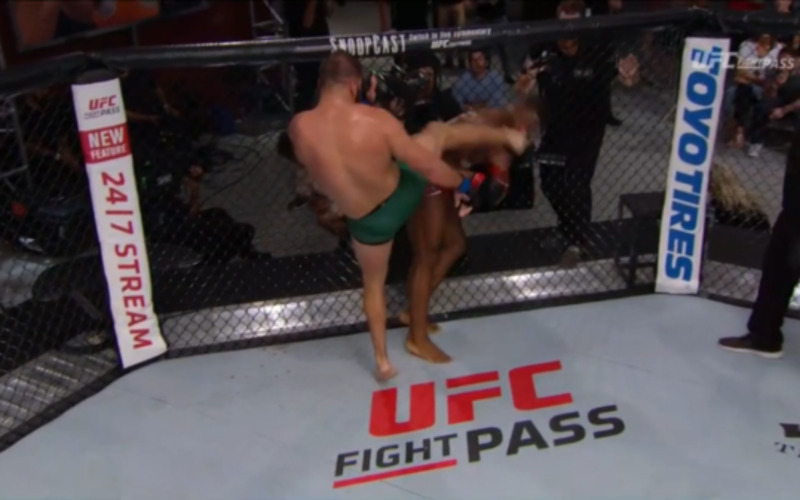 Tuesday Night Contender Series: Week 4 has concluded, and what a night it was.

Arguably the best fights out of any of these shows yet, Tuesday Night Contender Series 4 saw so many fantastic performances that even two fighters who lost, Ronaldo Candido and Austin Arnett, were serious contenders when it came to who would receive a UFC contract.

Julian Marquez (6-1) entered the night having won three-straight, including a quick KO win over UFC-veteran Matt Hamill. Opposite him was WSOF-alum Phil Hawes. Marquez was in some trouble early, as Hawes used his superior wrestling to get the heavy-hitter onto the mat. When there, Hawes continued to dominate and landed some heavy shots. Marquez managed to survive, though. And in round two he began to do what he typically does; land big punches on the feet.

Eventually, as the two broke away from clinching against the fence, Marquez landed a nasty headkick and sent Hawes crumbling to the canvas. It was very reminiscent of Elkins/Bektic, and it was brutal. Even a bit tough to watch the replays. Marquez refused to celebrate, but regardless; an absolutely massive win for him as he solidifies himself a spot on the UFC roster. Look for the finish below along with Mick Maynard, Dana White, and Sean Shelby‘s reaction to the violent finish.

Mississippi’s “KillerB” Brandon Davis (8-2) put his six-fight win streak up against Austin Arnett‘s very impressive 13-fight win streak in what was the night’s unofficial Fight of the Night. It was a bloody contest that nearly saw Davis get choked out before nailing Arnett with a nasty elbow and splitting his forehead open. The two were fighting tooth and nail in a bout that would be named Fight of the Night on a good amount of UFC cards.

Each man landed some huge shots on the feet, and the fight was closed out with a solid spinning back-elbow courtesy of Davis. Post-fight he promised that you will get this type of fight from him every single time.