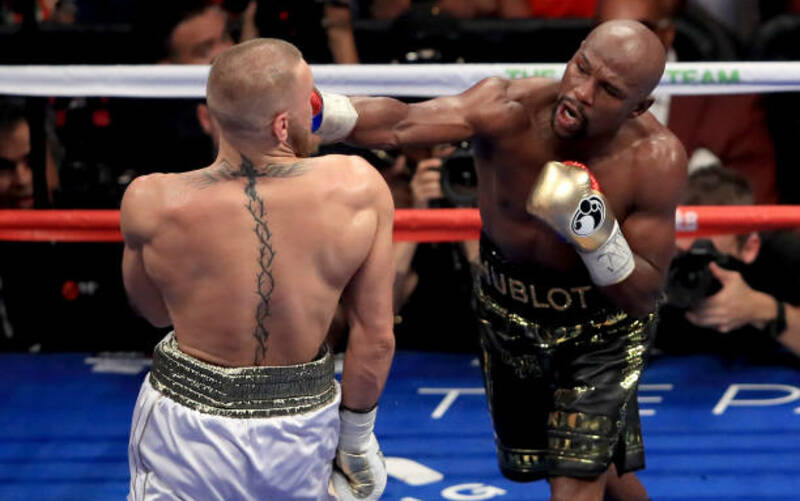 To the surprise of many viewers, Conor McGregor had some early success against Floyd Mayweather. During the fight, the MMA champion, making his boxing debut, accounted himself admirably in the squared circle. But fighting, like marathons, are about how you finish, not how you start. Mayweather proved that he knows this better than most. When boxing with Mayweather, sometimes losing battles wins wars.

You will hear many people touting McGregor’s punch stats as an indication of his success in this fight. While it is true that McGregor connected comparatively well on Mayweather (landing 111/430, according to compubox records) the Mayweather he was fighting was a radically different incarnation to the one who danced around Manny Pacquaio for 12 rounds.

From the outset of this fight, it was clear that Mayweather had a specific strategic gameplan. In many regards, he looked like a typical old fighter. As reactions slow and cardio fades, fighters who dazzled with their speed in their youth tend to fall back on their craft, grit, and power. The Muhammad Ali that fought George Foreman was nowhere near the athletic specimen that embarrassed Sonny Liston. He couldn’t outmaneuver Foreman, and he couldn’t afford to sling toe-to-toe with him. So Ali gambled.

By leaning on the ropes and offering Foreman the opportunity to do what he did best, pound in devastating punches while his opponent was trapped, Ali was able to convince Foreman to empty his gas tank and come back with a knockout in the eighth round. In fact, much of Ali’s career after his return from exile relied upon trying to drag his opponents into deep waters and finish them late in the fight, often while behind on the scorecards.

Sometimes in order to win the fight as a whole, you have to give up something valuable. You need to take a risk and let your opponent have an advantage in order to make them lose sight of the real goal. Floyd Mayweather may not have looked like his old self, but he looked like the best version of an old Mayweather that boxing fans could have hoped for.

The Difference Between Giving And Taking

McGregor has always been an eager fighter. His first fight with Nate Diaz, he emptied his gas tank trying to finish Diaz early, and when he faded in the second round, he was left with nowhere to go. In the second fight with Diaz, McGregor looked much more composed, and was able to manage his energy, not sell out on every shot, and fight all the way to a decision win. The brilliance of Mayweather’s performance in this fight was in how he took over the job of managing McGregor’s energy for him.

In MMA, the real fight is in deciding where to have the fight. A kicker will want to be at extreme distance. A boxer may want to be in the pocket, or on the end of their punching range–if they are an out-fighter. A clinch fighter wants to be in the clinch, and a grappler wants the fight on the ground, or up against the fence. Because there are so many ranges that may favor your opponent, a fighter learns quickly that if they want to win, they must make the most of every moment they are in their own preferred range.

From the outset of this fight, Floyd Mayweather was constantly forcing McGregor’s preferred range. He was not pressuring, he was simply standing where it looked to McGregor like he could hit him. If McGregor wanted to pressure, he would let himself be backed up to the ropes for McGregor to unload.

If McGregor stayed at distance, Mayweather would step into his range, get him to throw, and then back out.

The key to avoiding punches is to be unpredictable. If you back out of an exchange every time, your opponent will anticipate that and follow you. Mayweather’s other option to force McGregor to work, while avoiding damage, was to simply put his gloves up, step in and smother him. Every time he did, McGregor would look to unload shots and step around Mayweather. This lead to a lot of exchanges that looked like this.

A lot has been made of Mayweather’s “cowering”. The shrimping over may not be the most dignified means of defence, but against someone who is looking to skip around to the back the way McGregor was, covering-up and waiting for the referee to separate you is safer than trying to turn to face an enemy you can’t see. McGregor spent a lot of energy trying to move around Mayweather. But if Mayweather didn’t turn to face him, all he had accomplished was moving himself to a position where he could not clearly reach any legal targets.

It would be irresponsible to say Mayweather gave McGregor the early rounds. What he did was make McGregor take them. By constantly putting himself in positions that McGregor liked to operate, he was able to draw shots out of McGregor that McGregor didn’t need to throw. In the first round, Mayweather threw only six punches, and landed two. McGregor could have won the round 10-9 by landing five and throwing twenty. But he took every opportunity to throw that was given to him.

In an MMA fight, winning the first three rounds wins you the fight. In a boxing fight, winning the first three rounds is almost a bi-product. The beginning of boxing fights are normally slow-paced, and most fighters take the time to feel out their opponent before sitting down on their harder punches in the later rounds. Losing two, three, or even four of the first six rounds is irrelevant if it means that your opponent is more tired than you coming into the second half of the fight. Making McGregor work to take those rounds by putting himself in a position to be thrown at may have cost Mayweather a few battles, but the war was only just getting started.

The Fight In One Round

The fourth round of this fight can be taken as a microcosm of the entire fight as a whole. From the opening bell, McGregor came out looking to throw, and Mayweather was happy to indulge him. McGregor drove Maywether to the ropes and attempted to pile on the volume.

After throwing well over a dozen strikes, McGregor let Mayweather off the ropes. But as soon as the pressure eased off, Mayweather marched forward. No longer simply content to wait on the edge of range, he was now trying to walk McGregor backwards. This resulted in a few tie-ups as McGregor again looked to pick shots off on Mayweather as he advanced, but soon he began trying to back out of exchanging range.

This was the moment that Mayweather seized control of the fight. He had realized that giving McGregor many opportunities to land punches early would drain McGregor within the first minute of every round, at which point he would pick up the pace as McGregor looked to recover some energy. McGregor can be a competent out-fighter. In the second Diaz fight he was able to pick-off shots and move in bursts. This is what allowed him back into the fight after gassing badly in the third round of their bout. But Floyd Mayweather is not Nate Diaz. Waiting until you are tired to try and out-fight with a boxer of Mayweather’s caliber is a recipe for disaster.

The whole fight was a story of early leads being dwarfed by strong finishes. McGregor took the first minute or so of every round, then dropped the last two. He attacked every opportunity Mayweather gave him until his energy left him and he looked to recover. It was at that point of every round, the second that McGregor took his foot off the aggression and let Mayweather advance without trying to hit him, that Mayweather knew he could begin to step into range more aggressively and begin opening up on McGregor. Giving McGregor better opportunities than he had given him in the first minute, but which McGregor was now too tired to take advantage of. This is what allowed Mayweather to continuously land hard lead right hands as McGregor tried to create space between them.

One tactic that Mayweather used that can be considered a grey area is his use of the elbow. Instead of using it as a strike, Mayweather would use it to frame and prevent a tired McGregor from clinching him, taking away the only other option McGregor had when looking to escape punching range.

This is a crude tactic, but it is undeniably effective. To be safe, a fighter must be all the way out, or all the way in. By denying McGegor the safety of the clinch, he forced him to back out of range. By getting him to back out, he set him up to be hit with hard shots he wasn’t expecting. This is what added power to Mayweather’s punches, and allowed him to pile up damage on the durable Irishman. We covered Mayweather’s punching power in a previous article.

From the fourth round on, Mayweather upped his own pace considerably. However he was always sure to force a burst out of McGregor every round before opening up with his own offence. By the time the ninth round came, McGregor’s volume dipped for the last time as his energy failed to come back up, and Floyd pounded him mercilessly until the fight was stopped in the tenth.

The Floyd Mayweather that we saw was not the best Floyd Mayweather. Floyd has always excelled in open space and on the counter. His defence is legendary, but he was known for his shoulder roll and head movement. This stalking, high guard, aggressive fighter was an adaptation. Floyd has never had the best high guard. His pressure footwork has never been the strongest part of his game. His power punching has always been questioned. What Mayweather did here was classic old fighter gambling.

He gambled that the high guard would keep him safe enough to force McGregor to work, and that his forward moving footwork would force him to continue to spend his energy when he wanted to take a break. He gambled that even though these were not his best tools, they were the best tools to deal with the type of fighter he had in front of him. And most importantly, he gambled on being able to do enough to exhaust McGregor in the early portion of every round to make his own aggression less dangerous later in the fight.

In the end, it wasn’t a very big gamble. Mayweather, as always, fought a smart fight. But he didn’t fight his smart fight. In this situation, the smartest thing to do was endanger himself early to ensure McGregor’s demise. He didn’t hand anything to McGregor, he made him take it. It wasn’t about winning every second, or even minute, it was about winning the fight. It wasn’t always pretty, but everything worked towards the same goal. He may have lost a few battles along the way, but there is no question about it; Floyd Mayweather won the war.

Beginning martial arts at a young age, Dave has been studying in either Taekwon-do, Kickboxing or Boxing since before he was a teen. Formerly a writer for lasttimeout.com, he has been obsessed with MMA since the late 2000's, and has been using his fight breakdowns as a way of improving his analytical ability and writing prowess with the goal of providing information to others while furthering his own understanding of the wonderful world of Mixed Martial Arts.