What defines a “classic”? To me, when I think of an MMA ‘classic’, I think about important things that have happened in the sport. Whether it be an individual fight, and entire tournament, a whole event, or a specific rivalry. If it made a lasting impression on myself and many other fans, that, to me, qualifies as a classic.

There are seemingly endless of those to choose from in MMA, which is why we love this sport so much. So because of that, this will be a new series on MMA Sucka.

On June 20, 2009, one of the most memorable fights in UFC history took place.

At the Pearl Concert Theater in Las Vegas, Nevada, fan favorite lightweight contenders Diego Sanchez and Clay Guida went to war in the main event of The Ultimate Fighter 9 Finale.

Coming into the contest, Clay Guida had a solid 25-9 record. The former Strikeforce Lightweight Champion had won three-straight, including wins over former TUF winners Nate Diaz and Mac Danzig.

Diego Sanchez was yet another TUF winner, the first TUF winner actually. He entered with a stellar 20-2 record. After competing at welterweight and even middleweight up until this point, this would be Sanchez’s second fight in the lightweight division and he was coming off a solid lightweight debut win against former title-challenger; Joe Stevenson. That win over Stevenson was part of a three-fight win streak.

As seen in this write-up’s main image, the two shared a very intense staredown seconds before the beginning of the fight. Josh Rosenthal was the referee responsible for keeping up with these two wild men throughout.

It took right around three seconds for Diego Sanchez to sprint across the cage and begin throwing bombs at Clay Guida. There was no hesitation from Guida to throw right back, though. At about 13 seconds into round one, Sanchez had landed quite a few solid uppercuts in the exchange that seemed to, at the very least, get a legitimate reaction out of Guida.

And Sanchez refused to slow down, as he then threw a knee which seemed to penetrate the guard of Clay Guida. Another punch exchange followed for a few seconds before Guida lost his mouthpiece. And right as Joe Rogan acknowledged this on commentary, Diego Sanchez threw another hard knee before he continued to flurry, but at a slower pace and with seemingly a bit more method to the madness.

Just over a minute into a fight in which he had his back against the fence defending himself from a wild flurry, Clay Guida scored a much-needed takedown. Guida worked from the guard of Sanchez and managed to land a few decent shots. For the most part, Diego Sanchez defended well. To his credit, Guida neutralized and defended against the stellar jiu-jitsu attack of Sanchez greatly. Right around this point, Joe Rogan says that “the kind of guy that is gonna give Clay Guida problems is a guy with a killer guard”, right before name dropping then 19-3 Shinya Aoki.

After about a minute and a half of solid top control from Guida, Diego Sanchez begins to utilize the rubber guard and manages to use that to work back to his feet. After almost three minutes had passed in the round, referee Josh Rosenthal uses a slight break in the action to get Clay Guida back his mouthpiece. During the brief break, you finally get a good view of the blood leaking from the nose of Clay Guida after that non-stop attack to start the fight.

The fight resumes and Guida is almost immediately floored with a nasty headkick from Diego Sanchez right at the three-minute mark of the fight. The crowd erupts and over the noise, you can hear that Joe Rogan and Mike Goldberg had assumed the kick knocked Guida unconscious. In an incredible display of heart and toughness, Guida recovered and worked his way back up to his feet almost immediately.

Diego Sanchez leaves no time for anyone to be in awe of that headkick and the events that followed because he immediately continues the onslaught throwing flying knees, ruthless uppercuts, and winging hooks. Sanchez shrugs off a Guida takedown attempt before scoring a slam of his own. Sanchez lands in the half guard of Clay Guida. Aside from a short-elbow landing, Sanchez is unable to land anything too significant before Guida works his way back upright right as the round comes to an end.

That was just one round. One round with that much action. It was a tremendous round for Diego Sanchez who got to show off some much-improved striking. And despite being on the receiving end of some brutal shots and flurries, Clay Guida is smiling and clapping as he heads to his corner prior to the second round.

Shortly into round two, Sanchez looks to land another nasty left head kick but Guida anticipated it and defended well. Sanchez looked to flurry some more, but Guida was wise to it and circled to the center of the cage when given the opportunity so he did not have his back against the fence yet again. The corner of Guida advised him to look for the takedown in round two, and 30 seconds in he was given the chance after Sanchez threw a body kick.

Guida gets it to the mat once more and works from guard landing a few decent shots. Sanchez is still giving him hell from the bottom, however, as he begins to throw some hard elbows.

Clay is working his way towards the fence while maintaining top position, he follows that up by defending a pretty solid kimura attempt by Sanchez. After about two and a half minutes of top control from “The Carpenter”, Sanchez attempts to reverse the position by using his feet to push off the cage, but Guida doesn’t allow it. Sanchez once again starts to attack with elbows, but this time they seem to be doing a bit more damage. He throws multiple incredibly powerful elbows that land on the face and head of Guida.

Rogan says that these are perhaps the best elbows from the guard he has ever seen. Mike Goldberg compares it to former Sanchez opponent; Kenny Florian.

After the brutal onslaught, Diego Sanchez is visibly covered with blood… Clay Guida’s blood. The elbows Sanchez threw opened up a good cut on the head of Guida, and he is leaking blood all over the canvas and his opponent. The round ends with Guida on top.

That was about four minutes and thirty seconds of top control for Clay Guida. Certainly a much better round, but there is no question who did more damage.

Despite being on the bottom for the majority of the round, Sanchez landed the much more devastating shots, along with a decent kimura attempt. And once more, despite being bloody (even more so at this point) Guida heads to his stool with a look of excitement on his face. The man is a lunatic, and the fans love him for it.

The third and final round begins with the white on both men’s shorts turning to pink as they are covered in blood.

Through 30 seconds, despite nothing major landing; Guida is having some slight success on the feet. Looking to set-up a potential takedown early with a leg kick as well as some decent straight punches. Sanchez isn’t fazed, but Guida is at least finding some success on the feet ten minutes into the contest. Sanchez just barely misses with a third headkick attempt, looking to have the success he did with the move in round one. Guida whiffs on a right-hand, allowing Sanchez to land yet another hard uppercut. Clay Guida didn’t like that, though. As he shoots in for a takedown that is easily defended by Sanchez.

After a couple striking exchanges on the feet, Sanchez loads up with a big left-hand which is narrowly avoided by Guida who lands a nice overhand in the exchange. Sanchez comes forward with another straight-punch flurry as Guida avoids and connects on two punches of his own. Diego Sanchez attempts a fourth headkick but doesn’t get much from it. In the turning point of the round, Clay Guida carelessly shoots in for a takedown which allows Sanchez to reserve position and take the back of Guida as a result, and he immediately attacks with the choke.

The choke looked quite solid from Diego, but Guida turns out of it and gets the top position he wanted. The crowd erupts. Clay connects with an elbow before throwing a barrage of hooks towards the body of Diego Sanchez.

Guida spends a good amount of time defending a kimura attempt from Sanchez, and as the round ends he begins to go wild with the ground-and-pound attack before Sanchez gets back to his feet right as the final buzzer sounds.

The fight ends with both men raising their arms in victory.  Both seem confident that they did enough to win. During that third round, Joe Rogan and Mike Goldberg discussed the potential for a draw. Citing a dominant potential 10-8 Sanchez in round one, followed up by two 10-9 rounds from Guida to end the fight.

Did Guida defeat his third-straight TUF winner in a row, or did Sanchez get win number two at lightweight? 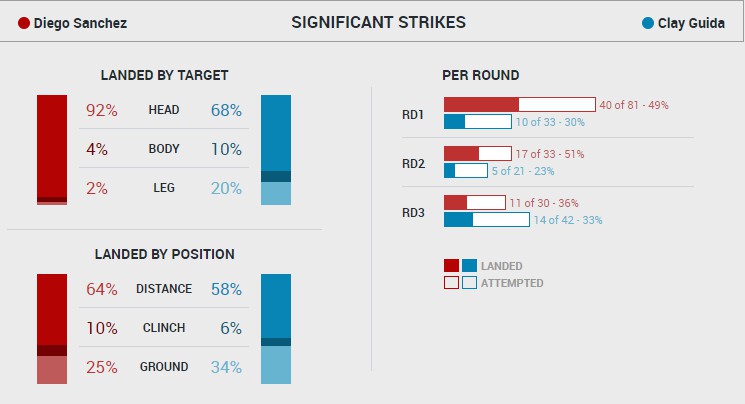 Diego Sanchez in his post-fight speech had this to say:

“The guy has a tremendous chin. There’s a reason he’s never been knocked out, man. He is an animal. [I didn’t get discouraged by that], you know. I was just being patient and ended up just hoping he’d give me an opening for a submission or something. It got really bloody in there, though. I think I opened him up with an elbow or something and from that point on it wasn’t easy.”

Since this fight took place, both men are locks to enter the UFC Hall of Fame in the future. The fight won Fight of the Night at The Ultimate Fighter 9 Finale, and it also wound up being the 2009 Fight of the Year. This was Guida’s 4th FOTN award, Sanchez’s 3rd.

Following the loss, Guida returned six months later and was submitted by Kenny Florian who had just fought for the UFC Lightweight Championship. Guida followed up that loss by winning four-straight against future UFC Lightweight Champions; Rafael dos Anjos and Anthony Pettis as well as former PRIDE lightweight titleholder Takanori Gomi. He was then given a #1 contender match-up against Benson Henderson but lost yet another FOTN winner at UFC on FOX 1.

The win over Guida earned Diego Sanchez a shot at feared UFC Lightweight Champion; BJ Penn. After a very one-sided loss in which he was finished in the fifth and final round, Sanchez returned to the welterweight division and was upset by John Hathaway at UFC 114. Following the defeat, Sanchez won two-straight against veteran welterweights Martin Kampmann and Paulo Thiago. Those wins in 2010-2011 are still to this day the last time Diego Sanchez won 2+ in-a-row.

Both men are still going strong here in late-2017, as they’ve never stopped being known to put on exciting fights for the fans.

If you’re an MMA fan, chances are you have seen this fight already. If not; stop what you’re doing and go watch it here right now! Hey, and if you have seen it; it doesn’t hurt to watch this classic one more time.