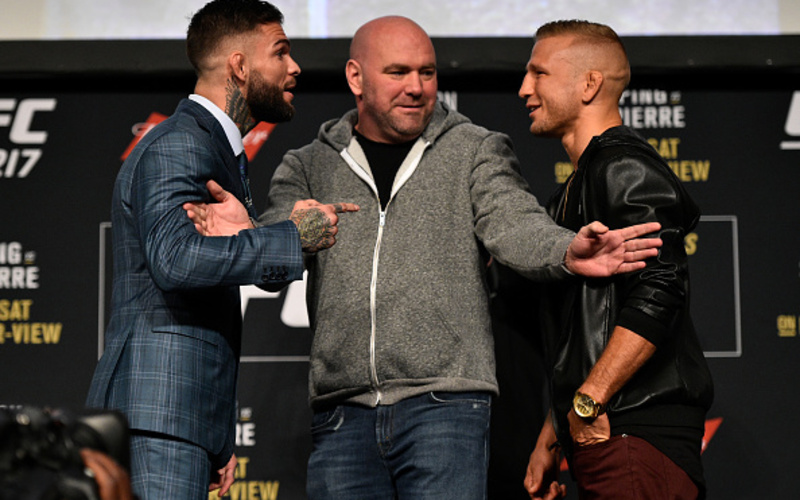 For long-time MMA fans, Michael Bisping vs. Georges St-Pierre might mean a lot more than money fights and new-era UFC business decisions. Despite St-Pierre’s dominance in the welterweight division, Bisping has found a way to keep up with the tide. He is now the UFC middleweight belt, and will take on the Canadian in his first fight back. With Bisping doing everything he can to sell this bout, he finally got his big money fight to headline UFC 217.

Even with the big paydays headed both their ways, one can only hope that this fight delivers. The last time the UFC went to New York, Conor McGregor put on a show, but they do not have their prized-moneymaker to save the day. Though Bisping and St-Pierre will bring in the mainstream fans, and GSP devotees who left the sport with him, there is something to be said about the Cody Garbrandt vs. TJ Dillashaw clash.

This is a real rivalry, and it digs deep for both fighters. Garbrandt’s nickname ‘No Love’ is all too perfect for their upcoming fight, and Dillashaw has done well to embrace the snake tag as well. Those ‘Killashaw’ shirts are a tempting purchase.

Buy your #Killashaw shirt and learn some technique at bangmuaythai.com Support team snake in #tuf25 and get my team shirt #Repost @duanebangcom ・・・ Take down defense while on the cage with Ninja @tjdillashaw n @jarch135 #TeamSnake #TUF25 #BMT

Their Ultimate Fighter season was incredibly entertaining. On top of that, their rivalry became even more apparent with coaches from both teams jumping in the back-and-forth. A Justin Buchholz vs. Duane Ludwig showdown would have made the perfect UFC Fight Pass prelim ahead of UFC 217.

Jokes and animosity aside, it’s all about the skill level that both fighters bring to the table. Dillashaw has fought the best of the best, and has gone from being a kid trying to take down Dominick Cruz, to being a very real contender against current UFC bantamweight champion Garbrandt.

Garbrandt is a younger fighter trying to make his mark on the sport. He is not the most level-headed person, but his fighting skills are undoubtedly spectacular. Many thought his emotions would affect him against Cruz, but he proved that he is a well-rounded, technical and confident fighter. His hand speed and power is impressive for the weight class, and his cardio looked on point in his first five-round fight.

This is not just another wrestler versus striker matchup, but a showdown between two elite, modern-era MMA fighters. They are well-versed in everything, and the footwork is what will make this fight fast and edge-of-your-seat exciting. While Cody’s hands are so good they make his attitude bearable, TJ’s ability to use his footwork to set up his strikes is what helped him dismantle Renan Barao to win the belt.

Destined to Do Battle

In terms of a complete fighter, the edge has to go to Dillashaw. He has not been finished since John Dodson knocked him out in the first round of the Ultimate Fighter 14 Finale. Since then, he has only lost via split decision to Raphael Assunçao and Cruz, and avenged his loss to the Brazilian at UFC 200. At just 31, Dillashaw is finding himself as a fighter. If it were not for the close split decision loss to Cruz, there is a good chance this fight would have already happened. Lucky for us, there has been plenty of time for this hatred to brew even more.

Garbrandt deserves some credit too, especially for accomplishing what Dillashaw could not. His win against Cruz is the highlight of his career, and he did in impressive fashion. He embarrassed the future UFC Hall-of-Famer on a few occasions, and won a well-deserved unanimous decision. Prior to that, he made a poor-man’s McGregor rise in the UFC, by knocking out everyone in his path. It was his finish against highly-touted prospect Thomas Almeida that really put him on the map. After finishing Takeya Mizugaki in under a minute, Garbrandt go the chance to fight Cruz for the belt.

With Cruz dominating the division for so many years, Garbrandt and Dillashaw are truly the two best bantamweights ready to spearhead a new era. Whether it be the animosity, the skill, or simply the storyline, this division rests in both of these fighters’ hands. With that said, these two were destined to fight, and they will finally get a chance to finish each other at UFC 217.