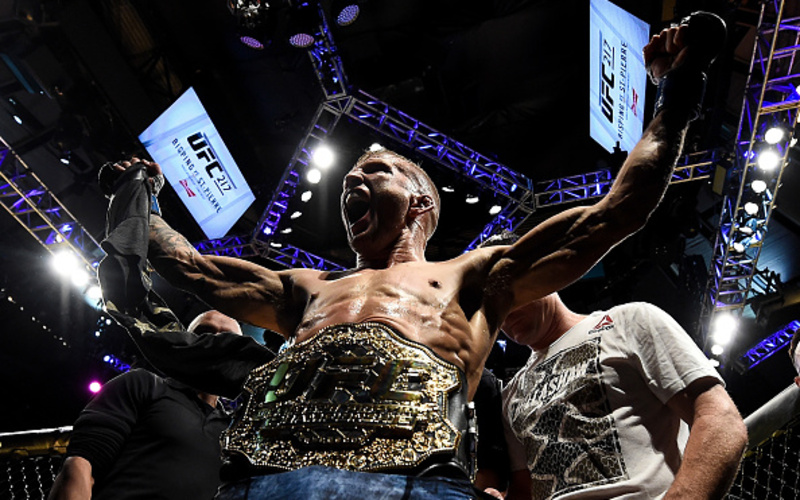 After a brief set back in round one, TJ Dillashaw was able to finish Cody Garbrandt to re-claim the UFC bantamweight championship. Following the bout, Dillashaw calls out Demetrious Johnson, the UFC flyweight champion.

In his post-fight speech with UFC commentator Joe Rogan, he made it crystal clear, “This isn’t the end of Cody Garbrandt. This is my belt. Demetrious Johnson I’m coming for you.”

The hooks have found homes tonight in the title fights ?@TJDillashaw #UFC217 pic.twitter.com/BXNj4lwY79

Dillashaw (15-3) has won his last three fights since losing the title to Dominick Cruz via split-decision at UFC Fight Night 81. He earned the title shot after earning back to back unanimous decisions against Raphael Assuncao and John Lineker.

The victory at UFC 217 was not an easy one, as Dillashaw was able to weather the early storm brought on by former Team Alpha Male training partner Garbrandt. At the end of the first round, “No Love” landed a punch that dropped Dillashaw right at the bell. He came out with his A game in round two and dropped Garbrandt with a hook and finished up with some serious ground and pound to earn the victory.

This marks the first blemish on Garbrandt’s (11-1) record. He had won his last eleven fights, with six of those coming inside the UFC Octagon. The biggest victory of his career came in his last bout, as he was able to capture the 135-pound title in a dominant unanimous decision win over Cruz.