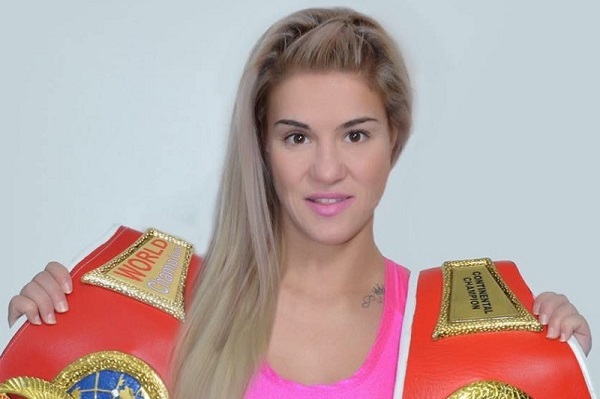 The Kickboxing World Champion, Kallia Kourouni, more commonly known by her stage-name, Pink Tyson, will soon be making her debut in the United Kingdom. The 26-year old champion, hailing from Sparta, will be headlining the action-packed show set to take place on Friday the 24th of November 2017 at the Tolworth Recreation Centre located in Surbiton, a suburb of located in south-west London.

Kourini Fights with Her Fists and Her Feet

Kourouni is the current World Super-Featherweight Champion in the Women International Boxing Federation, or WIBF, and the Global Boxing Union, or GBU. Her record is incredibly impressive as well, with a total of eight fights and no defeats: she has racked up seven wins and one KO and she always puts up an impressive performance.

Kourini’s fists are as quick as her feet, and she has also taken part in both kickboxing and mixed martial arts, at a high level, with not only a world title, but her K1 record reading an astonishing 50 fights, and 49 of these won!

Big Talent to Appear at the Show

Kourouni’s debut in the United Kingdom will present a star-studded performance by some of the top athletes currently making their way through the world of boxing, no doubt drawing the attention of even punters who are stuck like glue to their screens as they enjoy the online pokies NZ has to offer.

Then there is John Joseph John Joe Nevin, a professional boxer from Ireland who is also a two-time Olympian and a 2012 London silver medallist.

And last, but by no means least, rising talent Yusuf Safa will be there, yet unbeaten.

Kourini Will Be Based in London

With all her fights taking place in Germany, excepting for one that is set for Switzerland, Pink Tyson will be based in London, as she plans to focus the upcoming stage of her career, campaigning in Britain.

Her Stage-Name Embodies Both Her Qualities

Kourini’s nickname, Pink Tyson, combines the words Pink to represent her feminine, sweet side outside the ring, and Tyson, in a nod to Mike, which represents her menacing, fearsome aspect inside it.

A Family of Fighters

Kourouni comes from a family of fighters in the Peloponnese area of Sparta. Her father reigned as a champion amateur boxer as well as world champion in Greco-Roman wrestling, and her brothers are also winners in the latter, as well as being involved in the former.

Kourouni had an appearance at the Olympic Games as her first goal, but due to the economic crisis that hit Greece, there was no financial aid available to allow her to take part in the Pre-Olympic Tournament. However, a German manager spotted her in an AIBA World Boxing Championship, which took place in Cyprus, and encouraged her to have a look at pro boxing. This suits her best thanks to her trademark power punches and sheer strength.

Kourouni studied acting and has worked as a dance instructor, but her real passion is for the ring, and her ambitions are high. She has stated that she wishes to become a pro boxing legend, and wear six of the belts before she retires.