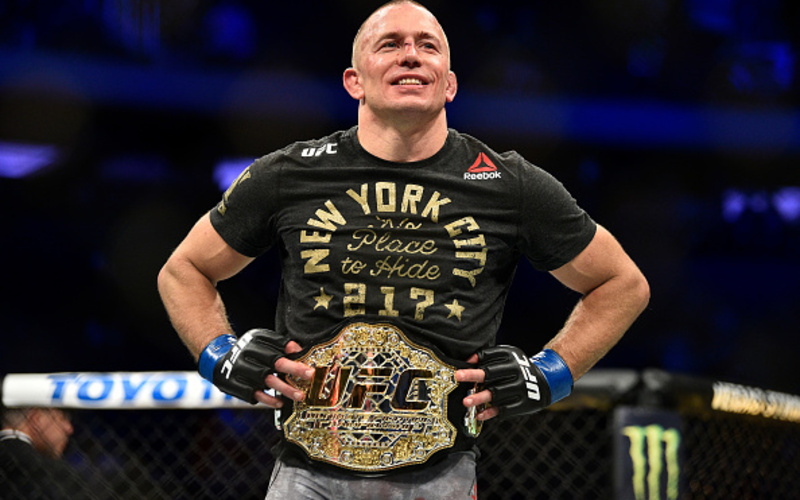 After a short reign at middleweight, Georges St-Pierre is set to vacate his 185 title won from Michael Bisping at UFC 217. After winning the title, St-Pierre revealed he had colitis and did not know when or if he would ever defend the middleweight strap.

According to multiple reports, the UFC is working to have Robert Whittaker defend the middleweight title against former champion Luke Rockhold at UFC 221 in Perth, Australia.

Here is St-Pierre’s statement to the UFC:

“My fight at UFC 217 was one of the greatest nights of my life but I now need to take some time to focus on my health. Out of respect to the athletes and the sport, I don’t want to hold up the division. I will be giving up my belt and once I’m healthy I look forward to working with the UFC to determine what’s next in my career.”

Before and after the fight, Dana White said he expected St-Pierre to defend his belt if he defeated Bisping. After initially saying he intended to defend the belt, he remained non-committal on actually defending the belt. Today, he notified the UFC of his intention to vacate.

The Future of the Middleweight Division

According to sources, Whittaker has been elevated to undisputed champion. He is expected to fight Rockhold pending approval from the athletic commission. Whittaker defeated Yoel Romero at UFC 213 back in July for the interim title. Bisping, the champ at the time, recovered from an injury and took the super-fight against St-Pierre. Whittaker then needed knee surgery and took time off while the division settled itself.

Looking forward, the middleweight division will have its title fight between Rockhold and Whittaker. In the meantime, other contenders will look to continue their rise. Chris Weidman, Kelvin Gastelum, Romero, and Ronaldo Souza are all looking for their shot at UFC gold soon.

As for St-Pierre, he will deal with his colitis, which is inflaming of the digestive tract. It is presumed he will move back down to welterweight, then get an immediate title shot. As it stands, Tyron Woodley would be the matchup, and a fight with St-Pierre is something he’s asked for repeatedly.

We wish Georges St-Pierre well in his recovery process.