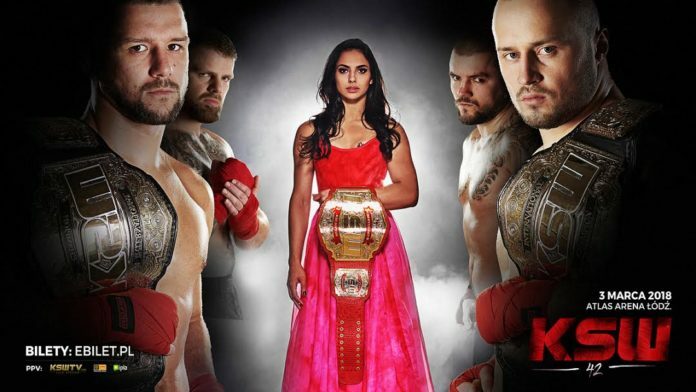 KSW’s first event of 2018 will take place March 3rd at the Atlas Arena in Lodz, Poland. It will be the first time KSW has visited Lodz since 2013 when Pudzianowski defeated Sean McCorkle in front of a sold-out crowd of over 15,000 people at KSW 24.

KSW 42 to feature five of the company’s biggest stars

KSW co-owner Maciej Kawulski had the following to say about this announcement:

“We return to the second largest arena in Poland for the first time in five years. That night we had a historic lineup of fighters and now we return with five of the best KSW champions and legends, with even more to be added. The first event of 2018 will be massive and will set the tone for the biggest year in KSW history.”

Ariane Lipski has shortly become one of the biggest fan-favorites under the KSW banner. At just 23-years-old, Lipski is a perfect 3-0 in KSW. With all three of those wins coming by way of first-round finish.

Mateusz Gamrot has no shortage of high-level wins on his resume. Unfortunately for him, his last two fights against Norman Parke are some notably controversial ones. Though winning the first meeting at KSW 39, Gamrot scored multiple fouls throughout. The two would meet again in a rematch at KSW 40. That fight ended in a No Contest after a fight-ending eye poke from Gamrot.

Tomasz Narkun became the light heavyweight champion in 2015 at KSW 32, stopping UFC-veteran Goran Reljic in the first round. Since then, he has defended the strap three times – all via first-round knockout.

KSW legend Lukasz Jurkowski has been a mainstay in the promotion dating back to their inaugural show in 2004. After a loss at KSW 15 in 2011, Jurkowski was away from MMA for an almost unheard of six years. He returned to the cage in May of 2015 at the massive KSW 39, beating UFC & PRIDE FC veteran; Sokoudjou.

Former heavyweight champion Karol Bedorf has not been seen since losing his heavyweight title to Fernando Rodrigues Jr. at KSW 37 last December. Prior to that, Bedorf had won eight-straight. Including KO wins over James McSweeney, Michal Kita, and Rolles Gracie.

An opponent for each fighter should be announced in the coming weeks!!