Myles Jury Should Have Big Year in 2018, If He Stays Healthy 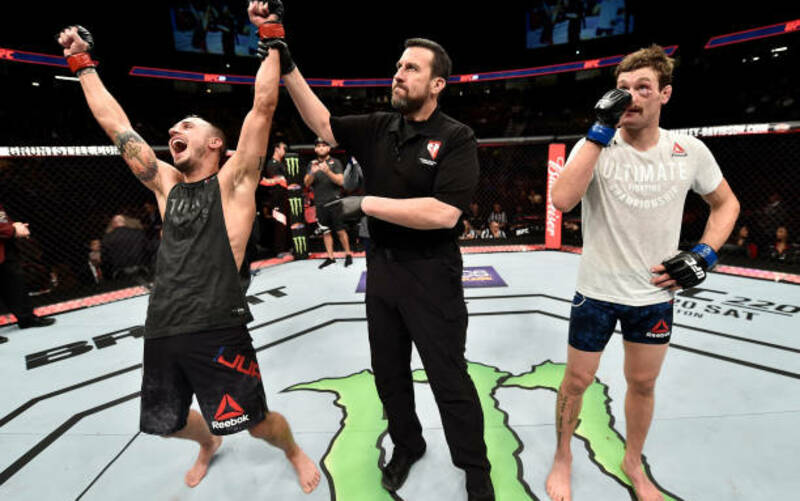 While everyone continues to rave about the freak that is Khabib Nurmagomedov, plenty of other names proved their worth at UFC 219. Myles Jury is one of them, and after a long road, he is now on the cusp of breaking into the UFC featherweight contender picture.

The Ups and Downs

If you are familiar with Jury’s story, you are well aware that he could have been in the same spot half a decade ago. He had all the skill in the world and showed a tenacious attitude in the Octagon. He started his career as a 9-0 pro fighter with the King of the Cage promotion and made the leap to the UFC via The Ultimate Fighter 13 in 2011. After tearing his ACL in the first episode, he returned on TUF 15 as a lightweight but lost a close fight-of-the-season split decision to Al Iaquinta in his first fight.

He roared back with a first-round finish of Chris Saunders on the TUF Live Finale, and went on to beat the likes of Michael Johnson, Ramsey Nijem, Diego Sanchez, and Takinori Gomi. At the same time, Jury averaged just two fights a year from 2012 to 2014 and suffered his only two career losses in 2015.

His only two losses were against tough opponents, Donald Cerrone and Charles Oliveira. The Cerrone loss was nothing short of embarrassing, but it was also against one of the UFC’s best at the time. Cerrone was a hungry lightweight and Jury felt that wrath. He was looking past the veteran heading into the fight, and paid the price for his overconfidence.

Oliveira came in 5.5 pounds overweight, and this was Jury’s debut at featherweight. Not to mention, he also found out about his first child within a month of the fight, which could have easily played a part in his performance. Needless to say, 2015 was a major learning period for the young fighter and, after missing all of 2016, he looks primed for another run at UFC gold.

In an interview with MMAFighting.com after defeating Rick Glenn last weekend, Jury opened up about plenty of hurdles and experiences over the past few years.

Fatherhood, growing up, and just being around the right people have helped Jury get to where he needs to be. At Jeremy Stephens‘ wedding last year, Jury touched based with Eric Del Fierro and it looks like the reunion has been a successful one. Jury is back to training with Alliance MMA, and is finally ready to take his career to the next level.

He was great in his return bout against Mike De La Torre, but showed even more tenacity and fight IQ against a tougher opponent in Rick Glenn. This was also his first fight since returning to Alliance MMA, and the results were obvious. He was happy with his training camp, and looked as confident as ever.

Whether it be physical or mental injuries, Jury has certainly seen his fair share at just 29 years old. The commitment required for becoming a UFC champion is understood by few, but it looks like Jury is slowly figuring it all out. As long as he can keep his body healthy, and his mind clear, Jury should have a massive year in 2018.