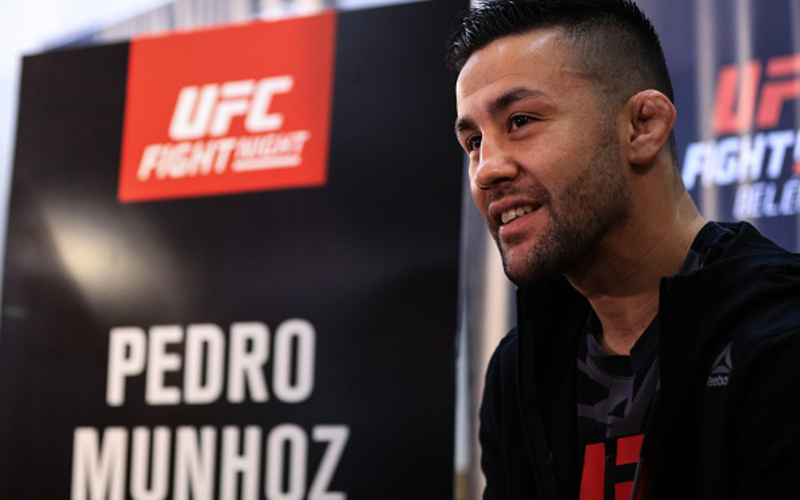 In a division of unheralded fighters, Brazilian bantamweight Pedro Munhoz (15-2) flies under the radar. Glancing at his record, some will write off Munhoz as a gatekeeper due to close decision losses to top contenders Raphael Assunção and Jimmie Rivera. Both highly competitive bouts took place on the undercard, the details remaining a mystery to many.

In spite of this success, Munhoz did not make his main card debut until his last fight, an October bout with Rob Font in Brazil. After winning six of his eight UFC appearances, and four by stoppage, Pedro Munhoz is still the division’s best kept secret.

In terms of marketability, Munhoz has a lot to offer. The native Brazilian charms media members and the layperson alike with his boyish good looks, friendly personality and near perfect English.

A superficial overview of his career may lead someone to think this BJJ black belt is a fighter who leans heavily on their wrestling and grappling game. That’s an area of strength for him, but after primarily training with Rafael Cordeiro at King’s MMA in southern California, Munhoz does most of his work on the feet. True to the gym’s archetype, Munhoz utilizes high intensity pressure tactics, covering great distance with his combinations and usually finishing with hard low kicks.

Many fans first became introduced to “The Young Punisher” during his stint with the RFA, where Munhoz battled and defeated UFC veteran Jeff Curran over five rounds on the world’s most slippery canvas.

The days of the sport are gone where top level fighters can get by being one trick ponies. This is why it is so rare to see a fighter with a “signature move.” The submission threat Munhoz has finished four UFC opponents by “pocket” guillotine choke, three in the first round.

The trap many guillotine specialists fall into is that it becomes a replacement for takedown defense. “Yes, please shoot on me, I will happily pull guard if it means I can get my arms around your neck.” But when your opponent is familiar with that game, they will have drilled proper finishes and mind their P’s and Q’s.

Munhoz, however, does not fit that stereotype. His guillotine finishes often materialize from putting his opponent out of position with striking or stout wrestling. He has a knack for creating panic and capitalizing on major blunders by his opponent. While many pull guard, the Brazilian likes to cut an angle and jump his guard over the arms of his opponent, effectively killing any attempts they may have at popping their head out. Another variation starts the guillotine from the arm-in side, known to some as a “pocket guillotine”.

It’s awesome, see for yourself.

Setting up the Guillotine

Can we all agree “The Young Punisher” nickname needs to go? The guy is 31, it’s a total Faber move.

On top of being nasty with chokes, Munhoz has strong positional fundamentals as well as a dangerous leg lock game to threaten any UFC opponent.

Thus far, Munhoz has been a slow starter. When matched up with more seasoned and technical strikers, Munhoz often lags behind and can get picked apart before he finds his rhythm and starts a high pressure assault. It is when Munhoz is bulldozing forward with big hooks and low kicking non stop that his opponents make mistakes.

For many this has led to “panic wrestling,” opening up his deadly guillotine. In the Jimmie Rivera fight, Munhoz was unable to get a clean takedown and stood with the immensely dangerous striker for three rounds. He surprises many of his opponents with a monster left hook he can uncork from distance as well as in the pocket. It was that exact punch that set up the finish against Font, a skilled boxer.

NEXT FIGHT: vs. John Dodson at UFC Fight Night 125: Machida vs. Anders

In his upcoming bout with former flyweight title challenger John Dodson, we will probably see Dodson attempt to play the matador. For Munhoz, it will be about staying aggressive and forcing mistakes for an opportunistic finish. Dodson utilizes a lot of linear and lateral movement and is a huge power puncher, so Munhoz will need to stay disciplined and make use of his kicking game to cut Dodson off. In just his second main card appearance, a victory would launch him into well deserved title contention.

You can watch Pedro Munhoz vs. #8 John Dodson at UFC Fight Night 125 on Saturday, February 3rd, co-headlining on Fox Sports 1. If you like to root for the underdog, and fancy a tight guillotine, tune in around 11:30 PM EST.