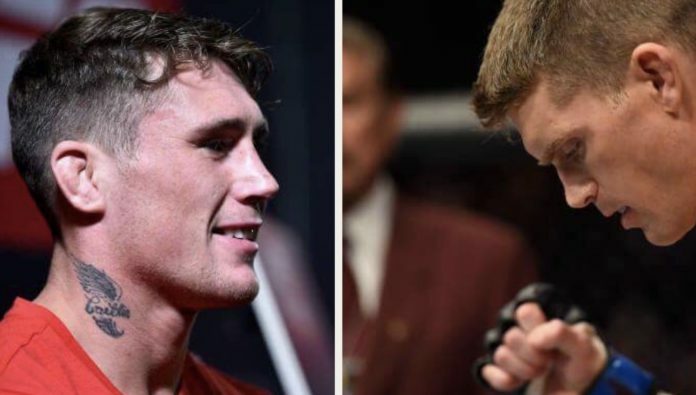 It’s certainly been a long time coming, but it was worth the wait. MMA fans world-wide have been eagerly awaiting a scheduled bout for Darren Till ever since his first round annihilation of Cowboy Cerrone at UFC Gdansk in October last year. During this time, there’s been plenty of speculation and an unwelcome amount of Twitter beef – but it seems a fighter has finally answered the call to face Till and headline UFC Liverpool on May 27th. That man is Stephen “Wonderboy” Thompson, who is arguably the most precise and technically-gifted striker in the UFC. Till vs. Wonderboy is one of the most anticipated fights of the year, but is Darren Till ready to cope with the world class weaponry that Wonderboy has at his disposal?
This announcement certainly caught many people off-guard as Kamaru Usman, an outstanding wrestler on an impressive 7-fight win streak, very publicly threw his name into the hat for this event by blasting Till and calling him out in a heated twitter exchange. This match-up certainly favours Till, as Emil Meek demonstrated huge holes in Usman’s stand-up game during their bout at UFC St Louis in January of this year. However, as a result of Usman losing the standing exchanges, he reverted to controlling position rather than trying to finish the fight. This negative tactic is what cost Usman a main event slot on such a highly anticipated card. It’s possible that the UFC doesn’t want to put so much promotion into Till for him to end up losing via decision in a five-round snooze fest.
Wonderboy enters this contest with an MMA record of 14-2-1, but that doesn’t tell the full story as Thompson was undefeated in 57 professional kickboxing matches – an outstanding record that shows just how accomplished his striking is.
It’s clear that the UFC has faith in Darren Till becoming a superstar. A headline slot in his home city so early on in his career proves that. One of Till’s strongest assets is the huge amount of confidence he has in his ability, but that could be translated into his downfall in this match-up. There’s a reason fighters rarely pressure Thompson, as just one slight miss-step and he’ll catch you with a wicked head-kick, likely ending the fight. If Till is going to get the win in his home city, he may have to adopt a more cautious fighting style, similar to that of Tyron Woodley in his two title defences against Wonderboy.
However, if Till wants to test his metal against the best in the world, then this is his opportunity. I believe he’ll stand toe to toe with Wonderboy and see if he can out-strike him. After all, this is a chance for Darren to prove that everything he has said since defeating Cowboy, is true. A chance to stake his claim as the UFC poster boy (sorry Jimi) for the UK. A chance to become exactly what the UFC needs right now – a huge PPV draw in the Welterweight division.
I’d love to hear your thoughts on how this fight goes down. It’s one of my most anticipated fights of 2018 and I’m certain it’s one of yours too. Comment below who you think walks away with the W at UFC Liverpool, May 27th!