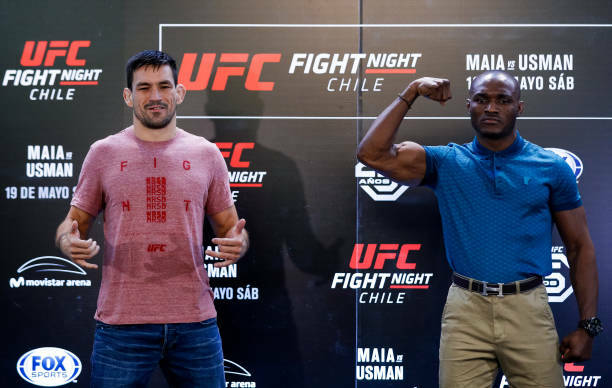 Demian Maia is a 27-fight UFC veteran that possesses some of the best jiu-jitsu skills in the welterweight division. He has also vastly improved his takedown and striking game throughout his very successful UFC career. Kamaru Usman is one of the best prospects currently making his rise in the welterweight ranks. He is an extremely athletic fighter with a very strong wrestling game and his striking is noticeably improving in each of his fights. This is a fight that I believe Usman can win decisively as long as he doesn’t get caught in one of Maia’s crafty submission attempts.

Alexa Grasso is a young fighter that came up through the Invicta fight promotion. She has a very good striking skill set that concentrates mostly on boxing. Tatiana Suarez is also a fighter young in her career and won the TUF 23 championship against Amanda Cooper. She is a solid wrestler that also has strong submissions once the fight hits the ground. If this fight stays standing, Grasso has a good chance of winning. But I believe Suarez will have success at getting this fight to the mat for most of its’ duration.

Jared Cannonier started his UFC career in the heavyweight division but has since dropped down to the light heavyweight division where he has compiled a 2-2 record. He is primarily a striker that tries to finish his opponents rather than attempt to win on points. Dominick Reyes is an undefeated prospect that has looked fairly impressive in his two UFC fights. He has a well-rounded skill set that allows him to bring his opponents to positions where they are at their weakest. I believe Reyes can win this fight in any of the potential positions it can take place within, but he will have the least resistance if he can take Cannonier down to the mat.

Guido Cannetti was a contestant on TUF Latin America 1 and lost his first fight but got a second chance due to an injury that he also lost. He got an opportunity to fight in the UFC anyway and has a 1-2 record with a win over Hugo Viana. Diego Rivas was also a contestant on TUF Latin America 1 and he also lost his first bout on the show. He also got a shot to fight in the UFC and has compiled a 2-1 record leading up to this fight. Both fighters seem to prefer the striking aspect of MMA and I believe they will both go toe-to-toe in a competitive contest.

Andrea Lee is a flyweight fighter that is making her UFC debut after spending most of her career fighting for Invicta and LFA. She is an exciting fighter that has a good kickboxing and submission game. Veronica Macedo is making her second UFC fight after losing a tough fight against Ashley Evans-Smith. This should be an entertaining fight where both fighters will have their moments.

Vicente Luque was a contestant on TUF 21 where he won his first bout but lost his second bout. He has since gone 5-2 in his UFC bouts and avenged his TUF 21 loss against Hayder Hassan with a submission victory at UFC on FOX 17. Chad Laprise was a contestant on the TUF: Canada vs. Australia, and won the competition with a split decision victory over Olivier Aubin-Mercier. Both fighters have looked very good so far in their UFC careers and this should be a very competitive contest.