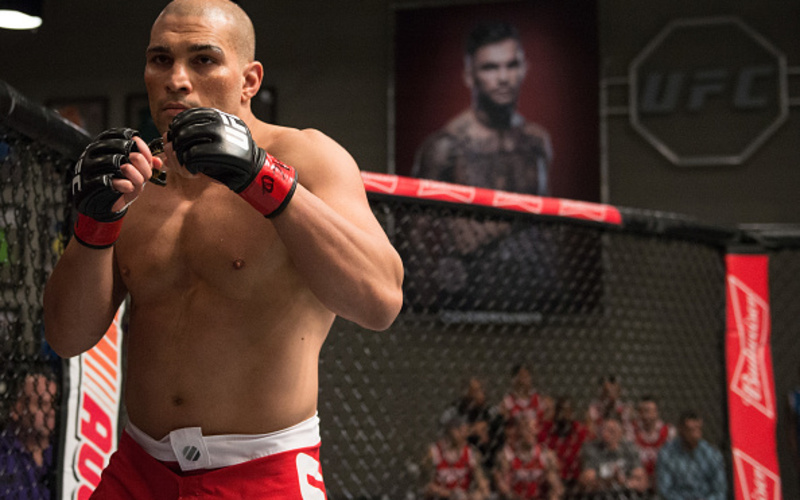 It’s quite appropriate that American Top Team’s Hayder Hassan is currently fighting for Phoenix Fighting Championship. After a rough tenure in the UFC, Hassan has not given up on his dream to show the world what he is capable of.

Hassan will look to use a Phoenix Fighting Championship welterweight title shot as a chance to rise like a phoenix and take the UFC by storm.

Hassan’s parents left Iraq in the late 1970’s and relocated to South Florida. “Growing up was like many other families,” Hassan told MMASucka. “My parents put us in sports as kids. The weather year round here is great so we played every sport. I played football, baseball, basketball, soccer, and tennis. Growing up we were expected to do well in school and our parents wanted to keep us busy so we stay out of trouble.” Hassan’s father was a physician in South Florida. “When I wasn’t in school I was playing for whatever team sport it was that season. I grew up competing and I think that helped me make the man I am today.”

College and the Turn to MMA

“So after I graduated college at FSU [Florida State University] I worked in the healthcare industry,” Hassan said to MMASucka. “I was working for a pharmaceutical company. At the same time, my brother Mehdi had finished football and graduated from Georgetown. Since his freshman year, he was like, ‘if I don’t make it to the NFL I want to fight.’ We just got back from a football combine and that weekend I remember watching Thiago Alves fight and knockout Matt Hughes.” Alves defeated Hughes at UFC 85 on June 07, 2008. Unfortunately for Mehdi, he was unable to live his NFL dream, but the two brothers ventured 20 minutes down the road to one of the best training facilities in the world, American Top Team.

Hassan knew as soon as he entered the American Top Team facility that he had found his true calling. “That Monday we went to ATT, signed up and I did my first Muay Thai class. After my first session, I was addicted. It reignited all the competition juices that I hadn’t felt in years and I became obsessed.” Hassan took on his first professional bout an astounding eight months after starting his training, and won by KO in just nine seconds.

It is no secret in the world of MMA that American Top Team hosts some of the greatest talents and coaching minds in the sport today. “Without a doubt American Top Team has made me the fighter I am today,” Hassan told MMASucka. “It is a revolving door of the best prize fighters in the world! ATT has the most fighters in the big leagues than any other team. You are who you surround yourself with and I surround myself with the best in the game. When you train with the best, come fight night there is nothing you haven’t seen before.”

Hassan has nothing but great things to say about his fellow teammates and training partners. “Every guy at ATT can push you to your limits. Even the guys you’ve never heard of are guys just waiting for their opportunity to show the world what’s up.”

No matter what happens in the future, Mehdi will always be a huge influence on Hassan’s career. “Another huge influence on my career is my brother Mehdi,” Hassan says. “He fights as well and we live together. We share the same dream so it’s great to attack your goals and make it happen with your blood. He is the next champ, promise you that!” Mehdi took a break from MMA after his last victory, which was a first-round submission in August 2015. He was scheduled to make his long-awaited return at Titan FC 43 against Gregory Rodrigues in January 2017, but the bout was canceled. Hopefully, Mehdi will be able to make his return soon in the light heavyweight division.

The Ultimate Fighter: Round 1

On February 28, 2015, the UFC announced the next season of The Ultimate Fighter would occur with a twist. It was announced that American Top Team welterweights would take on the Blackzilians welterweights. The two Florida camps were located a short distance apart and quite the feud was building.

Differing from past seasons, a team-driven approach would be taken to the season rather than an individualized tournament, with eight up and coming fighters from each camp.

Hayder played an instrumental role for American Top Team, clinching the team title in a thrilling war with Vicente Luque.

In the finale, Hassan suffered a loss to current UFC welterweight phenom, number six ranked Kamaru Usman. Though he did not win an individual title for American Top Team, Hassan took a lot away from the experience.

“The Ultimate Fighter is the toughest competition you will ever do and that’s what makes it so great. You’re surrounded with the best coaches, great training facilities and for six weeks you have no cell phone, TV, or any other distraction. It’s just you and your dreams,” Hassan stated. “I learned a lot about myself and what I can endure both mentally and physically. I had three fights in 17 days and I grew so much as a fighter and also as a man.”

The Ultimate Fighter: Second Time Around

Hassan was given one more bout after his initial run on TUF, but was submitted by his rival Vincente Luque. Hassan had a handful of bouts scheduled for the 2016 year but none came through. At the beginning of 2017, it was announced The Ultimate Fighter would be returning with a “redemption” season.

This season would comprise of fighters who had appeared in previous seasons but did not win the whole tournament. The two head coaches for the season would be bantamweights Cody Garbrandt and T.J Dillashaw. Hassan saw high-level competition this season facing Dhiego Lima, Joe Stevenson, and Jesse Taylor. Lima and Taylor, the two losses Hassan sustained, both went on to the finals of the tournament.

“The redemption series I developed more as a fighter and was really able to focus on specific holes in my game and make them strengths. The second season I had three fights in 15 days. That type of frequent fighting against top competition just shoots your fight IQ through the roof,” Hassan told MMASucka.

Life after UFC in Phoenix FC

After the amazing experience gained from TUF: Redemption, Hassan signed on with Phoenix Fighting Championship in 2017. Hassan’s first bout was a disqualification loss to Roger Huerta at Phoenix FC 4 in December 2017.

Hassan refocused and came back to take on top-ranked Ukrainian fighter, Pavel Kusch in the co-main event of Phoenix FC 6 in April 2018. Hassan won with a dominant unanimous decision performance, stopping Kusch’s nine-fight unbeaten streak. Kusch had not suffered a loss since March 2013.

The bout was a title eliminator, giving Hassan the shot to contend in his next bout for the welterweight strap. “I won the fight which secured me the welterweight title shot August 2nd in Dubai. Since day one I have never turned down a fight and have always been fighting the best that’s out there.”

Hassan has his sights firmly set on the future. “After I win this title my goal is to sign with a major organization and start calling out some big name fighters! Whether it’s Bellator or the UFC, I’m ready to show the world I’m back and more deadly than ever! Line them up and I’ll knock them down!!”

Sometimes you have to take a defeat and turn it into a victory. Hassan has taken each one of those tough UFC loses and spun it to become a more talented, deadly MMA fighter. Furthermore look for Hassan to unleash in 2018 and beyond.